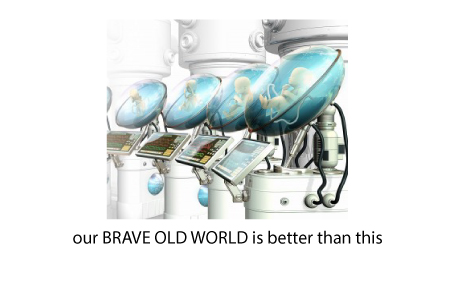 The problem with artificial, motherless children is not that they can't be made to love the corporation or the state, but that they are expensive and create liability
No Responses
Reading Time: 3 minutes
A BRAVE OLD WORLD is better than losing moms

For Mother’s Day, let us consider the repercussions of negligible senescence. When I explain increased healthy longevity, most people bring up a fear of overpopulation; in fact, all real world evidence suggests that it would have the opposite effect: underpopulation.

Why do people procreate in the first place?

The metaphysical purpose of procreation is to avoid annihilation in time. (this becomes more abstract with the addition of hundreds of healthy years and generations of descendants).

The existential purpose is to avoid a sense of regret about missing out on a basic human experience.  (but if you had kids a few centuries ago, you might be tempted to get a pet instead).

The economic purpose is to increase wealth under conditions of harnessing direct earning potential and forming clan alliances (for most situations, children are a net expense and liability, not income and asset).

The physiological purpose is to sustain an addiction to oxytocin, or bonding- or to “feel the love”.  (here again, pets or paramours might suffice)

Imagine a world where people anticipate living hundreds of youthful years and can safely store eggs and sperm for future use?  Will there every be a “good time” to spend 18 years of your life catering to the needs of someone who benefits from your death through inheritance laws?

There are speculative fiction authors such as JBS Haldane and Aldous Huxley (in Brave New World) who predicted the artificial womb and indeed, this technology is right around the corner. There are variables that can be altered to promote a pro-natalist agenda.  For instance, you can create benefits such as day care, health care, and education for their children.  You can make religious and legal prohibitions on contraception and abortion.  And you can provide a universal basic income that scales up with number of children.

The ‘problem’ of overpopulation only exists in underdeveloped nations where there is limited reproductive freedom and where children can be used as low wage workers to enhance wealth.

In developed nations, people don’t even reach replacement fertility (meaning two people have less than two people) and when you add increased longevity and health to the equation, the prospects of spending the rest of your life supporting and being tied to offspring grows even less appealing. Because we are headed to increased longevity and underpopulation, it will probably be necessary to over-subsidize people to have children.

Since the corporations and the coercive tax state are the current major beneficiaries of human lives under the current scarcity economic model, it only makes sense that corporations and governments will be forced to consider ‘growing their own’ children in incubators- but that would be a misstep.

The problem with artificial, motherless children is not that they can’t be made to love the corporation or the state, but that they are expensive and create liability. So even when we transition to a world without scarcity and aging, there will be a constant need for propaganda promoting natural birth and nuclear parenting as the “most fulfilling job of a lifetime”.

But if you are going to live to 500 and already had your kids 400 years ago, would you rather spend 18 years curating a surplus financial node of the state, or would you rather take a scuba trip to the South Pacific until the urge to procreate passes?

For those that control propaganda, economics, politics, and other belief systems, the endgame is not maintaining scarcity and depopulation as some conspiracy theorists might imagine.  To the contrary!

If the state takes over procreation and child rearing, they probably wouldn’t do a great job- but then again, neither do most parents if we’re really being honest.  The best case scenario is where the state continues to partner with nuclear families to outsource the expense of growing taxpayers and soldiers; in that way, the state can continue to keep profit margins and control at sustainably high levels.

I do not necessarily endorse this vision of the future. I am merely reporting what I see.  Like George Orwell, I just have an  “ability to face unpleasant facts”

The choice is not in the hands of the few but rather in the capacity of the many to feel love and act with authenticity.