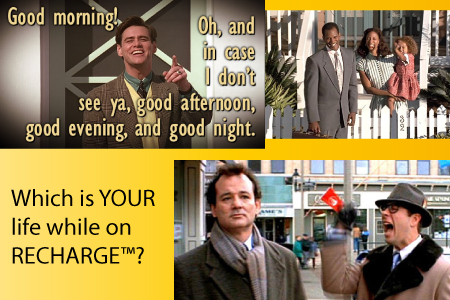 As below, so above. RECHARGE could generate existential hell or paradise, but either case, it only makes your experience of this one day (and of your own self) purer and more efficient while preserving the existence of the human vehicle responsible for generating your reality matrix.
No Responses
Reading Time: 4 minutes
Are you a Phil Connors or a Truman Burbank while taking RECHARGE?

For the last two nights, I have not taken RECHARGE, my adaptogenic supplement that helps to mysteriosly repair stem cells more efficiently.  I wanted to share some observations about the subjective differences of living with and without adaptogens and relate that back to existentialism and Neoplatonism.

When you DON’T take adaptogens, these are the descriptions that I and many of my clients use:

“hard to get out of bed”

In short, it fells like this day is a continuation of days gone by. And funny enough, wouldn’t that be a good way to describe aging? In addition, concerns about a future as yet unfurled weigh heavily.

In contradistinction, when you have 300% sleep efficiency as while taking RECHARGE, here are some typical feelings:

“ready to start my day. Instant on”

“light, good energy, up for anything”

Basically, you find it easier to take this one day as just one day and stay out of the regrets of the past and the anxiety of the future.

I’ve also noticed that having efficient lokahi (balanced flow) and a tabula rasa (clean slate) every day triggers a sort of existential ‘crisis’ or existential ‘bliss’ depending on the internal and external milieu of the person involved.

Bill Murray’s character in Groundhog Day (Columbia 1993), Phil Connors, was anxious to leave the hick town of Punxsutawney for bigger and better things.  The universe insisted that he stay there, reincarnating into that eternal groundhog day until Phil learned some life lessons that would be required to grow and move forward.

What’s nice about this film is that although the conditions of his purgatory don’t change, he gradually shifts into an enjoyment and abundance about his plight that imbues an unlikable jerk with undeniable charm by the end of the movie.

Jim Carrey’s character, Truman Burbank, from The Truman Show (Paramount 1998), was a pretty happy fellow. In fact his tagline was: “Good Morning!  And if I don’t see you later, good afternoon, good evening, and good night.”  That is a person who is content, thoughtful, and genuinely pleased to be connected to people. Two movies, with a pretty similar premise.  The characters were stuck in a hauntingly similar daily ‘do-over’ pattern and although Bill Murray’s predicament was created by some unknown force, we do meet the architect of Truman’s world, Christof, played by Ed Harris: Of course, what makes Truman’s hero’s journey interesting is courageous self-awakening to the fact that there is a manipulative, ratings-hungry demiurge controlling him and that he has the power to transcend and ascend out of his phony world.

But first, let’s back up and ask ourselves, just what is EXISTENTIALISM?

Existentialism is the idea that idealism itself false and that the human experience is not preconditioned upon the “eternal soul” or any order or meaning  It is an inversion of the Alchemists credo of “as above, so below” in the sense that is posits that the lower form, the human experiential animal, is what creates all the realms of idealism and cosmology above him.  Man creates meaning and God serves an important explanatory function in that world view.

A central proposition of Existentialism is that existence precedes essence, which means that the most important consideration for individuals is that they are individuals—independently acting and responsible, conscious beings (“existence”)—rather than what labels, roles, stereotypes, definitions, or other preconceived categories the individuals fit (“essence”).

In the apocryphal Sethian Gnostic schema, there is THE IDEAL MAN (ANTHROS , aka Ialdabaoth, sometimes called the blind god or Satan) who makes the universe and proclaims himself to be god (kinda like the Christof character played by Ed Harris).

Humans are considered to be ANTHROPOS (sometimes ‘the son of man’) which is a probable etymological source for Jesus’ self-reference given the Hellenic/Neoplatonic-steeped syncretic hothouse that created the pre-Nicean scriptures.

It is fun to note the word-play around True-man and Christof (Christ bearer) might suggest a Gnostic inspiration for this movie. In any case, I wanted to ‘come clean’ about the effects of adaptogenic products like RECHARGE.  If you are a fundamentally unhappy person then you will maintain a youthful, perhaps monotonous chance to live in the world of your own unpleasantness until you can die to yourself and grow like Phil, from Groundhog Day.

If you are a happy and grateful person, then you may find enhanced enjoyment of your life and perhaps even become spiritually enlightened as did Truman.

As below, so above.  RECHARGE could generate existential hell or paradise, but either case, it only makes your experience of this one day (and of your own self) purer and more efficient while preserving the existence of the human vehicle responsible for generating your reality matrix.