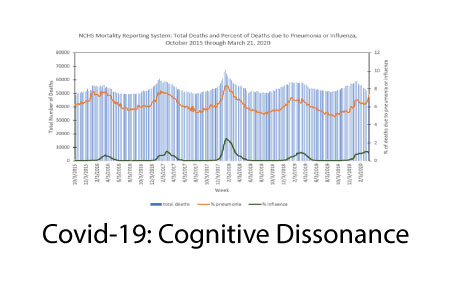 As shown in this chart from the CDC for the last five years, pneumonia and influenza take an average of 40,000- 60,000 American lives and that each year and the peak occurs around March
16 Responses
Reading Time: 8 minutes
Covid-19: Cognitive Dissonance and Cognitive Bias

This is an ambitious blog in which I want to explore the essence of human cognition. To do this, I hope that you will spend a little time with the phenomenon of the spinning dancer where the same image, shaded differently, produces different cognitive/visual perception and bias.

If you look at the gif on the left, then all three images appear to spin clockwise; if you look at the right image, they all spin counterclockwise. Try as I may, when I look at the center image, I cannot make the direction reverse without “cheating” and looking at the appropriate image to reverse the spin.

In time, I might be able to train myself to create a subroutine to reverse the spin without the shading cues but that is not the point. The point is that if you are like me, it is VERY difficult to reverse directions without using appropriate dancer. Even more impossible is trying to get the dancers to spin in the “wrong” direction. So which way is the dancer “really” spinning? There are two quotes that come to mind: The first is attributable to F. Scott Fitzgerald:

In truth, we all have must have first-rate intelligence because we all understand that driving is both “safe” and “dangerous”.

If I were to give test subjects only three seconds to determine which direction the dancers were spinning, then perhaps 45% might say clockwise and 45% might say counterclockwise whereas perhaps 10% might answer “both, neither, or it depends”.

This leads us to the second relevant quote, which appears to be a misattributed quote with the exact opposite subtextual meaning:

“It is the mark of a truly intelligent person to be moved by statistics”.

If you wish to understand where this quote likely comes from and why it was ironically meant to imply the opposite subtext (i.e. “that statistics are boring” then you can read this investigation.

So here we are in the midst of a pandemic and we run up against the problems inherent in the human condition: confirmation bias is inherent in all cognitive schemata and statistics are tools that can be manipulated to prove a point of view. By analogy, if 90% of people say the dancer spins one way, it shouldn’t mean anything to a person who has understood the nature of the illusion.

Cognitive dissonance, or trying to hold two opposed ideas and still function, is a very uncomfortable obligation of the modern age. Earlier in human history, we had such limited access to alternative views, that it was easy to believe that religious authorities held all the answers. Attempts to engage the nuanced power of human intellect once took the form of “how many angels can dance on the head of a pin” but now a post-modern person can question the very existence of angels and the definitions of dancing and the existence of a pin.

When faced with cognitive dissonance, people are apt to change, justify, trivialize, or ignore conflicting beliefs. If an urban person were forced to slaughter animals for a month on a factory farm, they might become vegetarian, justify that animals were treated ethically, state that those creatures are less worthy of mercy, or simply ignore the existence of suffering.

When the secret sauce of fear or tribalism are added to cognitive dissonance, the effects can be particularly toxic to rational thought as people easily justify political assassination, war crimes, and crony capitalism because they raise questions of ethics that feel too daunting to consider. It so unsettling to live with conflicting ideas that much of the human experience consists of trying to choose identities that we can live with just so we can function without Hamlet-like ambivalence or complete paralysis.

In this current Covid-19 situation, we encounter many levels of cognitive dissonance that have degenerated into low-functioning thought paradigms. Here are some examples:

I will close by admitting that my own cognitive bias led me to believe that the disease would be less impactful than it has been. Whereas the numbers of cases and deaths has exceeded my expectations, there are potential problems in the data set that we must acknowledge. Firstly, the false positivity of testing was quite high, secondly, there are financial incentives for municipalities and hospitals to find Covid-19, and finally the dubious practice of assigning Covid-19 as a cause even without laboratory evidence of the virus.

All that said, the examples of Italy (with older patients) and NYC (with late social distancing and aggressive ventilator use) are not the entire story. The majority of nations and their local health systems have not been overwhelmed with cases and deaths. Despite the repeated revisions of  predicted US deaths from 2 million to 200,000 to 60,000, no one knows what would have happened without mitigation but we know that many of the so-called curves appear to have peaked. I certainly do not have the ability to predict what will happen and Covid-19 may have gotten “a late start” but I know that experts have used the worst-case scenarios to justify unprecedented changes to civil liberties and our perceptions of human experience that will have lasting impact upon us all.

Not only has there been a massive redistribution of wealth to “rescue” the corporate banking system, there has been a destruction of wealth, employment, and health benefits for countless Americans who live in a nation without the universal health care that so many other citizens of industrialized nations take for granted.

In the final analysis, as we have learn more from the actual statistics, despite the cognitive dissonance, it appears that the pandemic falls within the usual virulence of the flu-like illnesses and deaths from pneumonia that could have been attributable to previous coronaviruses in previous years. The fact is that no one cared about them and standard of care was to not look for them before. Yes, people have died and that is horrific. Yes, the mitigation efforts may have saved lives. Yes, there may be loss of life from the socioeconomic impact of the shutdowns. Yes, there may be higher rates of child abuse, depression, domestic violence, crime, substance abuse, and suicide from prolonged lockdown. Yes, there may be mitigating medicines and treatments. Yes, the standard of care may been to change with regard to late implementation of mechanical ventilation. Yes, serological testing may have ambiguous results and may be used to approve certain workers returning to work. Yes, there will be a tendency of politicians to extend the shutdown because of their unusual lack of accountability for overestimating risk while not diminishing their own job security during a time of rampant fear. Yes, compulsory vaccination may be proposed as well as mandatory contact tracing and unmasking via smart phones despite privacy concerns. Yes, more people will die and may continue to die from Covid-19, 20, and 21. Yes, relatively more people will die from suicide, malaria, tuberculosis, heart disease, and motor vehicle accidents. Yes, well-meaning people are making questionable decisions with good intentions.

Yes, the dancers can be said to spin in either direction. But no, there in fact are no real dancers except those our mind conjures up. As the data becomes more clear, we will better understand the limitations of our abilities to predict epidemic behavior in public health situations. Accurate and available testing, contact tracing, basic public health measures, and vaccine and serology-based policy decisions may be coming but they need to be weighed against rights to liberty and privacy as well unless and until it can be shown that coronaviruses represent high consequence diseases such as syphilis, HIV, and tuberculosis.

I beseech you all to hold the opposing beliefs that prolonged shutdown of society can be beneficial and harmful and that those assessments are dynamic and should not be based solely on worst-case scenarios by now abandoned epidemiologic models. I also ask that you find the ability to be moved by statistics that might suggest there are larger problems than Covid-19 that we are actively creating and others that we are ignoring. As with the disease itself, it is the reaction of the body that kills you and there are ways that doctors, researchers, and politicians will devise that can guide us through the dangers ahead no matter which direction most believe the dancers are spinning.

I realize that many, if not most, believe that Covid-19 represents something very special. I want to remind you that until this year, we never tested for coronaviruses and they were lumped into pneumonia and influenza-like illnesses. There may be some special angiotensin2 receptor binding properties, gain-of-function proteins, relation to 5G, or abnormal hemoglobin impairment but those are still theories.

As of April 14th, 2020 there have been something like 26,000 deaths in the US attributed to this Covid-19. It will be interesting to know whether the deaths due to other respiratory infections are reported as lower given the dubious presumptive diagnosis practice that the CDC is recommending. Keep in mind that you can and usually do have multiple viruses and bacteria that lead to pneumonia and ARDS and that host factors are the most important in determining who will be most adversely affected.

As shown in this chart from the CDC for the last five years, pneumonia and influenza take an average of 40,000- 60,000 American lives and that each year and the peak occurs around March. I realize you may not be “moved by statistics” but I thought I would try anyway. When you consider total deaths from pneumonia, this may end up being a bad year or merely average. We have to wait and see but in the meantime, there are undeniable costs associated with the “new normal” that can be measured in suspension of civil liberties, joblessness, bankruptcies, foreclosures and evictions, trillions of national debt, and reduction in health care coverage and 401k values.

Many of my readers may be “triggered” by anything with the Fox logo on it; that said, consider the arguments presented by this physician about the financial and political incentives for reporting Covid-19 deaths:

To read the previous six blogs in this Covid-19 series, see below: