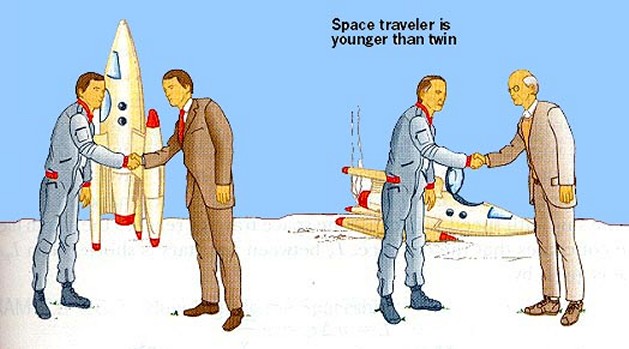 It was recently the 100th anniversary of Einstein’s Theory of Relativity so I wish to discuss the implications of one of his key concepts: time dilation.

You may recall that an identical twin on a rocket or a fast moving train will age slower than his earth-bound twin and thought, “well that isn’t something we can really verify, is it?” Well it turns out that GPS has to allow for the slower movement time when there is less gravity and that the differences in the rate of time passage is quite real.

Now I want you to consider these tail light casings from a new and an old Mercedes that I was stopped behind recently: When the older car was “born” it had a clear plastic tail light like the one on the newer model to the right.  There is oxidation and UV damage that occurs and that is sort of what happens in your cells as well.

I think of the human body as a constantly remodeling system that requires stem cell replication, cell aging and death, and replacement with newer replacement cells.  One big problem is that your replacement library ages along with you, replacing the cells with worse and worse copies.

Secondly, many cells, instead of being aging in function and quick to kill themselves become senescent, like grumpy old men, and because of ecological need or stubbornness, they don’t die off but rather harden and maintain their damaged states, like those old tail lights.

Since our molecules and cells are in constant motion and in a process of creation and destruction, think of aging as a form of gravitas, or heaviness, self-importance, seriousness…

So, when we are in a heightened state of efficient death and rebirth of cells from the activation of the MAPK pathway, as with TA-65, we have less gravitas and perhaps, there is a tiny bit of time dilation, a la Einstein’s theory, associated with a lightness of being, rather than a heaviness.

In other words, perhaps cells that are activated are lighter, more dynamic, and actually experience an iota of slower time passage.  Probably not, but it was worth an attempt to integrate the 100th anniversary of Einstein’s theories into a paradigm of aging.