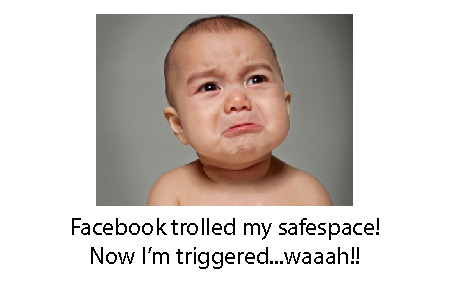 3 Responses
Reading Time: 5 minutes
Fear and loathing in a time of choleric Facebook friends on the verge of a nervous breakdown

I have been triggered. If I have to view another selfie with bought-out politicians or another polemic about how a Trump presidency will be the ruin of us all, I will do the “I’m mad as hell and I’m not going to take it anymore” scene from Network, so help me god. 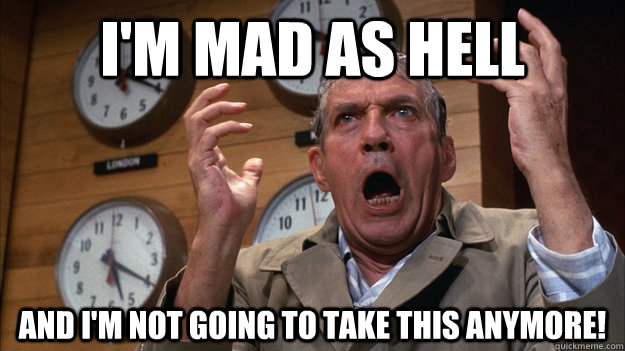 I understand the urge to blame Trump but let’s face the uncomfortable fact that since JFK they have all been middle managers in the Beltway ecosystem that Eisenhower warned us of. More concerning is that since FDR, they have all been treasonous as well. Treason? Strong words, but they vowed to protect a Constitution that explicitly gives the responsibility of declaring war to Congress. Since the last “legal” war of WWII, our nation has killed more than 20 million people in 37 victim nations according to this summary all via the unlawful use of Executive branch powers. The President is the Commander in Chief but not allowed to declare war.

(The Founding Fathers intended “checks and balances” not “blank checks to unbalanced Secretaries of State” and covert agencies).

Although most people can now entertain doubt about the reasons for sending the Libyan and Iraqi people back into the Stone Age, apparently you and your elected officials are now okay with starting another war in Syria over alleged use of chemical weapons.  So the moral argument is that to avenge the killing of children, we should kill many more children so that they can enjoy the benefits of regime change that Afghanistan, Iraq, and Libya (which now traffics human slaves) now enjoy?

Sadly, judging from my Facebook feed, my so-called liberal (aka anti-Trump) friends on Facebook have so completely accommodated to the poison of the falsely dichotomous two party system dialectic that they can no longer effectively function as rational beings. I don’t subscribe to any party, leader, or tribe that would sacrifice our shared values of democracy, transparency, and social justice and that might well describe both wings of the political bird these days.

In case you didn’t realize it,  Trump just switched us back from the Assad/Russian/Iranian side to the Saudi/Israeli/Turkish/Anglo-American side in the Syrian proxy war so we can safely assume that the brainwashing, bribes, or blackmail have worked to bring him under the thumb of the Military-Industrial-Intelligence establishment. After initially attacking Saudi and possibly Western-backed anti-Assad forces, Trump reacted to the alleged chemical weapons attacks by launching a lot of Tomahawk missiles at a Syrian airbase (although he reportedly gave them some advanced warning).

I’m not stating this a moral-equivalency argument but Facebook people are quick to decry murders live on Social media but generally silent about the killing of alleged “terrorists” who may have been receiving their funding and orders from our allies.

If you want to entertain an alternative view to the lauded, Oscar-winning humanitarians known as the “White Helmets”, then read this report from the Swedish Medical Association alleging the staging of recent murders by them. Then watch Journalist Eva Bartlett discuss an alternative view of them as paid mercenaries, founded and funded by Western Covert agencies, and reusing child crisis actors (see minute 15 for this statement). I don’t claim to know the truth but I feel it is a responsibility as an American to at least try to understand what is happening.

According to decorated veteran and Hawaiian congresswoman, Tulsi Gabbard, we needed a law to prevent our nation from funding ISIS and the fact that point man, Howard Dean, wants her out of congress for meeting with Assad and for advising against our continued proxy war against Syria suggests she is striking a nerve with those that are pushing us to another war of regime change in the Middle East.

What other uncomfortable truths are we blinded to by partisan vitriol against Trump?

In case you didn’t realize it, Trump’s billions in operative loss tax write offs can be assumed and are probably legal, but any audit of the trillions spent for the Fed or Defense/Intelligence budgets appear to be of no interest to you.

In case you didn’t realize it, a paranoid North Korea is being marginalized by China and the US (reference Sun-Tzu’s The Art of War recommending never leaving an enemy with no escape). The carrier group is headed to the peninsula to “take care of things” and Japan is ready for their second nuclear war. Meanwhile, the ex-president of South Korea languishes in prison for corruption and because of the emergence of the adherence to following the laws of the land that we have long since abandoned.

In case you didn’t realize it, the Wikileaks Vault7 releases revealed that the CIA has been violating your 4th Amendment rights to privacy for eight years and storing it on servers. So if you get assaulted for not giving up your seat on a United flight then all of the untoward websites you may have visited or off-color things you may have said around an iPhone are now fair game for your future thought-crime trial of public opinion prior to your rendition to Guantanamo.

In case you didn’t realize it, Trump has backslid on his faux Libertarian positions and therefore has lost much of his support from the would-be “swamp-drainers”.

In case you didn’t realize it, while you were so busy wallowing in fear and loathing around some false corporate media narrative, you forgot to state what you believe in and what common goals we share. A spray-tanned misogynist isn’t the greatest threat to freedom and democracy- you are.

So allow me gently remind you that instead of standing against someone who has now been clearly co-opted back to into the system you casually defend, you should try to actually stand for something. I recommend that like the naive Kansan farm boy, Clark Kent, you might try to on a stance of true truth (which you should look for), just justice (which you should struggle through), and the Constitutionally-defined American Way (which we should all hold much more sacred than those inside the Beltway apparently do).

So…write to your congressional representatives and tell them why you are against (or even for) a war in Syria that will cost many lives, be expensive, and create more humanitarian and moral chaos for our world.

A Saturday Night Live skit cleverly lampooned Ivanka Trump as “complicit“ but J’accuse you of condoning illegal wars despite having the hindsight of recent experience to inform you that everything may not be as the experts like Chalabi, Blair, and Powell would have us believe. It isn’t the military, intelligence, or the executive branch that is responsible for drone strikes, fomenting anti-Americanism, and destabilizing the world, it is you that are complicit, coopted, and compromised by allowing the system to strip you of your rights and then stage proxy wars with your trillions of tax dollars without so much as a thumbs-down emoticon to say about it.

“The law will never make men free; it is men who have got to make the law free.”