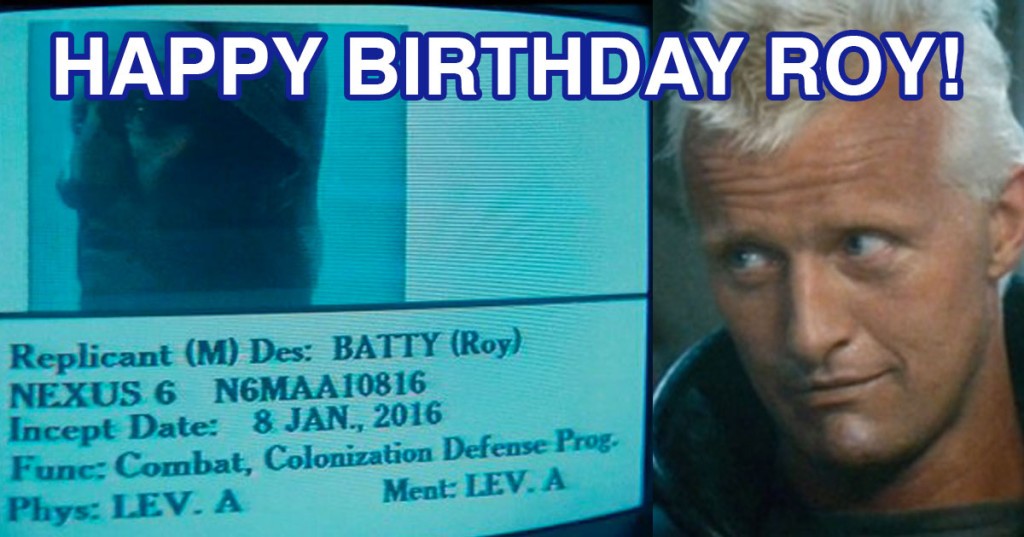 According to Ridley Scott’s adaptation of the Philip K. Dick novel “Do Androids dream of Electric Sheep?”, aka the 1982 movie Blade Runner, Nexus 6 replicant, Roy Batty, was born 1/8/2016. (SPOILER ALERT) The audience unconsciously identifies not with the Harrison Ford character who is trying to neutralize Roy Batty, but rather with Roy, who spends the movie hunting down his human creator and then killing him in an existential-oedipal fit of misplaced rage over his finite lifespan.

In Roy’s sublime final scene, the killing bot decides to not kill his would-be assassin Deckard (played by Harrison Ford) and delivers a poignant monologue about what a waste his own passing will be.  The cyborg realizes as the final moments of life ebbs from him, just how precious all life is (and he thought a human would make a better audience than a dove).


Fans of the movie have long argued that Deckard was human but it appears that the creators of the movie and its upcoming sequel will deviate from the source material in this regard.

Does it matter?  I posted an interesting blog about ahumanism and got into a fascinating discussion with someone on Facebook about the essential differences between human and artificial intelligence that can be fully enjoyed here. Interesting mea culpa here-  because Ray Kurzweil is a prominent central figure in the idea of the Technological Singularity, I assumed he was an atheist.  But I was rather pleasantly surprised to learn from this video that his notions of consciousness and divinity appear to be the same as mine!  Who’d a thunk it?

Even the so-called “Turing Test” of trying to discern human from artificial intelligence is a ruse.  There are many humans, who due to obstinance, autism, or quirkiness, would fail the Turing Test and perhaps that is why those folks with the weak empathy and strong Asperger’s are so enamored with creating “strong AI” to lord over humans.  It is the ultimate revenge of the nerds to create a god that can beat up your god.

So unlike the answers of “weak” AI like Waston, Siri, Google, and Skynet, the fundamental answer to the meaning of living is not to live forever as I blogged about here.

The fundamental answer to the meaning of life, as Roy Batty intuited on the day of his deactivation, was to find and use your gifts to be in the service of others.  So, happy birthday and thanks for saving Deckard so we could enjoy a Blade Runner sequel, Roy!  I’m sure actor Harrison Ford is also grateful to be cashing another huge sequel check as well.