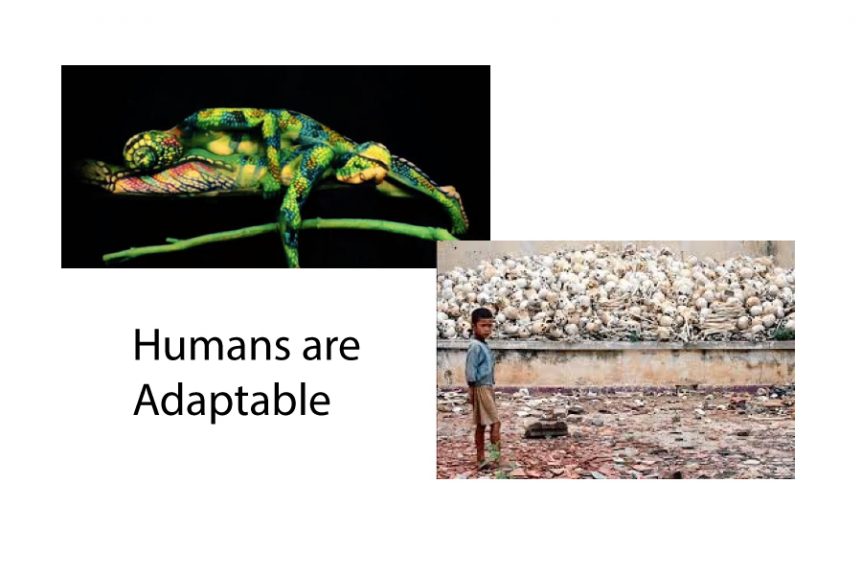 If you were to think about the one thing that makes people special, what would it be? I would say the ability to adapt makes us the most interesting of species. The dolphins are probably wiser, the cheetah if faster, the gorilla is stronger, and the tardigrade is tougher. But there is no species more capable of adaptation than we are.

When I went to the Japanese grocery today, I was reminded of the recent California proposition mandating charging 10 cents a bag to discourage disposable plastic use. No one cares and now everyone is going to remember to bring their reusable shopping bags. When I visited Japan many years ago, I was struck by the efficiency of their hive-culture. At the top tourist attraction, the Royal Palace during the windy cherry blossoms bloom, I went to bathroom and had an epiphany. There was no hand dryer and no paper towel dispenser. Puzzled foreigners were wiping their hands on their clothes but the message was clear: don’t forget your handkerchief. Japan is one of the most forward-thinking environmentalist countries, possibly because of the animistic Shinto roots.

I write very often in the Korean Spa near my home and in the gender-segregated section, men walk around naked. No one thinks twice. I go to yoga daily and don’t wear a shirt because of the 103 degree temperature. I don’t think twice. But if I am not at a beach or pool, you won’t get me to take my shirt off let alone walk around naked. We adapt.

Adaptation can be a wonderful thing like this 4-yo able to speak 7 languages:

Or this mind-blowing acrobat performing in a wind chamber:

Adaptation is morally-neutral. You can adapt to stuff like being abused in the Stockholm Syndrome or to not holding a grudge if your dad drags you up a mountain to kill you because he hears voices. You can adapt to killing people in a concentration camp or a drone command center.

What are you going to adapt to? Your own horrible thoughts about scarcity and inadequacy? Or your own beliefs about abundance and gratitude? The choice is yours.

Watch this video to learn how adaptogens make you more flowing. Who you choose to be is still largely up to you, thank goodness. Shun that wearable tech, people, the bidirectional internet of things will swallow you into the matrix soon enough if you don’t…