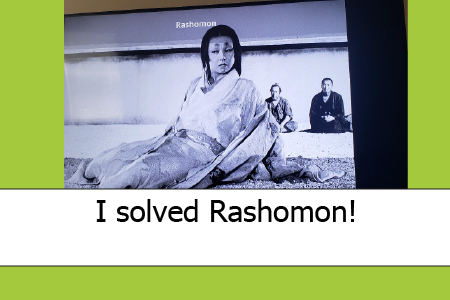 It only took 59 years and three viewings but I believe this is the best fit interpretation for the wonderfully perplexing story
No Responses
Reading Time: 6 minutes
I think I figured out the movie Rashomon

Last evening, I watched Rashomon (1950) with my sons and in the moments before I slept, my intuitive mind came up with what I believe to be the “answer” to the confusing story. Perhaps it was my third viewing making the emotional details less distracting and more enlightening, but I truly believe there is only one interpretation. SPOILER ALERT: don’t read this if you haven’t seen the movie.

The method I used was a sort of quantum computing method that I describe in this blog. My mind, which like yours, takes in all information and weights it by emotional impact as I explain in my meta-tag theory of consciousness in my book, The Telomere Miracle, assumed that everyone had an emotional truth and a convenient truth (which was often lies).

I submit there is one best fit explanation that I can’t seem to find on the internet despite 69 years and countless millions of views: the rape of the wife was followed by the wife’s murder of her own husband. Later, in despair, she shot the bandit full of arrows. Both the bandit and the ghost of the husband try to exonerate her in their lies but she actually confesses to the extent that her conscious mind and Kurosawa’s lens will allow.

Let us use a filter of motivation driven by emotion. to examine each person’s recollection. First off, the bounty hunter has no reason to lie as his reward is secure and he is not a witness. He oddly glosses over the fact that the bandit, Tajomaru, is shot with arrows and the audience is too distracted to wonder who shot them. I submit that women were trained in archery and the wife’s own story puts her at the river trying to drown herself in guilt. She shot and incapacitated the man who promised to absolve her guilt and despair with his love and devotion that is expressed multiple story versions. It is clear from his non-reaction from being accused and slapped at the temple by the loud-mouthed bandit that the woodcutter did in fact steal the pearl-handled knife. The actor reveals this multiple times in the movie when he strongly asserts there was a sword fight. In fact, the versions of the wife and the husband show a much more intimate killing with just those two present near the time of his death. What is also clear from the husband’s account of dying is that the knife was sticking out the husband’s chest and that removal of it was the last thing he remembers. If the knife was in the heart, then removal of it would cause more rapid death by blood loss and the woodcutter has all the motivation in the world to hide his petty crime and invent a sword fight.

Tajomaru outright tells us that he knows he is going to hang and by nature and it appears that has no reason to lie. But wait! His story, like the woodcutter, has some glorious 23 sword crossing battle that can’t have happened if the man was killed by knife. His emotional truth is that he fell victim to an intoxicating lust for the woman. He also asserts that he had no intention of killing the man and in multiple versions, he cuts the ropes restraining the husband. He lies because he doesn’t want his beloved but grief-stricken woman whose life he ruined to suffer the consequences of killing her husband in the court of law. The ghost of the husband gets us a little closer to the truth. He is forced to watch the rape of his wife and he admits to seeing that “she never looked more beautiful.” Instead of being a perverse account of a cuckold, he merely states what is true and what is alluded to other accounts. Some minute part of her, whether pragmatic, romantic, or animalistic, was caught up in the act. Perhaps momentarily, she entertained the idea of running away with the bandit, but more likely she just felt humiliation and hopelessness after. The ghost is there because it is still burdened by the shocking decision the wife made to ask Tajomaru for his own murder to cover her shame. The husband’s ghost says he “was ready to forgive him” for Tajomaru’s offer to let the husband decide the wife’s fate after that betrayal (53:10) Owing to his own guilt for being duped, unable to defend them, and then emotionally rejecting his wife, he creates a redacted version of reality to protect her from the consequences of her actions. He merely says “someone is crying” and then the wife’s precious knife is placed in his chest; Kurosawa shows us the husband doing it to himself, but is that what really happened? The ghost does recount hours alone during which the bandit and the wife were racking their minds as to how to proceed.

The wife’s account is the most filled with emotional and factual truth. After the rape, she is left alone with her husband who probably has had the ropes cut as per Tajomaru’s account. She sees “not anger or sorrow” but rather emotionless contempt on his face, which is something that she cannot abide. In her version, she approaches him at the 43 minute mark and lurches into him with a knife as the camera cuts to black. She states “I must have fainted”. She must have left with the bandit and the arrows, but not the valuable knife which was sticking out of her husband’s chest until the woodcutter arrives. She confesses to later trying to drown herself in the river, which is where we later find Tajormaru shot up with arrows.

My interpretation is a “best fit” for all the emotional truths and the credible factual accounts. The lies of the sword fight come from Tajomaru and the woodcutter; the former wants to seem a brave and noble fighter and the latter wants the knife he stole to be irrelevant to the death.

The husband and wife both claim death by dagger but the husband says he “heard someone crying” and has returned from the astral plane to protect her from her act. Only the semi-crazed woman and the cinematic account point to the ultimate truth: in her moment of shame and hopelessness, she killed her husband and then couldn’t live with the consequences, instead shooting Tajomaru with arrows after trying to drown herself. But she still has enough self-preservation to allege she can’t remember. My explanation takes into account the motives for lying in the emotional subtext of all the players. The bounty hunter had no motive to lie and when he says Tajomaru fell from his horse, he ignored the reason for the bandit to be shot with arrows. Both the pre-execution Tajomaru and the post-execution husband feel love and devotion to the wife and don’t want her to suffer the consequences of her momentary madness to which they feel complicit, so they lie to protect her. The wife also lies by omission to protect herself.

So there you have it! It only took 59 years and three viewings but I believe this is the best fit interpretation for the wonderfully perplexing story. I used to think it was just an allegory for the subjectivity of human experience but for the intuitive mind, perhaps there is an answer to the factual aspects although the lies the characters tell themselves are unassailable.

Perhaps the exosome treatments that I did intranasally have rewired my mind to process things differently and arguably more efficiently. I feel as though this interpretation is the result of efficient quantum reasoning (multiple meanings considered) along with consideration of the emotional, narrative, and cinematic clues.

These days, with the case of Jeffrey Epstein in the news and speculation as to who is lying, I assume that everyone has something to hide. I simply apply the same principles of seeing what their emotional truths and self-interests consist of, which facts repeat in multiple accounts, and the truth starts to emerge in the negative space of all the lies.