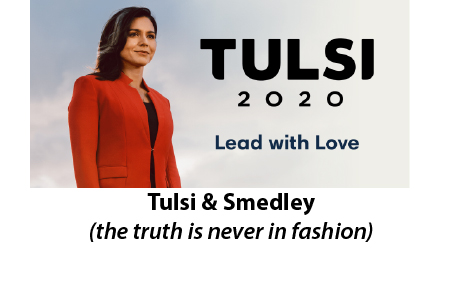 On Feb 2nd, Tulsi Gabbard, Iraq War vet and congresswoman from Hawaii, launched her campaign with an unusual vision: to end America's wars of regime change
2 Responses
Reading Time: 3 minutes
Is Tusli Gabbard on the wrong side of history?

This week, Vermont Senator Bernie Sanders renewed his quest for the presidency. On Feb 2nd, Tulsi Gabbard, Iraq War vet and congresswoman from Hawaii, launched her campaign with an unusual vision: to end America’s wars of regime change.

Although this syncopated political platform has raised concern on both the neoliberal and neocon sides which are very much in sync with wars of intervention, the Wikileaks tweet reminded me of just how many ideas, like Gabbards, lie on the dustbin of history, along with a once famous General Smedley Butler.

For those who have never heard of Smedley Butler, he wrote a tell all book about his 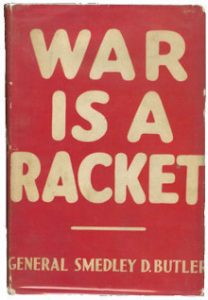 34-year career in the Marines called War is Racket in which he alleged that his experience in the Philippines, China, in Central America and the Caribbean during the Banana Wars, and France in World War I amounted to proxy wars for bankers and American corporations.

Further buried in the rubble of history is the Congressional testimony Butler gave about how American businessmen in 1933, via proxies, tried to get him to raise a fascist army, stage false flag events, and begin a coup d’etat over Franklin Rosevelt on behalf of this cabal.

I was at a conference when I met a young lady who was a self-proclaimed think tank policy expert on Middle East terrorism. I asked her what she thought about Gabbard’s proposed legislation called the “Stop Arming Terrorists Act” or H.R. 608 introduced on 1/23/2017. She didn’t even know anything about it, much to my disappointment.

Gabbard alleges, along with many whistleblowers, independent journalists, and consumers of independent media, that our nation, via proxies, is funding the groups seeking to topple Assad, destabilize Yemen, and foment violent discord.

Again, history does not acknowledge that her premise is even valid despite the evidence to the contrary. Even the purported humanitarian White Helmets, whose movie about their efforts won a Best Documentary Academy Award, are alleged to be agents of foreign intelligence by this Canadian journalist:

If we examine the rise of American/corporate influence that has existed from the time of the Butler, through the Cold War, and into the present day meddling in Gabon in January and in Venezuela currently.

If you do in investigation into almost every war, they are almost all triggered by what people call “false flag” events and subsequent propaganda. These staged attacks roil the populace, trigger fear, and galvanize support for endeavors in which the instigators rarely put their own selves or sons in danger but result in devastation to generations of humans.

History is largely a glorification of horrible men and how they defeated other horrible men, in what year, and for what manufactured reason. If the gears of credit, fear, war, conflict, rebuilding, and recrimination were to have a shoe thrown into them, perhaps it will be in the form of this congresswoman from Hawaii. Or perhaps she will be cast upon the dustbin of history because an anti-war message is deemed obtuse by deep state operatives. Time will tell. If you want to see what kind of Idiocrats they are recruiting for “journalism” these days, watch comedian Jimmy Dore skewer a NYT reporter for denouncing Gabbard an “Assad toady” despite not knowing the definition or even how to spell the word! (caution: there is a lot of profanity used by these comedians).

My prediction is Bernie/Gabbard lose in 2020 but Gabbard/Ocasio-Cortez triumph in 2024.  Gabbard famously resigned as Vice-Chair of the DNC over how they were treating Sanders.  What a Smedley Butler-esque thing it is to stand on principle….This is not my desire per se…I have problems with a lot of the rhetoric of Ocasio-Cortez and her rather thinly wrought policy edicts based on ideology. I just think the two-term pendulum tends to swing that way and America is enthralled with identity politics (AOC) but also hungry for politicians with a moral compass (Gabbard).

In the meantime, let us all pause and reflect on just how much sympathy we should have for the deep state advocates of perpetual warfare like General Petraeus, who unlike Smedley Butler, cashed in big time with teaching appointments at Harvard and becoming a wealthy mucky muck at investment firm KKR.

2 thoughts on “Is Tusli Gabbard on the wrong side of history?”