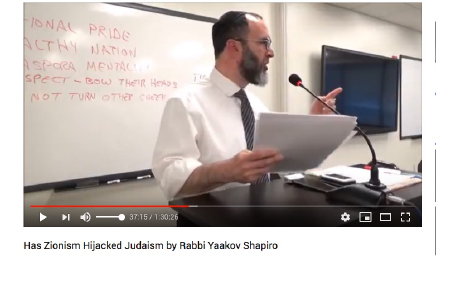 "Zionism is not response to antisemitism but rather a response to Judaism; it was a movement to normalize the Jews. The Zionists wanted to be like the antisemites."
No Responses
Reading Time: 2 minutes
Is Zionism antisemitic?

We are a species that tells stories and as we construct meaning, we are often swept up in the story to the detriment of truth and logic.

A recurring theme in storytelling is the one of victimhood generally and Jewish persecution, specifically. While I am no expert in this area, it seems as though an Orthodox rabbi and historian, Yaakov Shapiro, might be. This video will certainly open your eyes about the emergence of Zionism and is well worth the viewing. Rabbi Shapiro is funny, wise, and enlightening. In short, he personifies the best aspects of my own experience of studying four years at the Beth Israel Hospital in Boston and living amongst the wonderful Jewish people.

Rabbi Shapiro makes a very clear case. The Oxford and Cambridge dictionaries differ. One says a Jew is someone who practices Judaism; the other defines it in cultural or ethnic terms. Shapiro says that only the former definition is valid as there are many ethnicities that practice Judaism and you can convert to Judaism. Ask Rachel Doloziel if you can convert to an ethnicity (as she identified as an African-American and was ridiculed.)

You would have trouble defending  a notion of  “secular Christianity” or “cultural Hinduism” yet the pseudoscientific colonial/racial template of ethnic based nationalism that powers Zionism was the multilateral aspiration to power to become the very thing that they despised.

Nowadays, a BDS (boycott, sanction, divest) movement is attempting to influence the Israeli state. People of conscious, including practicing and cultural Jews, are not content with the current practices of the state but does that make them Agents provocateures or patriots? What is strange is that there is legislation in the congress, supported by Cory Booker, to make it a crime to criticize Israel.

None of this is to say there is anything inherently wrong with Judaism anymore than there is anything wrong with being a Buddhist or Muslim. But a system of Zionism that subjugates its own people and now seeks to infringe upon the sovereign rights as Americans should raise an eyebrow.

I close with the Rabbi’s quoting of scripture:

“Who is strong? One who conquers himself. Who is honored? He who honors others. Who is wealthy? He who is happy with what he has.”

Shapiro argues that Zionism emerges from self-loathing of atheist Jews. He states  that “Zionism is not response to antisemitism but rather a response to Judaism; it was a movement to normalize the Jews. The Zionists wanted to be like the antisemites.”

I strongly urge you watch the video above. To say that Zionism has always been antisemitic is not sophistry or cognitive dissonance; in fact, Rabbi Shapiro convincingly makes the case that it is the clearest way to understand how we got to this point in history.