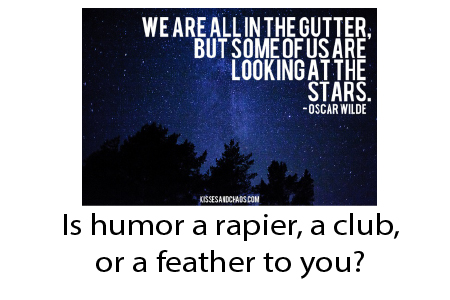 Because I am an active listener and don't take controversial positions unless I really know you well, people tend to tell off-color jokes around me.
3 Responses
Reading Time: 4 minutes
Jokes about politics, religion, race, and sex

In the Meyers-Briggs framework, I am decidedly a perceptive, not judgmental person. Because I am an active listener and don’t take controversial positions unless I really know you well, people tend to tell off-color jokes around me.

It is fascinating that the things that people shouldn’t but often do joke about, such as sexuality, gender roles, racial stereotypes, religion, and politics are often quite shocking- not because they offend, but because they unmask the banality and utter lameness of the person telling them.

I had a fascinating experience attending a professional improv comedy show with my two sons that really constituted a 90-minute session of complaining about Trump. Even my 14 and 18yo kids could recognize that it constituted mostly of cringe-worthy name calling and virtue signalling to an audience that they believed was ‘all in’ on their jokes. There were some some pretty hateful comments like “monster”, “sexual assaulter”, and “Nazi”. Even worse, it just wasn’t clever but was indistinguishable from the editorial rants of CNN reporters and late night talk show hosts.

On the other hand, when I am with other more politically “right wing” friends, they joke about traditionally “disadvantaged” groups. Again, I defend your right to make an ass out of yourself but being unfunny I will not abide.

The problem with humor is the audience and what they consider to be normative beliefs. It is HARD to be funny and when you offend, you might not ever be told. That is why it is best not to discuss, let alone joke about such deeply held beliefs such as religion, politics, and identity.

What is the core problem with dull humor? It often comes from an un-illuminated mind as a way of “othering” an idea or group they find threatening. Today, I was listening to a lecture on Emmanuel Kant who defined enlightenment as man’s emergence from his self-imposed immaturity. Immaturity is the inability to use one’s understanding without guidance from another.

At dinner this evening, I was listening to the conversation among recent college grads about how outrageous such things as lack of diversity, gentrification, gender-norming, disadvantaging, and even the meta-political significance of wearing gloves while shopping in a thrift shop.

When I listen to this emergent fascist left wing, I recognize little of the substance of liberalism that I once knew- compassion, economic justice, and freedom of speech. Instead, the liberals who are so strident are best represented by one of the comics at the improv show who said unironically “We aren’t going to change and they aren’t going to change and I like it that way.”

Clearly, these are not people who are willing or able to go through the Kubler-Ross stages and are still stuck on denial, anger, and depression when it comes to the election of Trump and what they feel is a resurgence of straight, white, monotheistic patriarchy. Sadly and to the detriment of their goals, they will further alienate the vestigial remnants of their party if they abandon the working poor in favor of fighting some spurious culture war with lines drawn up at a level even above and beyond the level of political party and journalism that media professor and feminist author, Camille Paglia, recently identified as the problem.  Paglia recently recently blamed democrats for ruining journalism which seems a very myopic interpretation of the backlash against “fake news”.

If and when it becomes okay to ignore truth, embrace criminality and treason, and shout down those who disagree with your laundry list of un-examined beliefs, then you can safely consider yourself a partisan and not a patriot. The means are more important than the ends so it is not okay to kill your enemies. What’s more, your intent, as Kant suggested in his examination of duty or Deontological ethics, is the most crucial of all. If you are trying to get to the truth and defend liberty, then we can work out the details of the facts, science, and significance of your beliefs later.

Politically, if you are trying to do the right thing, in the right way, then you are okay with me despite what your political, religious, or identity affiliations might be. If you are trying to be funny, in a clever way, without malice, then I may even laugh at your joke which simultaneously offends some part of me.

But if you are just trying to treat the world like a Newtonian-thermodynamic toddler’s sandbox, then I feel sorry for you. You must finally concede that we can both be wrong, right, ignorant, bigoted, and unfunny. But sadly, I find that the immature mind doesn’t perceive truth to be a scalar quality like love, beauty, or heat. The unenlightened mind says if you are a liar, then I am more truthful. If you are to blame, then I am faultless. If your tribe commits a sin, then I have been absolved of one.

The non-binary system of consciousness is coming as I blogged about. Truth is scalar and the more consciousness we have, the more empathy and justice we will have. Unfortunately, the current political climate and regression into tribalism has made the routine of “pretending to be asleep” the prime modus operendi for most people.

I hope we can reach the Kubler-Ross acceptance stage sooner rather than later and that people can feel the pleasure of enlightenment soon. I hope that soon, we will all feel safe to use reason without approval from our self-soothing affinity groups. I don’t care if your actor is from my tribe or not; if they commit an unconstitutional act like conducting a war without congressional approval, they are not acting in the best interests of my republic.