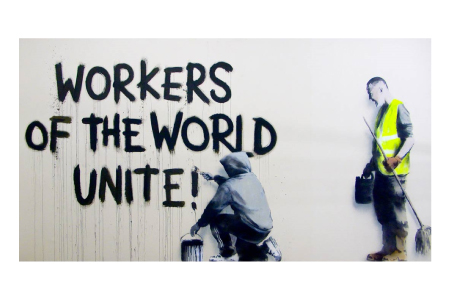 So what is the meaning of labor day? It is the end of summer, a castrated celebration of the worker's right to have dignity despite the de facto acquiescence to the power to corporate feudal lords. It is also a reminder that the worker's of the world will never dare to unite because inside each one of them is a latent fear of some Stalinist, atheistic, progressive agenda that would threaten the myth of free market, trickle down natural order.
No Responses
Reading Time: 4 minutes
Labor Day – What does it mean?

While traveling in the former Eastern block states that languished under communism and the Soviet empire, the lessons of history are palpable.  In Lithuania,  the site of the statue of Lenin (now at the bottom of the Baltic Sea), was replaced by a ship of flowers. Here are the docks where Lech Walesa and the striking Solidarity workers set the first domino in motion to bring down the Soviet control of Eastern Europe in 1989. And the remnants of the Berlin Wall now constitute an art gallery: I find this anti-Japanese sentiment a bit poignant although I’m not sure what it is meant to suggest. Perhaps the loose translation of “sons of bitches, stop lying, we didn’t learn anything” is meant to be a rebuke of Japan’s recent revocation of its pacifist constitution established after WW2?

When the tour guide quipped about everyone being equal under communism but some were “more equal”, I realized that I was remiss in my education and had never actually read George Orwell’s Animal Farm; so I did so on the plane home.

George Orwell said everything he wrote was to oppose totalitarianism and when I read Animal Farm, that was apparent.

If you want a vision of the future, imagine a boot stamping on a human face – forever.

In the rise of utopian thought and anti-capitalism sentiment than accompanied industrialization, the Haymarket Riots occured in Chicago in May of 1884 and the subsequent show trial and execution of activists led to martyrs for the 8-hour work day that could not be celebrated in May. So the celebration of labor is in September.

What is apparent from the cauldron of history that is the 20th century is that some form of capitalism is more competitive than state-run communism probably because the fruits of ones labors are not readily apparent to the self, the family, and tribal unit in the latter system.

What is also apparent from the last few decades of history is that corporations and powerful individuals will naturally act in their own interests and result in greater income disparity.

One can argue that if people were allowed to own free electricity, shelter, water, and the means to produce food, that this would represent a utopia. But without a populace based on credit, wage slavery, materialism and consumerism, the engine of western nation states would grind to a deflationary halt and would be left the Native Americans in the Pre-Columbian era without the might and the will to repel aggression.

In the final analysis, any lesser anarcho-utopian civilization like Denmark could be easily destroyed by aggressive imperialist neighbors so the best and only hope is for such an enlightened culture to emerge organically from within a military superpower such as the United States, which has the media control, hardware, and lack of political checks on waging war that we enjoy as the result of the group dream we call American exceptionalism.

Luckily, we have a constitution and voting rights to reshape our republic in any way we see fit.

So what is the meaning of labor day?  It is the end of summer, a castrated celebration of the worker’s right to have dignity despite the de facto acquiescence to the power to corporate feudal lords. It is also a reminder that the worker’s of the world will never dare to unite because inside each one of them is a latent fear of some Stalinist, atheistic, progressive agenda that would threaten the myth of free market, trickle down natural order. So in the end, George Orwell gets the last word in the final scene of his Soviet morality play, Animal Farm. The pigs, who once led the animal revolution against man, the presumed capitalists, completed their transformation.

“Twelve voices were shouting in anger, and they were all alike. No question, now, what had happened to the faces of the pigs. The creatures outside looked from pig to man, and from man to pig, and from pig to man again; but already it was impossible to say which was which.”
― George Orwell, Animal Farm