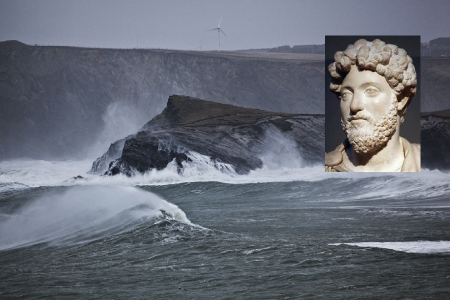 I believe one of the greatest benefits for people from taking these adaptogens is a spiritual housecleaning
No Responses
Reading Time: 3 minutes
Marcus Aurelius reminds us what do dwell upon before sleep

When I went to the library to return some books today, there were boxes of books that someone had left outside. I found Marcus Aurelius’ “Meditations” and in it, a very nice quote which sums up the need to have a good attitude.

Be like the promontory against which the waves continually break, it stands firm and tames the fury of the water around.

I am reminded of this often when patients call me complaining about anxiety or nightmares while taking TA-65 or RECHARGE.  Your subconscious problems will usually work themselves out in the most favorable way but it can be painful facing the monsters from your id if you have an falsely externalized locus of control. What I mean to say is that if you are the kind of person who can’t be right unless someone else is wrong, then you may have internalized a narcissistic world view in which all negative things are “done” to you rather than being the byproduct of your own choices.  Your suffering appears to be a set of circumstances that are like demons torturing you when if fact, like the epiphany in the movie, Jacob’s Ladder, if your soul were properly aligned, they would be angels trying to liberate you.

As Jung said, “He who looks outside, dreams. He who looks inside, awakens.”  For many people with a world view in which they can only be the authors of goodness and control and where other people bring evil and chaos, the subconscious conflicts that present in the dream state appear like an action movie where you are being chased.  But as one of my patients explained to me, “gradually, I became the hero of my dreams and started taking back control.”

I believe one of the greatest benefits for people from taking these adaptogens is a spiritual housecleaning.  But for some people, the neurosis and ego-driven drama of the life matrix of meaning that they have constructed is so addicting, that they cannot make it through the first week of enhanced dreaming and flow.  They choose instead to feed their delusions of victim-hood and reject the subconscious self and the desire for peace and honesty.

The Marcus Aurelius quote reminds us that we are only in control of our reactions to things and that this is what makes us human, noble, and perhaps even divine.  In any case, it is advisable to practice gratitude and abundance before sleep or your will program your dreams and your psyche for fear and scarcity.

WATCH this video that I did on dreams to understand more…