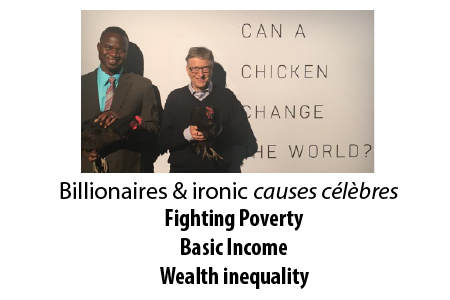 Our real world is quickly becoming "Bizarro Pottersville" as the most entitled and wealthy men on the planet calling for income redistribution.
No Responses
Reading Time: 3 minutes
Now Mr. Potter would rather be loved than feared

Remember how in Frank Capra’s classic movie, It’s a Wonderful Life, we despised old man Potter because in a world where George Bailey never existed, he created a dystopian alternative Bedford Falls by capitalizing (pun intended) on fear of bank failure, low income tenements, and peddling to vices? Guess which world we actually live in?

Our real world is quickly becoming “Bizarro Pottersville” as the most entitled and wealthy men on the planet are calling for income redistribution. To borrow and invert the line from The Godfather, they would rather be loved than feared, perhaps because certain breakout sessions at Davos and Bilderberg has disabused them of ethos of Genghis Khan:

“A man’s greatest pleasure is to defeat his enemies, to drive them before him, to take from them that which they possessed, to see those whom they cherished in tears, to ride their horses, and to hold their wives and daughters in his arms.”

First, we have Bill Gates leading the war of poverty despite making us all a little poorer by having forced upgrades on faulty operating systems lo these many years.

Next, we have the Pope, leader of one of the richest institutions on the planet, saying that unbridled capitalism is terrorism against humanity: 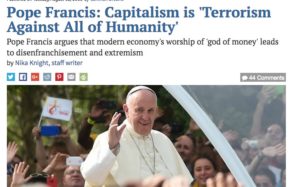 And the final straw that broke the proverbial camel’s back (so it could fit through the eye of a needle, no doubt) came today when Mark Zuckerberg, the $50-Billion dollar man who disputed the Winklevoss Twin’s notion of a “work-for-hire”, spoke at Harvard’s Commencement and advocated basic minimum income. He said “there is something wrong then I can make billions of dollars when millions of students can’t afford to pay off their loans.” That is some chutzpah on par with the old 70s shampoo commercial “Don’t hate me because I’m beautiful!” 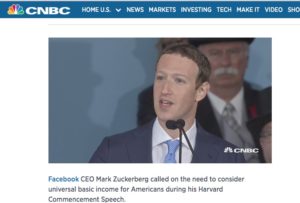 So what is going on here? Well I blogged about it over a year ago pointing comparing basic income to bus vouchers and free chips that casinos hand out. BMI or GBI is no charity offering; it’s a tacit acknowledgment that we are living in a post-capitalist world. The efficiency with which wealth has been concentrated in the hands of the few is only accelerating with 62 people owning as much as half the population of the world. And the rich can only get richer with deregulation, efficient automation, capital flow, and sheltering.

So basic income is needed to keep the economies from having to be re-imagined. We have a few who have leveraged the fear, desire, and competitive advantage and won everything. So unless mass genocide or a Bill Gates-style tax on robot workers is enacted, there won’t be any economic engine that has regular folks contributing to it. The engines of consumerism, renting, owning, working, taxing, insuring, and recycling bad movies will all come grinding to a halt.

So now the “Mr. Potters” of the world have realized that if they hadn’t been so darn good at what they sought out to do, maybe the poor schlubs of Pottersville wouldn’t have been driven to desperation, suicide in its many forms, and worshiping two Harvard drop outs that got rich off of our inability to use Macs or resist compulsively checking in on old’s friends and lovers.

For more insight into the metaphorical dragons and Mr. Potters who now want to take care of the little guys, read this blog about Sydney Greenstreet.

Oh and by the way, there is a very easy way to fix everything: develop all the survival utilities as basic human rights and then make everyone a global citizen with a block chain BMI/GBI and votes.  I outlined my plan to transition from non-cooperative states and actors to a inevitable world peace and stability in a recent blog. It doesn’t discourage capitalism or enforce economic equality like communism; it simply takes the pressure off surviving and let’s us all thrive.