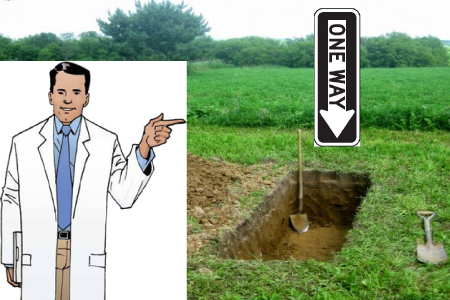 I do not follow a lot of conventional medical practices for myself. Medicine in very invasive now. I am 59 yo and in good health. I do not take any prescribed meds. I try to stay away from MDs as much as I can. Of course, I had to go when I had the bleeding - just to be sure.
1 Responses
Reading Time: 3 minutes
Ovulation after menopause? – RN declines to explain to her MD

If your hair turns dark from grey, doctors are skeptical but they aren’t alarmist. You see, the fundamental dogma of medical doctors is that things will always get worse with time. It’s our religion. But, if you bleed post-menopausally, the clinician will be bugging you to rule out cancer of the uterine body. You are probably headed for some minimally-invasive procedure like and endometrial biopsy, dilation and curettage or sonohysterogram.

This is appropriate because uterine cancer is serious, presents early, and is curable but the consequences of ignoring are grave.

I am not telling you to ignore it, but how can you tell whether it’s something to be worried about?

Ovulation is characterized by a period which starts heavy and is proceeded by moliminal symptoms such as cramps, food cravings, mood swings, and breast tenderness.  Bleeding not preceded by those symptoms that starts light and becomes heavy is more concerning because it is not due to ovulation.

I received this email from a long-standing patient documenting her encounter with the medical system.  Because she had already read my book and watched my video explaining this phenomenon of “finding an extra gallon of gas in the trunk”,  she wasn’t concerned but interestingly, didn’t bother sharing that info her doctor.

I stopped having periods completely when I turned 57 (rather late in life, I think)

I have not had one since.

I am not really upset about it.  It shows that TA65 works. [n.b. her opinion; not an FDA-approved statement]

Yes, it was just like a regular period with breast tenderness, cramps and food cravings.

Dr. did a vag sonogram that day in the office.  I cannot have an office bx because I have never delivered and have a very stenotic cervix.  So, she did a hysteroscopy and D&C under sedation in the OR.  (Excellent anesthesia).  When I saw her in the office postoperatively, I did not look at the bx report myself.  She said that there was only normal cells – nothing abnormal.  I had endocervical and endometrial curettings I often hear about patient reticence with cases of improved blood pressure, denser mammograms, lower cholesterol, etc… Patients don’t want to be seen as nuts and don’t have the patience to explain something to a medical doctor whose mind cannot grasp the idea of getting younger and healthier.

Here is our email exchange on the subject:

That’s great Bonnie
This is not common, but it happens!
Just like the extra gas in the tank
Did you even try to explain it to your obgyn?
They would probably read you the riot act

I am definitely “in the closet” on that subject.
I do not follow a lot of conventional medical practices for myself.  Medicine in very invasive now.  I am 59 yo and in good health.  I do not take any prescribed meds.  I try to stay away from MDs as much as I can.  Of course, I had to go when I had the bleeding – just to be sure.  I have seen so much in my years in the OR.  Some day, and it cannot be soon enough, physicians will be taught to do more than order tests and medication.  I cannot wait for that day.  Oh well, so much for my soapbox.  I never thought I would be writing those words to an MD!  No offense.  My entire employment hx has been as a nurse and contributing to the conventional approach.