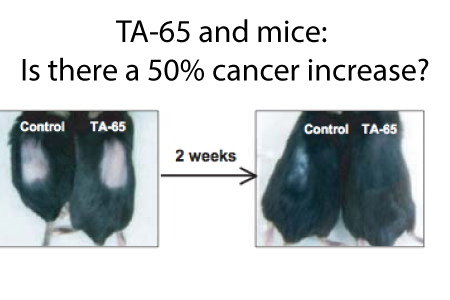 For those wanting a more in-depth understanding of how TA-65 might work, I refer to you an email conversation I had with a patient, who was concerned that a blog referenced a Blasco paper demonstrating a 50% increase in liver cancer in mice after taking TA-65.  I will share some thoughts but suffice it to say that mice are different because they die mainly from oxidative stress, not telomere erosion, as discussed in this recent video interview with expert, Dr. Sandy Chang, of Yale University.
The paper that the blog referenced can be found here  http://owndoc.com/pdf/Blasco-TA-65mice-study.pdf
It is a very good piece of science in which they engineered mice to have one copy and zero copies of the TERC or telomerase ‘key’ needed to run the telomerase engine.
The study shows that without a functioning key, no benefit was obtained from receiving TA-65 and that the effect was dose-dependent and transitory unless given over a prolonged period.
In mice taking an adequate amount of TA-65, telomeres lengthened and the critically-shortened percentage dropped, consistent with lengthening and/or apoptosis of those ends.  See this Effros paper for more information showing that HIV-infected T-cell populations change after being given a telomerase activator,
Biomarkers of aging appeared to improve. Glucose tolerance in the younger mice improved: And bone mineral density improved in the older mice: Of note, we see that there was no statistically-significant increase in cancers: The person who blogged about liver cancer was basing it not on the entirety of the findings (see figures A,B and C) but rather on the difference between control incidence of ~40% to 60% in figure D.

Note that 40% of the mice have liver cancer without taking anything (the control group). This is a normal feature of mice aging and that is because mice are very different because of their susceptibility to ROS damage.  Further, a “p value” of 0.34 suggests that the difference between 40 and 60% seen the this study has only a 66% chance of being real (1-p=% of true association vs random chance).  As you may know from studying scientific literature, we typically require a p value of 0.05 (or a 95% chance of non-random association) to declare a statistically-significant finding.

Note that the survival of the mice didn’t increase from taking TA-65.  Again, mice are inbred for having long telomeres and are susceptible to tumorigenesis and morbidity from oxidative damage, unlike humans who have a scalable capacity for anti-oxidation.