Tonight, I was reintroduced to something that my 13-yo showed me but this time, it stuck: THE MANDELA EFFECT.
2 Responses
Reading Time: 5 minutes
The Mandela Effect: We are all delusional

Tonight, I was reintroduced to something that my 13-yo showed me but this time, it stuck: THE MANDELA EFFECT.

This so-called effect is exemplified by the fact that many people recall Nelson Mandela dying in prison, in the late 80s or early 90s whereas others recall him dying in 2013 after having served as president. I remember that version of reality and I can cite the blog I did about it as proof.

When I was shown the examples of things I and others misremembered, I explained them away as a fun internet fad. But when my friend asked me if Jim Nabors was still alive, I replied incorrectly; I thought he had died a couple of years ago.

I remember thinking about how I’d get to Sri Lanka if I ever visited India; now it appears I misread the map as Sri Lanka is apparently not off the Southwest but rather the Southeast coast of India.

Without getting too into it, here are some other things that I and many others misremembered in precisely the same ways:

The Star Wars robot, C3PO has always had a silver lower leg, corroborated by actor Anthony Daniels but not photographer John Jay. 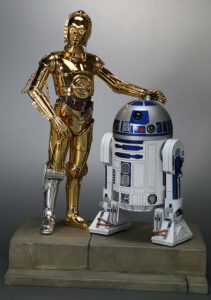 Think you know Star Wars? Apparently Darth Vader actor, James Earl Jones, is a victim of the Mandela Effect as he swears his line was “Luke, I am your father”. The actual line is “No, I am your father“.

Field of Dreams quote: “If you build it, HE will come”. In all the versions available, there is no “THEY will come”.

The movie confusion even extends to titles. Remember Interview with a Vampire? Nope. Never was such a movie. It is being misremembered. The real title is Interview with THE Vampire.

And the villain Jaws from Moonraker? When he met his love, she smiled without braces although you may remember it differently.  You won’t find versions of the movie where she has braces but there are allusions to it.

Remember actress Sally Fields’ Oscar speech? No you don’t. Her name is Sally Field and she said “You like me! Right now, you like me” not whatever it is you misremember involving the word “really”.

But the confusion doesn’t just apply to these movies. Some people remember a land mass to the west of Australia which appears in the globe in Dazed and Confused.

Remember the Evil Queen’s line in Snow White:”Magic mirror, on the wall”...wait that’s not what you recall?

Sex in the City was actually Sex AND the City.

Eli Whitney, inventor of the cotton ‘gin was a white guy, not a slave, as possibly misremembered by some.

Even our earliest childhood memories are faulty:

Mr. Roger’s Neighborhood’s theme song was actually “It’s a beautiful day in THIS neighborhood” (not THE neighborhood)

The Monopoly game guy never had a monocle!

Curious George never had a tail.

And how many of us grew up reading the Bible?  It admittedly has been revised a lot, but the current version may surprise you. Did you recall that Jesus was killed by hanging from a tree, not a crucifix?  In most versions of “the Lord’s Prayer”T the word “debtors” appears rather than “trespassers” and the King James Bible now describes Jesus coming to Jerusalem during Easter, not Passover. Oh and the wolf now lies with the lamb; there is no mention of the lion and the lamb at all.

Here are some common brands that you probably misremember as well: 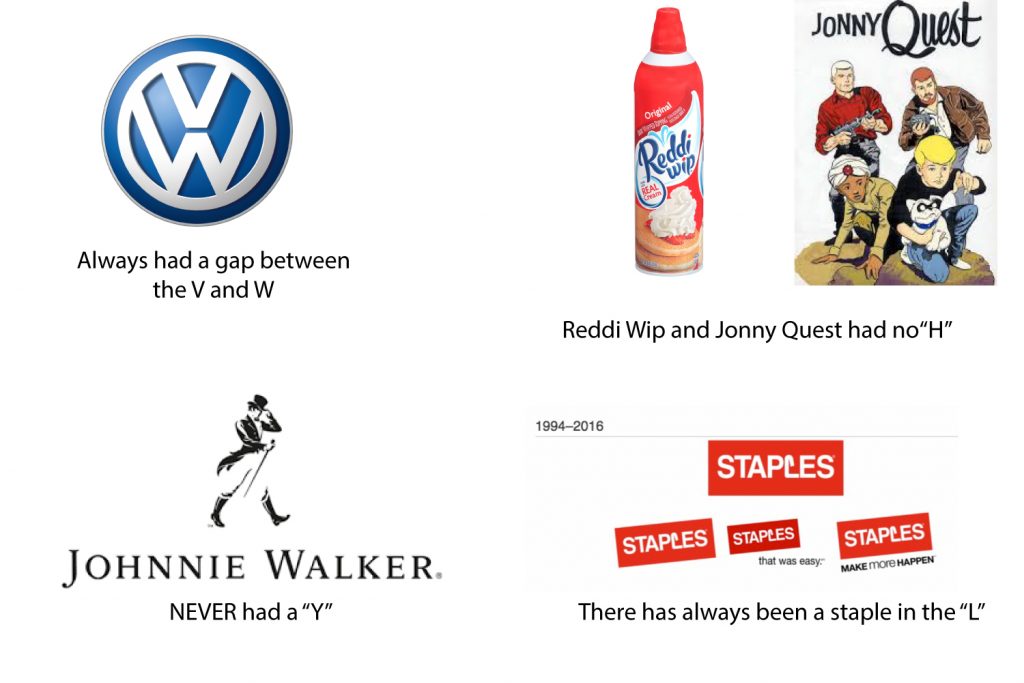 What are the best explanations for the so-called Mandela Effect?

In my estimation they are the following, not mutually exclusive, but presented in decreasing order of likelihood.

HUMAN ERROR -(99%) Misremembering and group think. We have collective consciousness and there are so many reiterations of the wrong memories that they stick

DECEPTION – (<1%) Disinformation and mind games by tricksters like the person that “published” this image from a 1990 book about the 1991 death of Nelson Mandela.

We are being trained to not believe our own memories. Multiple contradictory versions of evidence that coexist in this reality point to this possibility.

PARALLEL UNIVERSES (<0.01%) CERN’s Large Hadron Collider messed with the barriers between parallel universes. This could be a hoax but is suggested by this shot from the Pharrel Williams’ video, Happy, showing British Theoretical physicist with cards deciphered “Bond #1 (aka Barry NELSON)” and “Mandela”. 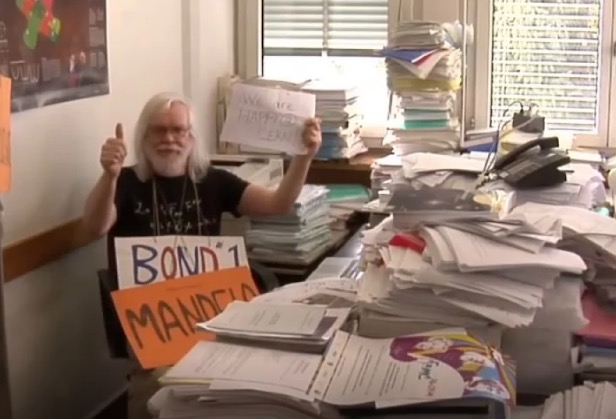 HOLODECK (<0.001%) We are in a glitchy simulation that is being hacked or poorly maintained a la Elon Musk’s recent rant.

RAPTURE/ASCENSION/DESCENT (<0.0001%) Some of us were transported from an alternative Earth and reality. Check out this Christian Aussie astronomer’s argument that we are 80,000 light years across the galaxy now.

COSMIC CONSCIOUSNESS SHIFT (<0.00001%)  Some of us are able to access multiple dimensions via altered consciousness.

Why is it that so many of us share the same wrong specific memories? We are probably delusional by shared erroneous recollection. A delusion is fixed false belief and in truth, all events are subjectively, communally, agreed upon as I blogged about here in the difference between facts and truth.

Remember Star Trek‘s transporters? No one ever misremembered things after transportation. If there was some transfer of our old selves to a new world, the resolution must be solid state to the quantum scale because memories are preserved beyond the resolution of the duplicate simulation/reality/latest backup.

It is interesting that one of the most popular novelists, Dan Brown, wrote about CERN in Angels and Demons, the power of collective consciousness to alter reality in The Lost Symbol, and is interested in esoteric science.

If you prefer to disbelieve any old versions of reality held in your own solid state memory, it is understandable. The traitor in The Matrix preferred to update and conform to false reality too.

If you want to know what it feels like to be in a parallel universe fighting to maintain your old identity amidst reprogramming, watch this episode of Fringe where our Earth agent Olivia is convinced by mind control and false memories that she is alt-Earth Olivia.

I guess I’ll leave you with what we can all remember as the Looney Tunes (not Looney TOONS) character, Bugs Bunny’s tagline: “That’s all, folks!” (assuming I’m not misremembering it)…

p.s. I don’t want to make any value judgements but things seemed more noble and clever how I recall them. If we did get transported, that implies we didn’t ascend, but rather descended. Ugh. But maybe it was to help this world write better dialogue to catch up to the home world  ;-P

2 thoughts on “The Mandela Effect: We are all delusional”