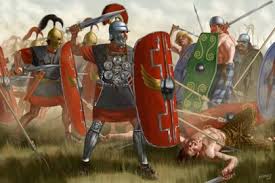 I don't care if the Broncos or the Panther's win and neither do 100,000,000+ Americans watching the game. But do you know what they care even LESS about? That's right, the TPP
No Responses
Reading Time: 2 minutes
The plebs enjoy Bread and Circuses, while the despised Goths fight to preserve the glory of empire It would seem that people care more about football than politics or governance.  There has been something called the Trans Pacific Partnership that was just approved and yet still needs to be ratified by congress. You might want to find out about this.  Negotiations and details are secretive but for some reason, the implications are really angering a lot of people outside the US.

In Germany, a rally against TPP found over 250,000 people taking to the streets to protest it. Some say the TPP is some kind of conspiracy of corporations and power brokers to decrease friction to profit and increase leverage. I don’t know. I just know that this rhymes with another time of history.

In the Late Roman Empire, in the Greek city of Thessaoniki, there was a favorite charioteer that was accused of being ‘involved’ with the Roman Gothic garrison general’s lover; the punishment was imprisonment during the biggest race of the year.  That would have been like putting Cam Newton in jail for sleeping with Roger Goodell’s wife.  The people of Thessalonki didn’t like it so they slaughtered the Goth-speaking Roman army soldiers.

To assert his authority, Emperor Theodosius promised a reconciliation game and then invited citizens to an ambush whereupon about 7,000 were slaughtered.

Emperor Theodosius was excommunicated by the Bishop of Milan for this unchristian act and instead of defying the clerics, the Emperor agreed to the Theodosian decrees, outlawing all non-orthodox religions. This was the end of paganism and the start of he largest Jewish diaspora that no one knows of (out of Alexandria).

Read about the end game of the Catholic Church when it has been exiled out of occupied Rome and was able to pull the greatest ‘hail Mary’ in history in my Houston Film Festival Award-winning screenplay.  At this time, Goths were fighting to keep the order of the Empire and usurpers with a new universal (Catholic) plan for world domination simply outmaneuvered them.

I don’t care if the Broncos or the Panther’s win and neither do 100,000,000+ Americans watching the game.  But do you know what they care even LESS about?  That’s right, the TPP and who gets to decide the laws concerning free trade, copyrights, price collusion, and the preservation of the status quo under a system of nations ruled by their own sovereign laws.

If you think it better to light a candle then to curse the darkness, read this website about the TPP.

If you don’t care that the TPP then you probably won’t care that the US Attorney General in September of 2015 signed us up for a global network of interlinked cities with a unified, private security force called the Strong Cities Network.