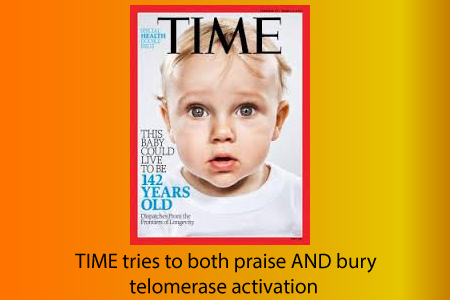 I was asked by my patient, Robert, to comment what 2009 Nobel laureate Elizabeth Blackburn said in last week’s TIME magazine article about longevity. One of the articles was penned by Jeffrey Kluger, who quotes Blackburn:

“Cancers love telomerase, and a number of cancers up-regulate it like crazy. But some cancers are also related to low telomerase because that makes telomeres less stable. We don’t know how to strike some kind of balance. My feeling would be that if I take anything that would push my telomerase up, I’m playing with fire.”

Between the sentence ending with “stable” and the one beginning with “We”, the author inserts this comment, not indicating whether it is his opinion of that of Blackburn:

“Trying to boost telomerase through supplements is a very dangerous game to play- at least given the current state of medical knowledge.”

In the preceding paragraph, the author states these unsourced views:

“Telomerase supplements, however- either synthetically produced or in the many herbal supplements that claim to include the enzyme-are not the answer. If telomeres never burn down, you get immortal cells-which is another way of saying cancer cells”

Now then, there really is too much (or too little) here to comment on.  Working backwards, the last quote incorrectly states that supplements claim to include telomerase when I don’t know of any that make that claim. Telomerase is a large enzyme that would be destroyed by proteases in the digestive enzymes and so would not be bioavailable orally.  The statement about telomeres never burning down causing immortal cells is not a truism and in fact, mice cells die of oxidative stress with long telomeres.  And it is quite incorrect to call them cancer cells because cancer cells typically exhibit other features such as loss of contact inhibition and failure of apoptotic pathways, not just enhanced replicative capacity.

In the preceding paragraph, the author states trying to boost telomerase through supplements is a very dangerous game, but that is after citing literature indicating that lengthening telomeres by behavioral interventions is desirable and possible.  He does not explore the literature indicating safety and efficacy of telomerase activation in mice from the Blasco study nor the DePinho study, nor does he know that TA-65 received the GRAS (generally recognized as safe) designation from an expert panel using FDA guidelines.

Dr. Blackburn’s comments are what she has been saying for the last seven years; and for seven years, tens of thousands of normal people have safely ingested TA-65, including yours truly.  I don’t know if cancers have the capacity to feel ‘love’ but we know Dr. Blackburn has a fear of fire.  Other than that, she completely ignores that the system is capable of self-regulation. Recognized expertise and a smattering of tangents does not trump the real world experience of my patients in my opinion.  And it is also a bit incongruous that she has published articles attempting to induce increased telomerase activity by lifestyle modification as way of attaining better health and slowing aging, yet she doesn’t feel those interventions would represent “playing with fire”.

In my clinical experience, chronic ingestion of the telomerase activating TA-65 does not irreversibly and continually lengthen telomeres nor appear to increase cancer incidence.  Therefore, it must be simply enhancing telomerase activity in stem cells already capable and appropriately able to use it.

All in all, the article presents a case for telomere erosion and telomerase activity being causally related to aging. But it offers blanket and unfounded condemnation of telomerase activation through supplements in the interests of some unknown author agenda and prejudice.