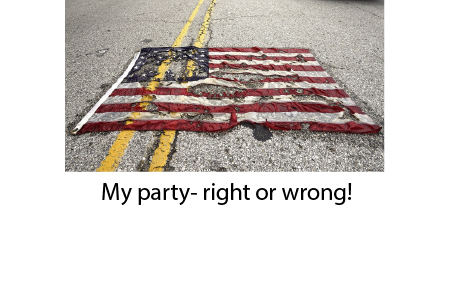 If the system must be safeguarded from the voters, perhaps the system is in conflict with the very notion of democracy?
1 Responses
Reading Time: 3 minutes
Trigger Warning: Old scab being picked (2016 Dem primaries)

Last week, I received my California Ballot in the mail and it triggered a rather unpleasant memory for me.

The reason I was “triggered” is that my polling place is now back to the same place it always was- the local Temple. But for the 2016 presidential primary, as an independent voter in an open primary, I was sent to some dude’s garage and given a stub for a provisional ballot with no receipt number. According to this article,  this was a common occurrence which may have led to shredding and a change in the outcome. Now, maybe that doesn’t matter because you feel the right candidate emerged but it begs the question of why so many of my left-leaning friends are gas lighting themselves.

As I understand the mainstream, core Democratic position, it goes like this: It was Hillary’s turn to be president and the super-delegate system is a safeguard against populist (and popular) grassroots candidates. Because the leadership of the party knows what’s best, they should be allowed to determine who is elected, not the voters. Because of the threat of a radical usurper, it was critical that exit polls not be conducted and slow counting or perhaps even destruction of provisional ballots from independents, who really shouldn’t vote in the Democratic open primary, be done.

In summary, the threat is so great from the uninformed left and the fascist right that there was a manifest need to cut corners, disenfranchise naive “Bernie Bros” and independent voters, and blame foreign agents for hacking the election. Notably, no one bothers to deny the authenticity of the leaked emails or the tell-all book by DNC chairperson, Donna Brazile; we are looking at the finger, the not moon it points to. If you doubt the veracity of DNC “fraud” (i.e. preselecting candidates who have purchased the party and then appropriating funds), watch this video explaining that the DNC primary system “designed to soak the public for money disguised as legitimate voting process.”

They say that the first casualty of war is the truth and no matter what side you are on, the truth of voter disenfranchisement is real. I only want to ask: if the system must be safeguarded from the voters, perhaps the system is in conflict with the very notion of democracy?

I leave you with an old blog about narcissists and empaths and ask you to consider whether you truly believe in voting or you just want ratification of your anointed leadership to continue? Gone are the days when candidates even deign to make empty promises. Now that the unaligned and disillusioned center grows, it is clear that the two-party system is starting to collapse as more voters just stay home rather than show up to cast “lesser of two evil” votes. I recommend reading this NYT article about African-Americn voters in Milwaukee, if you think this is hyperbole.

Owing to some cultural, spiritual, and chemical poisoning, our learned helplessness, cynicism, tribalism, and delusional thinking is on the rise in some but waning in most. I feel the vast majority of dwindling party loyalists are truly engaged in self-gaslighting. What are we fighting for and against if not a system of representational democracy?  If you think it right and proper that the two-party system continue to manage our country without the input of the electorate, then you are sleepwalking backwards through history to the King George III days of taxation without representation.

Unless we rehabilitate the system to allow accountability to the electorate, we risk drifting towards throwing out the Constitution and starting over. The stakes are high. Maybe you earnestly believe that US Constitution was a quaint system of checks and balances and inalienable rights that was never meant to be taken literally? Perhaps the mistrust of government inherent in the document was merely artistic flourish and not suitable for the existential threats of the new left or the new right? If you believe that, then you may be one of the domestic enemies of the Constitution now but you may still end up being on the winning side of history. Pick a side: is it my party right or wrong, or my Constitution, right or wrong?

That didn’t happen. – all the votes were counted in each state despite what conspiracy theorists claim

And if it did, it wasn’t that bad. – maybe some were lost but it wouldn’t have made a difference

And if it was, that’s not a big deal.– the stakes were so high that we couldn’t elect a radical like Sanders

And if it is, that’s not my fault.- Russians were involved to stir up discontentment (by allowing people to learn the truth)

And if it was, I didn’t mean it. – We only wanted to give you what you needed

And if I did…You deserved it. – You never cared before…so why should we bother to listen to the voters?