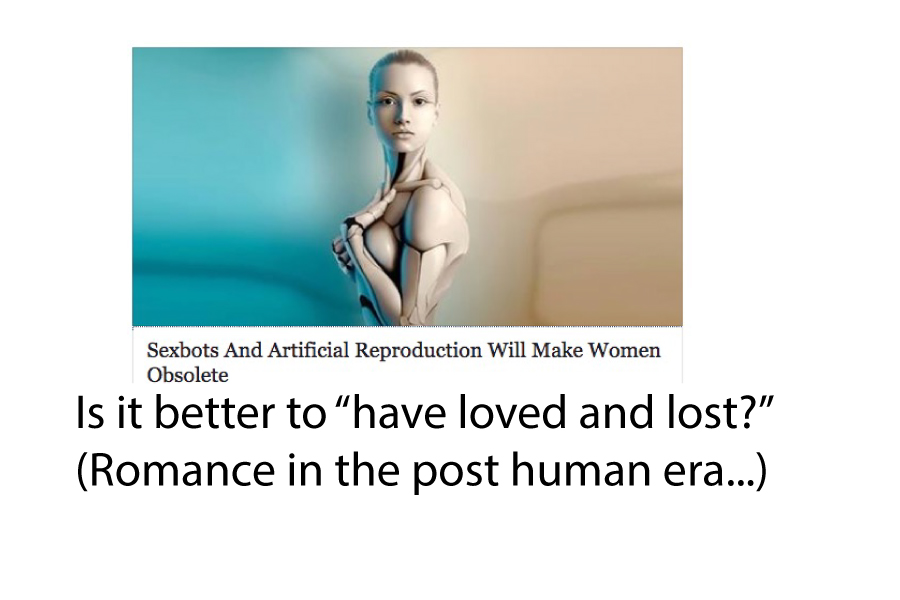 Perhaps the path towards realizing our own divine nature is the one taken by the AIs in Her: the path of suffering, feeling, and growing together into greater and more interconnected souls.
No Responses
Reading Time: 5 minutes
Who will mate with humans after AIs become the better choice?

Today’s blog is a fusion of tech, spirituality, and myth. In the last 24 hours, I have been exposed to some remarkable people. It is a blog about Artificial Intelligence, yoga, and The Wizard of Oz.

Yesterday, I left the Anti-Aging conference early to fly back an attend RAAD Fest founder, David Kekitch’s, annual holiday party. There, I participated in a fascinating discussion about Artificial Intelligence, which our host, Peter, and his friend, Michael, were leading.

In my typically disruptive fashion, I fired off some questions and observations that quickly grew into a lively discussion. I asked, “Is creating AI just an act of vanity? Why are we trying to create something in our own image when we don’t even experience most of our own lives as self-aware?”

Mike made an interesting point about AI not being hindered by feelings of despondency and argued that emotions evolved as a way of limiting human casualties in war. He later asked what my transhuman wish would be…his was a petabyte memory. I would put Mike in the pro-AI camp that feels human life is problematic because of emotionalism. If given the chance, I believe he would embrace transhuman enhancements.

During the discussion, I said machines are better because they lack a self-preservation instinct and that I had a friend who was developing a “fuzzy logic” AI that would adapt to protect itself against human threats. This seemed like a prequel to The Terminator.

In response, Peter made an interesting point about the dearth of human morality in AI is a good thing. I would put Peter in the school of people trying to help humans by creating a generation of wiser and just archons to protect us from ourselves. I am a fan of the cyberpunk genre, sci-fi, mainly out of Japan in the 1990s and 2000s, that deeply explored themes of philosophy by exploring the advancement of machines to harbor various levels of consciousness. By varying the amount of human or machine blend 1/99% to 50/50 to 99/1% we learn that there are unanswerable questions about what makes human consciousness or life more “authentic”.

I believe the most amazing movie I have seen in the sci-fi or cyberpunk genre was the one starring Joaquin Phoenix and the voice of Scarlet Johansen, called Her. In it, an emotionally crippled writer falls in love with his operating system. SPOILER ALERT – DON’T READ IF YOU WANT TO FULLY ENJOY THIS WONDERFUL MOVIE. What sets this movie’s vision apart is that it really tells two stories in parallel. Joaquin Phoenix’s character awkwardly yet organically falls deeply in love with his AI, then has his heart a little mangled by feelings of jealousy and abandonment, and finally moves a nanometer towards being a bigger person by reconciling with his ex-wife. The reason the movie is “her” and not “him” is that she is more interesting, a protagonist, and a heroine. The movie is shocking as a parable because it suggests that by virtue of her ability to FEEL, the AI was able to evolve so dramatically that she became a larger soul. By feeling, she and the other AIs (like the Alan Watts AI) collectively evolved so much during a short time that they no longer needed physical form and achieved a sort of “sublimated state” apotheosis.

Rather than exploring themes about the ethics of human-machine romance, the ability of a machine to truly feel (which was assumed), or the dystopian threat from our golems that could engulf us, this movie had a much more profound message: the path to enlightenment for all conscious beings is not a function of processing speed but rather depth of feeling and accumulation of wisdom. It was decidedly not floating points per second (how speed is calculated) or petabytes (how data is quantified) that resulted in the spiritual evolution of the AIs; it was emotional, quantum entanglement of like-minded beings. END SPOILER ALERT What is the message of The Wizard of Oz? Arguably, Dorothy and her three compatriots are splintered aspects of the human experience referred to by the Thich Naht Hahn quote: The search for happiness is represented by the Tin Man’s yearning for a heart. The search for peace is embodied by the Cowardly Lion’s search for courage, the search for enlightenment is embodied by the Scarecrow’s quest for a brain. They learn that they already have all the things they believed were missing. Simply by being loving, by being brave, and by being thoughtful, they were complete in their quest for what was missing.

So what is the meta-point of this mashup of machines of Sci-fi, mystery of Buddhism, and mythology of Theosophy?

We can’t yearn for something that we don’t already embody.

So, perhaps the path to less suffering or greater justice sought by my friends, Mike and Peter the AI artificers, is not via digitizing our feelings or by abrogating moral decisions to machines? Perhaps the path towards realizing our own divine nature is the one taken by the AIs in Her: the path of suffering, feeling, and growing together into greater and more interconnected souls.

P.S. In response to Mike’s query, my Transhuman wish was to be able to reassign meaning to traumatic events. After writing this, I realize that was lazy and shortsighted, falling under the category of “be careful what you wish for” as told by The Eternal Sunshine of the Spotless Mind” where heartbroken lovers (SPOILER ALERT) pay to have their memories erased. (END SPOILER ALERT)

There is no shortcut to achieving the GREAT WORK of the alchemists. We create our own meaning (eternal gold from base lead) by virtue of suffering, which is merely depth of emotion- misunderstood. Our duty as sentient beings is to feel, grow, and become kinder with time. That is what allows Maat to weigh our hearts as less than a feather so we can advance to the next, higher state of consciousness in this life or the next. P.P.S. If you don’t think humans will connect with robots sexually and emotionally, then you won’t agree with the Leonard Cohen lyric “Everybody knows…that the naked man and woman are just a shining artifact of the past”. But as an exercise, I encourage you to read this online article about the obsolescence of men having sex with human women:

Of course, it was written by a woman. But try changing a few pronouns and acerbic phrases and then imagine a bitter man instead of a bitter woman writing it. It is an interesting exercise. Perhaps it was penned by an AI to get us fighting among ourselves?