2 Responses
Reading Time: 3 minutes
Why humor is so subversive

With the recent violence around killings purportedly related to satire of the Muslim faith and culture in the satirical paper, Charlie Hebdo, 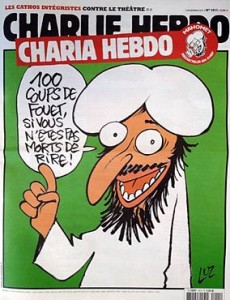 I thought we should examine the history of satire and realize that things have been way too serious as the result of the destruction of one particular work called Aristotle’s Comedics.  Humor was deemed so subversive, that no one has admitted to reading this work since the fall of the Library of Alexandria, which heralded the death of Hellenic Civilization and the end of Late Antiquity.

Socrates was a wise-guy. They say he was compelled to kill himself for pederasty, but in truth, it was probably his irreverence for authority that got him killed.

His student, Plato, was a real fascist who wrote The Republic and fantasized about a world of philosopher-kings in which humor was outlawed.

2,400 years ago, Aristotle enjoyed watching the annual theater competitions in Athens. He wrote two books about them: Poetics, which is still studied by authors and storytellers today, and Comedics.

The former is still a masterpiece on why things are dramatic; the later was lost/destroyed/hidden long ago.

Long ago, Classical, Hellenic civilization had a pretty enlightened flow of ideas by virtue of the books.  Aristotle’s work on what makes things funny was lost, although perhaps copies still exist in the vaults of the Vatican or some Caliphate.

Initially, the Library of Alexandria was ransacked by Christian monks in 391CE.  I describe the events of this pivotal era in my Houston Film Festival Award-winning screenplay, “Nike’s Last Stand”.  The remaining books were moved to the temple of Serapis, the pagan god of Alexandria, which was then ransacked in 412CE (also found in my screenplay which culminates with the death of Hypatia the philosopher. After those fateful events, it took almost 15 centuries until someone dared publish political satire in Western Europe, proving that it is not only Muslim Fundamentalists who fear ridicule.

It is said that the Muslim conquest of the city which occurred in 642AD signaled the final burning of books but this is probably apocryphal (a term which derives from the Greek for hidden away, as in the non-Canonical works of the Christian faith before Helena and Constantine formed the first Canon at the Council of Nicea.  I say the stories that Muslims burned pages to fuel baths may be politically-contrived because most of classical civilization would not even have survived had it not been for its faithful stewardship by the Islamic world through Europe’s Medieval times.

I think the most wonderful movie about the suppression of humor was Umberto Eco’s adapted “The Name of the Rose”.  In it, a series of murders at a monastery brings the inquisitor, played by F. Murray Abraham, who then evokes a supernatural explanation for the series of killings. (SPOILER ALTERT!! -skip to end of spoiler alert)  In truth, the real reason involved a monk who used his access to one of the extant copies of Aristotle’s Comedics to curry sexual favors from acolytes and then murders them to hide his guilt.  (END SPOILER ALERT) 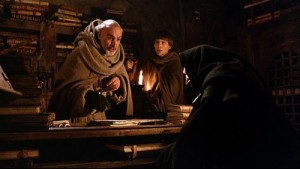 So in this time of satire, realize that a strong society is one that allows ridicule of authority and freedom of expression.  But let us also realize that a stronger society is one that does not allow itself to be manipulated into denying human rights and dignity in some knee-jerk reaction and misguided generalization to the actions of deranged individuals, whether they be foreign or domestic.   Muslim communities are outraged at these killings and the actions of a few shouldn’t divide us like like the murder of police officers did with New York Mayer de Blasio and the NYPD.

Let us all pray for peace and live in the knowledge that when we are awake and living with compassion, these hatemongers will never control us.

2 thoughts on “Why humor is so subversive”