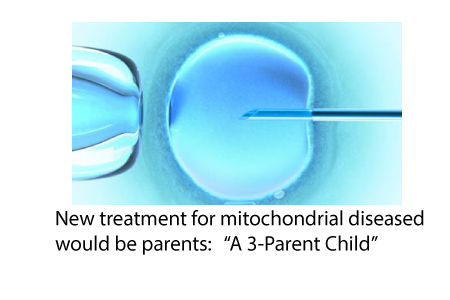 In truth, what the team did was a bit like having a surrogate mother carry an infant to term but on the scale of a fertilized egg. This is a historic first and promises new hope for a class of people with maternally-inherited mitochondrial diseases. I’ll explain.

The Jordanian couple were hindered by a maternal disease in her mitochondria so they sought out the NY specialist who opted to perform the embryo manipulation in Mexico due to absent embryo ethics constraints.

Since the cell mitochondria come from the unaffected, donor mother’s egg, they simply swapped the nuclei; they removed the nucleus from a healthy donor egg and transferred in the nucleus from an mitochondrially-defective mother. The father’s sperm then fertilized the five eggs into embryos and one of them was born April, 2016 as an apparently healthy boy.

Interestingly, there were some straggler mitochondria (about 5% of the original diseased type) that presumably stuck to the outside of mom’s transplanted nucleus. The baby now shows only 1.6% diseased mitochondria.

As explained in the article, Jacques Cohen, a specialist who amusingly casts a bit of shade on the technique of this team, had already invented a workaround consisting of mitochondrial transfer and produced 17 babies before the US banned such procedures in 2002.

This technique differs from Cohen’s technique because instead of swapping mitochondria, it did the simpler method of just swapping pre-fertilization nuclei and keeping the rest of the donor machinery and parts intact.

Is this the moral equivalent of refurbishing a defective computer with a brand new motherboard? Or is it the start of a whole new class of human genetic engineering for competitive advantage? If you could hijack an egg from an Olympic athlete, then what would stop a 90-year old woman from doing so and paying a surrogate to carry her wunderkind to term?

The answer is that barring any extensive genomic or epigenetic problems in the 90-yo woman, she would be faced with several options. She would have had to have had the foresight to freeze a haploid (23 chromosome) oocytes decades before and now find an “eggcellent” sperm donor if she wishes to replicate the technique being reported. Secondly, she could have had the foresight to freeze embryos decades ago and transfer a

diploid nucleus (already combined with sperm’s 23 chromosomes). Finally, she could just clone herself and transfer her own nucleus into the healthy egg.

To understand more about female fertility and its decline, watch this podcast that I did: