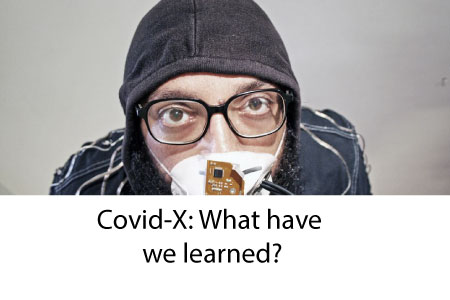 Whether this is novel (as in new) or novel (as in a dramatic story), is a subject of a debate that only a handful of scientists can reasonably speculate on based on forensic genomics
9 Responses
Reading Time: 6 minutes
COVID-X: Experts wrong again

There is a saying in screenwriting by William Goldman (Butch Cassidy and the Sundance Kid, All the President’s Men, The Princess Bride):

“Nobody knows anything…… Not one person in the entire motion picture field knows for a certainty what’s going to work. Every time out it’s a guess and, if you’re lucky, an educated one.”  ― William Goldman, Adventures in the Screen Trade

Or if you prefer…

“ I’ve never seen a model of the diseases that I’ve dealt with where the worst case actually came out. They always overshoot,” – Dr. Anthony Fauci, CDC

In the last six weeks of Covid-19, we have lived through an unprecedented reality that clearly demonstrates how easy it is control the narrative and peoples’ lives through fear of the unknown. Perhaps leaders acted out of an overabundance of caution or a dearth of skepticism but the ability to keep the story going is starting to fade as people get restless, lives are shattered, and the doomsday modelers revise their numbers of deaths downward and more asymptomatic cases show up in the denominators.

With the benefit of hindsight, here are the things are relatively confident of:

Whether this is novel (as in new) or novel (as in a dramatic story), is a subject of a debate that only a handful of scientists can reasonably speculate on based on forensic genomics. Whether natural, engineered, or both, the “newness” of the this CoV comes down to the proteins coded for and how exactly they got there. The ability to “edit” RNA like Crisper Cas9 for DNA has existed in the last few years but suffice it to say that it is harder than you might imagine to “play god”.  If you wanted to invent a computer virus and you would probably start by cutting and pasting code (i.e. proteins) from other virus programs because it is hard improve on what works.

It is important to realize that you need live animal cells to make viruses. It is not a toxin that you can coax bacteria to make or a bacteria that can grow by itself. Like exosomes, virions are produced by the endocytic pathways that package multivesicular endosomes. That’s why they’re the same size; you can’t just mix them up in a test tube or make them without using a host cell’s machinery.  That is perhaps why the CDC donated $3.7M dollars to the Wuhan Institute of Viroloogy- to make and keep samples for study from the host animals.

As for being more deadly, the real world has not produced the kinds of mortality rates or total numbers that modelers predicted and now they shamelessly revise their projections down. When they said the curve was flattened, they were right, but the area under the curve may be similar and now the WHO even praises Sweden for declining total lockdown. Again, Coronavirus infections are very contagious, usually mild or asymptomatic, and will always be endemic to human populations. That is not to say they aren’t deadly to some and in fact, many of the annual deaths from pneumonia and flu-like illnesses might have begun as Covids in years past but we never tested for them because the medical bias was that they are mild, self-limited cold viruses except in rare cases and compromised hosts (still a valid frame, I might add).

Humans have all been exposed to coronaviruses as they comprise about 20% of the common colds that we experience. Immunity is partial and may require re-exposure and an immune competent host, as with any other infection. There should be cross reactivity between coronaviruses that we have faced before because the surface proteins “look” similar to the immune system. Just because you retest positive for the RNA, that doesn’t mean you have another infection; it could be old viral RNA released from previously infected cells. Just because you are vaccinated, that doesn’t mean you won’t need to be exposed again to mount an adequate immune response and that you will be protected. Antibodies don’t sit around and wait for one threat; they keep a memory bank for future, faster production when the threat reemerges. As with the body, the human communities can’t sit around and wait for one threat and they must continue to function and yes, herd immunity, given 99% survival, is a real concept.

In most places around, hospitals are being closed and staff are being furloughed. If you believe that other diseases can be detected and mitigated by medical care, then this is bad news for people delaying diagnosis and treatment for those other conditions. Their curves are going to be raised by limited access to medical care. One of my uncles had a stroke two weeks ago in Los Angeles. He was intubated, his family was not allowed to visit him at all, he had a heart attack, and he passed after twelve days. The administrators said his test came back as negative for coronavirus but they were going to add that to the death certificate anyway. That practice of capturing CARES act Covid-19 money for hospitals is allowed for using “clinical suspicion” but in the case of an 80-year-old with hypertension that has a stroke, this may be a practice that was revisited by the CDC statisticians who recently removed tens of thousands from the official death counts who died “with” and perhaps not “from” Covid-19. The refusal to allow visitors to comfort and monitor health care as well as in the inability to mourn the deceased are unprecedented steps that I find troublesome to say the least.

If you think that a vaccine is a prerequisite to normality, I would caution you. I am not saying they won’t work and there have been canine CoV vaccines for twenty years. But the truth is that vaccination requires an immune competent host, stability of the viral surface antigens, and re-exposure to ramp up the anamnestic production of the specific antibodies. As with those boomer kids who remember “chicken pox parties”, the natural host immunity creates a more robust lifelong catalog of useful antibodies that may protect better than an engineered one.

So what is the take home message? I maintain everything that I said in the previous seven blogs still holds true unless and until whistle-blowers come forward to add more insights. The extent to which this story has been politicized and weaponized despite low mortality and high levels of asymptomatic spread is an experiment in human nature akin to the Milgram experiments where students were happy to shock someone, even to death as long as authority figures that they trusted told them to do so. Most people lacked autonomy; most accepted agency, or the idea that they could trust authorities.

Rather than think about recrimination and how easily we were misled, let’s focus on what we want going forward: universal health care not tied to employment, clean water and disease prevention for all humans on earth, and access to information, housing, food, and sovereign rights for all.

If you want location tracking, censorship, forced vaccination, and implantable medical records accessed by surveillance corporations, I suggest you reconsider where that leads. One place is the control of your behavior explained by this article on a Microsoft invention that essentially rewards cryptocurrency for physical acts of compliance.

The bottom line is the models and mortality rates were wrong, this IS a common cold virus that is highly contagious and usually asymptomatic, and the curve is not ever going to be a flat line because coronoviruses have been with us forever and we as individuals and societies can and always will fight them with immunity and ingenuity. We have a lot bigger problems than this in many areas so it is time to move past the fear and understand that trading our society and freedoms is not a good bargain. Be kind to all, more autonomous in your thinking, and focus on increasing abundance for all people.

To read the previous seven blogs in this Covid-19 series, see below. I would love to hear your feedback.