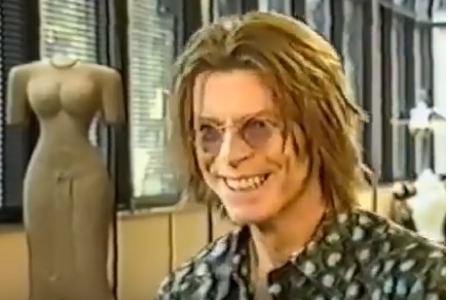 I think we all know the lyrics of “Rebel, Rebel” but just in case, this stanza seems to sum up the great rebel himself:

You’ve got your mother in a whirl ’cause she’s
Not sure if you’re a boy or a girl
Hey babe, your hair’s alright
Hey babe, let’s stay out tonight
You like me, and I like it all

I think what we discover time and again in the chameleon of David Bowie is a phenomenal artistry but also an abiding rebellion against fixed gender, appearance, and sexual preferences.  Perhaps we admire the man because he reflected of own hidden desires to reinvent ourselves (as beautifully expressed by Simon Critchley’s book about him) Bowie reveled and rebelled in sex, drugs, and rock and roll because he was a libertine, narcissist, and artist.  I would hesitate to call him a role model for anything except rebellion and the evidence is clear that he lived a life of excess throughout the 70s from swinging London, to NY, to LA, to Berlin.

His musical genius is unquestioned. But for someone to declare himself gay, then bi, then a ‘closet heterosexual’ speaks to the fact that he found self identification and a static identity to be a bore and just another thing to be rebelled against.

He was famous for saying some pro-Hitler comments and then later blamed cocaine-induced psychosis for those remarks.

For someone who could adapt so easily in appearance, demeanor, and musical styles, we got the sense that he was a perpetual Alice in Wonderland and that at no time did he wish to ever just be one type of artist or return back through the looking glass where one distinguished man gazed back.  He even declined knighthood unlike Sirs Elton John, Paul McCartney, and Mick Jagger.

If you don’t believe my interpretation of the man as a rebel without a fixed moral compass, listen to him describe his motivations for becoming a rock star in his very own words from this year 2000 interview.

It reveals a man of high intellect, deep intuition, and perhaps suggests that he had a nuanced sense of humor and/or a truly extraterrestrial origin.  His comment on the future of humanity now that it was wired to the internet alone is worth your time:

INTERVIEWER: [the internet is] just a tool though, isn’t it?

Please don’t be offended by this blog. I love the music and artistry of David Bowie and I am placing no negative valence on a libertine lifestyle of sex, drugs, and rock and roll. I am simply pointing out that he was a performer and not a willing patron saint of freaks or LBGT causes any more than Bob Dylan was the willing Woodie Guthrie of his generation.  They are artists and just when you want to put them in a box, they go electric, or change genders on you.