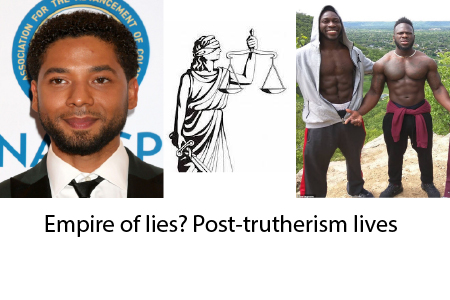 Choose to tell the truth and to not harm others because as Jussie Smollett is learning, karma may come back to bite you unless you are too big to fail/jail.
No Responses
Reading Time: 5 minutes
Disillusionment is good for all of us

In a new series, I want to rehabilitate words; our first is disillusionment. Next will be anarchy and political correctness. Although this word carries negative connotations, in fact, disillusionment should be wonderful and the goal of enlightened beings.

When we struggle with illusion, we suffer. To see the world as it is also to suffer but it comes down to the moment when the turncoat from the movie The Matrix plugged back into a lie so he could live in the illusion instead of struggle with reality.

In 2016, the Oxford dictionaries selected “post-truth” as the word of the year partially in response to the media reporting on Brexit and the 2016 American presidential election.

The ruling elite at Bilderberg put “post-truth” as one of their agenda items in 2018 although I don’t know the context of the discussion.

These days there is a lot of lying. I suppose there always has been but with the internet, it is easy to discover facts and awaken collectively if we choose to.

It seems to me that there is a hierarchy of lies:

So what are we to do about a post-trutherism ethos? What are we to do when emotions trump facts? Certainly with the advent of the 24-hour news cycle. social media, and vitriolic tribalism, many people have decided that the ends justify the means and many lies get promoted to beliefs by a lack of discernment. This is the primrose path to the world depicted in Mike Judge’s dystopian satire, Idiocracy.

Happily, most people are still able to discern reality when it is presented if the mechanisms of information and culture are not jury-rigged. I blogged about how quickly the Korean president was disgraced and jailed in contrast to the characters who brought us Bay of Pigs, Iran-Contra, Abscam, Gulf Wars I and II, drone warfare, Fast and Furious, drug wars, countless false flag operations, and regime change in countless nations.

Actually, I believe we have always lived in exactly that kind of world and that we are only just now able to see it as we live in a brief window of time before the censorship of the internet. In my book, The Telomere Miracle, I explain how all of consciousness is based on emotional meta-tags. In this blog, I explain how after a plane crashed in a parking lot that I go to daily, I have the indelible impression that it is dangerous even, if it isn’t really.

As my blog about artificial intelligence discussed how important it is for people to function in the ambiguous spaces of multiple meanings and contexts so that they are not acting inappropriately.

So let us examine on the strange case of actor Jussie Smollett, which is a story that has quickly evolved over the last two weeks. If I choose to believe the victim here, this gay, Jewish actor on the TV series Empire was attacked at 2AM in the streets of Chicago by two masked men while he was on his phone with his manager. He says the men asked “hey, aren’t you that (derogatory term for black gay man) who is on Empire?  This is MAGA country”.They then beat him up, threw bleach on him, and put a rope around his neck.

Ignoring for a moment the possibility that racist homophobes who watch Empire may not be walking the streets with bleach and nooses in 20 degree below zero weather, we have to believe the victim, right? It is even more stunning that Mr. Smollett received an anonymous death threat letter a week earlier and declined personal security.

According to police review of surveillance footage, Smollett is seen with a Subway sandwich and a noose around his neck as he calmly ascended the elevator shortly after the attack. The manager and Smollett declined to turn over their phones to corroborate the “I hear the men shout ‘this is MAGA country'” timeline.

The two men walking near Smollett were identified by video and tracked by ride-share info. They are Nigerian brothers, one of whom was an extra on Empire and is the personal trainer of Smollett. They claim that Jussie paid them to stage the attack. There are also allegedly receipts for buying rope found in their apartment.

This is how the post-truth legerdemain works:

These days there is a lot of talk amongst thought leaders and their young minions about “privilege”. This is just a Communist era concept of self-criticism that expands from class to all other identifiers like gender, race, ability, appearance, etc… The argument is that those with the least privilege have the greatest “intersectionality” and therefore credibility.  I can certainly choose to believe Jussie for no particular reason other that that is his earned privilege from relative lack of privilege; that the absurdity of political correctness.

I just am entitled to believe him just because beliefs based on emotions and delusions are unassailable. If you want to see what inverted privilege looks like, read this blog about the hateful racist attacks on the Covington high school steps of the Lincoln Memorial that was spun in the exact opposite direction of the facts by the media. The “protected, non-hateful speech” is deemed that only by virtue of visible identifiers and conditional logic.

To be disillusioned should not mean you have to be demoralized. The the Hindu and Gnostic faiths along with most esoteric branches of religions such as Zen Buddhism and Sufism, the entire goal is break through the veils of delusions. We are all free to plug into the matrix and join the “contented class”. Or we can treat everyone with the equal justice and demand the burden of proof equally; content of character not color of skin, remember?

If you believe the story that Nigerian friends of Smollett were paid $3,500 to stage an attack is less credible than two undocumented masked MAGA supporters walking the streets of Chicago with bleach and noose at 2AM in twenty below weather, then that is your prerogative.

I can choose to believe Mr. Smollet but I no longer do so at this point. This doesn’t mean I have increased prejudice towards gays, black, actors, or Jews. But I do have increased skepticism for people who make vitriolic political attacks, with highly dubious specifics, in the hopes or garnering support.

Fear produces emotions and delusions, which are fixed, firm beliefs. This inevitably leads to suffering. Embrace that the world is complicated and that all people possess the potential to choose between good and evil. Choose to tell the truth and to not harm others because as Jussie Smollett is learning, karma may come back to bite you unless you are too big to fail/jail.

Roger Stone got some facts wrong and his home was raided by the FBI with CNN filming the perp walk. He will likely go bankrupt and go to jail. In contrast, others ushered in regime change wars that kills millions. How very Les Miserables that the former may go to jail and become destitute whereas the others are honored with prizes and praise.