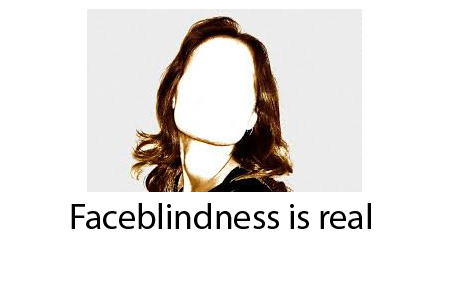 Our patient is a 48-yo woman who had normal facial recognition until her first pregnancy when she noted that she couldn't remember new faces
No Responses
Reading Time: 5 minutes
Face blindness reveals much about cognitive bias

The condition known as “face blindness” is called prosopagnosia from the Greek for face (prosopon) and not knowing (agnosia). I met a woman who told me she suffered from this condition and owing to the fact that my friend also has the condition, I knew a little about it. As humans, we need to understand that we are not the best species when it comes to many things such as running, swimming, echolocation, seeing outside our visual spectrum, etc…but there are four things we excel at: abstract thought, language, music appreciation, and facial recognition.

We don’t know if there is dolphin poetry but we do know that even the most tone deaf people can pick out a wrong note from a melody. What if you were like the estimated 2.5% of people with congenital “face blindness”?  Well, I met someone who acquired this disorder and through exosome therapy we attempted to ameliorate it. She believes that her condition has since improved but owing to concerns about FTC concerns, I cannot share the private video interviews unless you and I have some personal communications. Please email me at drpark@rechargebiomedical.com if you wish to learn about exosomes from MSCs and watch my video interview with her. I need your name, date of birth, a phone number to call you, and why you are interested, please.

Returning to prosopagnia, there can be different degrees and aspects for poor facial recognition. Organic mental disorders that affect memory and cognition can certainly contribute. We are speaking of the people who do well with memorizing everything except faces and lesions involving the fusiform gyrus (a specific area on the base of the brain) seem to be involved.

Our patient is a 48-yo woman who had normal facial recognition until her first pregnancy when she noted that she couldn’t remember new faces. Despite having an uneventful pregnancy with no neurological complications or hypertension, she has since suffered from 14 years of very poor facial recognition. For example, she states that she could be sitting and talking to you for two hours at a child’s baseball game and the next day, she wouldn’t recognize you. Frequently, people in her tight-knit community come up to her and she is a totally loss as to who they might be.

Most of us take for granted that when we sit down at a restaurant, despite not knowing the strangers around us, if they were switched with similarly dressed people with different faces, we would find it trivial to recognize the new people. Now imagine the stress associated with not remembering people that you should know, such as social acquaintances, parents of your children’s friends, and customers. Lisa has suffered many years of anxiety from other people judging her as aloof when they greeted her despite her having no recollection of their previous meetings. To add insult to injury, when she attempts to explain why, people don’t even think such as thing is real because they haven’t heard of it!

Now, you and I might have trouble remembering a name or a relationship, but I’d venture a guess that we probably don’t easily forget a face if it had some strong emotional meta tag associated with it.

I’m happy to report that according to Lisa, her life has improved since receiving exosomes since there is about a 30% improvement which has brought her to the point of not being nervous in social situations. Her husband is able to corroborate improved function. It was so satisfying to hear her delight of doing great at a back-to-school night at the local high school and that she aspires to be a “room mom” someday. I hope she continues to improve and whether placebo or organically based, that 30% improvement was enough to bring her back into a comfortably functioning adult role.

The reason I named this blog as I did was because I wanted to riff a little bit on cognitive bias. There is a Ray Charles song that roughly stated “if it wasn’t for bad luck, I would have no luck at all.” In my musings about artificial intelligence and culture wars, I realize that this also applies to cognitive bias. Consciousness is based on discernment which is based on categorization and judgement. Artificial intelligence makes errors because it has no biases (Type I false positive) or too many (Type II false negative). To learn more, read this blog.

The entire process of thinking, one could argue, serves to prevent you from having to be aware of all the sensory and imaginative things one could be aware of. In contradistinction, the successful use of depersonalizing entheogenic (making into god) hallucinogens in treating post traumatic stress and various mental disorders points to the degree to which altered self- awareness and decreased dependence upon our ego-laden traumas can exorcise certain harmful self-directed schemas of thought. Hallucinogens remove the ability of the mind to perceive itself as totally separate from reality. This leads us to understand the Ray Charles song: when functioning properly, the majority of our consciousness is also serving to keep us separate from the reality of our bodies, the environment, and our fellow humans. If it wasn’t for biased thought, we would have no thought at all!

The reason I am embracing bias as the kernel of truth to the human condition is that it seems to drive most of what we do. Rather than see each other as energy beings living in the eternal now, we label each other by sex, race, age, body type, attractiveness, speech, body language. We degenerate into identity politics based on those categories and fail to enjoy the miracle of each other.

Similarly, when I think of the aches and pains that I used to have before exosome treatments, I don’t fully remember that they ever existed. Instead of thinking back to months ago when I had years of the same aching Achilles, popping knee, or torn rotator cuff, I compare my current lack of pain to some time decades ago. That is my cognitive bias from a distorted self-image of health. I don’t actually perceive myself as recovered from an injury that was chronic and unremitting but rather, by default, think that the semi-permanent injury was the aberration and that I am “returning” to health. If I am being logical, I must consider the possibility that the exosomes helped me.

The case of Lisa also illustrates this cognitive bias. Her “new normal” is not a 30% improvement but rather a 70% degradation from what she enjoyed for the first 34 years of living. Despite there being no known cure for acquired prosopagnosia, she has experienced slight, subjective improvement.

As Americans in 2019, we live in one of the most just, prosperous, open, and free conditions in all of human history. There are places in the world where police state surveillance and human slavery (Libya and Mauritius) are a reality. Before we assume that the USA of 2019 will be the baseline of political health and personal liberty from which we ascend, let us consider that things can and usually do get worse as history struggles to rhyme. There is a value to having a cognitive bias towards protecting The Constitution, equal protection under the law, due process, and civil discourse. As politicians play their games and openly slander each other, it is up to us to insist on social norms and to realize that the ends do NOT justify the means; the means are what define the ends as survivors of Pol Pot’s utopian policies will tell you. If we abnegate the Bill of Rights to deter some fear of terrorism, hate speech, or a changing climate, then we scuttle the ship of state that has allowed for continuous health and prosperity of the body politic.

Postscript: To take a facial recognition test, go to https://www.testable.org/experiment/373/361870/start

I have excellent facial recognition skills and I only scored 81%. Lisa, three weeks after exosomes intranasally scored 77% which I thought was very good. Perhaps her 30% improvement was actually a 70% improvement?  I suppose what I’m saying is that all of us are pretty poor judges of our objective cognition because we adapt so quickly to the new normal and we perceive ourselves as being “whole” because we don’t really remember what that felt like to be dysfunctional. I’m just happy that she no longer has anxiety about meeting new people and coming off as rude for not remembering people whom she really ought to.

I have heard multiple times from patients after nasal exosomes that their thinking was clearer and future private exosome blogs will address the possible reasons for this and the effects that this regenerative therapy has on the hypothalamic pituitary axis of contro.