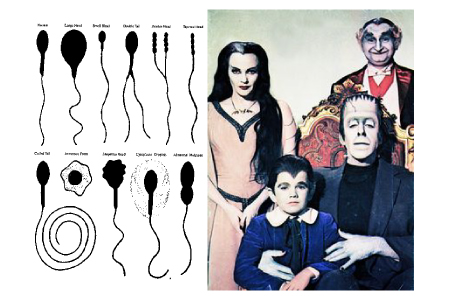 Sperm telomeres are supported by hyper-efficient telomerase activity and they are one of the only tissue types to get progressively LONGER telomeres with advancing age
No Responses
Reading Time: 2 minutes
Father’s Day Blog- Does dad’s age impact fertility and offspring?

We have long understood that maternal aging is critical and that the quality of eggs, reflected by the abnormal chromosome configurations of eggs, is an ongoing deterioration and depletion that begins in utero. You have the most and best eggs you will have when you are a 20wk fetus and it is all downhill from there. The changes that occur may be directly related to telomere erosion. The resumption of ovulation in post-menopausal women that I occasionally see in women who have used telomerase activators, is interesting. See this podcast for more info on Female Fertility and telomere biology.

So what is the contribution of male age upon fertility? Interestingly, telomerase is an important part of the reason men can reproduce into their 90s and confer longer telomeres to offspring. Another natural selection benefit of the male role is that if the sperm are bad, we presume they won’t swim to the egg and fertilize as efficiently.

Because of the high telomerase activity in the germ line, there would be lower mutation from telomere end erosion, end-to-end fusion, and non-dysjunction. But interestingly, even if you preserve the immortality of the germ line, that doesn’t mean other typographical errors, mutations, and epigenetic changes aren’t accumulating.

Sperm telomeres are supported by hyper-efficient telomerase activity and they are one of the only tissue types to get progressively LONGER telomeres with advancing age. In other words, the system is >100% efficient at lengthening. But that doesn’t mean the preserved data or genes between the telomeres is good. That is the paradox of hyperefficient telomerase activity; it isn’t the sole thing we need in place to engineer healthy immortality. We also need error correction, detection, and annihilation of damaged stem cells as I explain in this dummy’s guide to engineering immortality.

The data suggest that the male germ line is susceptible to age-related genetic deterioration, which is really just the existential risk of living. You have to copy cells, be exposed to mutagens, and therefore you accumulate errors. But there is also compelling epidemiological evidence that advanced paternal age is related to other multifactorial idiopathic conditions, such as autism.

Here is a nice review of the effects of paternal age on offspring.

What is the bottom line here?

Genetic integrity is always at risk and there has been drift from the moment you split from one cell to two. Both maternal and paternal age, as a proxy for the risk faithful DNA replication play roles in declining fecundity (ability to conceive) as well as aneuploidy (bad chromosome number), other mutations, and other disorders.

The optimal biological to have children is during young adulthood. Now that women can freeze eggs with reliable thawing, perhaps we need a pronatalist policy for young men and women to be able to bank their eggs and sperm at age 25. The only problem is ethics but if the state has a vested interest in supporting its tax base, then this may be humanity’s best chance once we all start living a long time with more and more mutations accumulating.