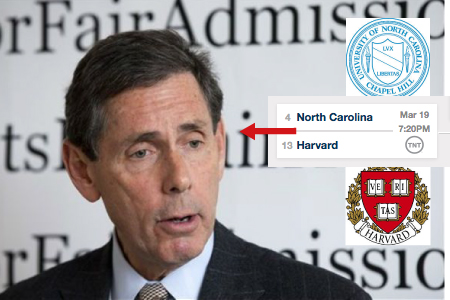 The SFFA sued both Harvard and UNC in November of 2014 for using race as an unfavorable consideration in the case of one Asian-American applicant test case.
1 Responses
Reading Time: 4 minutes
Harvard and UNC battle in the NCAA tourney- but stand together to defend race-based admissions

Tomorrow night, Harvard College will square up against the late Dean Smith’s UNC Tar Heels in the first round of the NCAA Basketball tournament that we dub “March Madness”, a yearly ritual of the 64 best teams in US collegiate basketball.

Coincidentally, these two schools are on the same side of a different battle that was waged by Edward Blum’s “Student’s for Fair Admissions”. The SFFA sued both Harvard and UNC in November of 2014 for using race as an unfavorable consideration in the case of one Asian-American applicant test case. The suit alleges, and almost no one would deny, that if race were not a consideration, that this and other Asian-Americans would have higher representation at elite colleges.

The effects of race-blinded admissions is shown in this article which states:

But based on Blum’s political pedigree, he is using the Asian-American applicant as a method of attacking affirmative action for ethnic groups currently underrepresented such as self-identified Blacks and Latinos. As a long-time interviewer and an Asian-American alum of Harvard, I have mixed feelings.  I recently interviewed an Asian-American applicant with perfect 2400 SAT, all 5’s on the hardest AP courses, and a 4.3 GPA at the of the most competitive schools in the nation, yet I would not place his odds very high of getting into Harvard despite exemplary extracurricular achievements.  And my sole explanation would be the requirement to check an ethnicity box on the application form.  If he was biracial with a European surname, he would be a shoo-in.  If he were Black or Latino, even more so.  I once interviewed a Basque student with the surname of Changala, and in order to help her eventual successful bid for admissions, I felt I had to describe as blonde-haired and blue-eyed so that she wouldn’t be visualized as a South Asian candidate.

So what is the ideal solution that addresses fairness, social engineering, and historical redress of disadvantaged groups?  Perhaps a hybrid of meritocracy with affirmative action seems best unless we consider that the affirmative action component must now be extended to the Caucasian students as well otherwise we would have a situation where race-blinding would exclude “White” kids from the meritocracy pool to an extent that would be not tolerated by stake holders.

In the admissions process, we look for intangibles to lift up non-Asian applicants because if it is entirely scores and grades, then diversity would suffer.  But since the goal of elite admissions is so central, the Asians just adapt to excel in all areas, such as athletic and extracurricular ones.

Just why is educational achievement so central in these cultures? Much of it has to do with the immigrant mentality but much is a legacy from the Confucian system whereby high stakes admissions exams were the sole criteria for elite college acceptance nd were also identity-blinded. In China, Korea, and Japan, high scores still can  make or break you for life. If you don’t believe me, check out this US NEWS and WORLD REPORT article on the best testing high schools in California and see what percentage of the students are of Asian descent.

In the end, the SFFA attacks on Harvard and UNC use anti-Asian policies as a Trojan Horse to attack disadvantaged minorities and for that reason, I am opposed to it.  Someday soon, race won’t matter and it’s a totally biologically fallacious concept anyway.  But for now, I can certainly understand why alums of UCLA balk when their school is known as University of Caucasians Living amongst Asians.

I recently joked with Kobe Bryant (whose kids attend my son’s school) about the Lakers improved chances of winning now that they have Harvard Asian-American player, the all-Ivy point guard, Jeremy Lin. Not sure he appreciated the joke but in the absence of an Edward Blum-led assault on Asian-American under-representation in the NBA, I don’t see any problems with the status quo there.  Haters like Floyd Merriweather aside, perhaps one day all our endeavors will have the racial representation that reflects those individuals’ talents and efforts. But when it comes to the “great equalizer” of education, the fight will always be political and based on a zero-sum mentality.