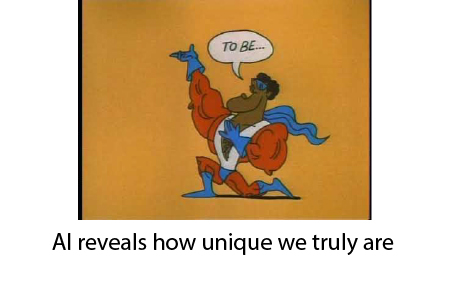 Machines will never be able to hold multiple meaning for multiple words and ideas, based on irregular and illogical contexts
1 Responses
Reading Time: 4 minutes
Human intelligence is unique

I’ve been thinking about my encounter with AGI (artificial general intelligence) and I have come to understand something profound about human consciousness and culture. I believe humans will resemble machines as we become more dependent and trusting, but machines will never approach human consciousness in any meaningful way.

Thesis: Current AI is a lame and will only become dangerously lamer

The first type of AI is the laughable versions like Alexa, Siri, et al that Peter Voss, founder of AGI innovations, likened to “trying to invent the lightbulb by improving the candle.”

The problem with brute force data mining AI is that it is based on statistical inference. The autofill on my email is turned off because I have no interest in what a machine thinks I want to type based on what others or even what I have previously typed.  Machines excel at rules-based things like playing chess or go, as I blogged about here, but they will never cure cancer if the parameters are set by people using faulty paradigms, as the MD Anderson concluded after firing IBM’s Watson as I blogged about here.

The future of AI is fascist and very lame. Hopefully, people will see it for the scam it is. Just because you overheard me talking about something or know I searched for it, then served me an ad, and recorded my purchase, that doesn’t mean bupkis to me. Sometimes I want a salad and just because you predicted pizza, I don’t care.

Antithesis: AGI – what I learned from talking to a machine.

When I had the privilege of interacting with AiGO, a type of natural language based software that reads, listens, and creates language and thought paradigms with on-the-fly learning, I realized how different artificial GENERAL intelligence is from the ‘candles’ of stupid data mining predictive AI.

The computer created polygons, linked by arrows, to listen and interpret what we were saying. Peter let me interact so I tried to trick the machine. The programmer said something like “my sister’s cat is named Daphne. They are at the vet.”

So I said, ” I call my car Juliet.” Polygons were created.  “I put my sister’s cat in my car.  Who is inside Juliet?”

And there you have it. No matter how many billions of dollars you put into AI, Siri will never be able to learn something idiosyncratic and unique to me so effortlessly. Siri would think about Juliet and Romeo, Juliet Binoche, not understand how someone non-human could be inside another proper named thing. A candle will never be a lightbulb.

Synthesis: Why humans are special

The differences between human and machine consciousness is revealed when you consider how inflexible Siri is and how dangerously flexible AiGO is. What if I tell my machine that all cars are named after women but in fact, they are not? My poor machine now has to contextualize all names to make sure we aren’t taking about cars. Now I tell my machine that only cats travel in cars but dogs travel in trucks. Whether I meant is maliciously, as a joke, or for no reason at all, my poor machine is now crippled by my “teaching” it stupid things. So my machine needs to create specific rules for me, the joker/idiot, and then generally accepted rules for the other contexts. We do that automatically and all the time and function well.

But if you apply the principle of teaching dumb things to human children with regard to concepts of identity, history, politics, science, and all-other dogma/fear based thinking and you the find the origin of a lot of ignorance and suffering.

This brings us to the hidden strength of humans. We use identity, context, tone, body language, and conditional rules to create thought and behavior. You might remember Data, the android from Star Trek: The Next Generation that tried to be funny. Chess is easy; comedy is hard. If Rosanne Barr tried to do a standup routine written by Dave Chapelle, she would face problems. Luckily, we are evolving together, rapidly, and to a higher consciousness of love. It is race between us and the rise of think allegedly thinking machines controlled by maniacal humans.

A machine has no identity but can still be received as being politically insensitive so the list of barred words, ideas, and expressions would make it impossible to act with savoir faire amongst humans.  As I discussed in this blog about the Covington kids  people know who is allowed to use “the N word” and immediately contextualize it based on perceived context cues. If you don’t believe me, read this blog where I explain how this child was called that horrible word in front of his friends and yet absolutely no one seems upset about it.

So, my friends, it is time to abandon the quest for artificial intelligence before it gets out of hand. Even with the current con of “quantum computing”, machines will never be able to hold multiple meaning for multiple words and ideas, based on irregular and illogical contexts.

Sure, machines can help manage, create new ideas, and serve…but they will never get goosebumps when something moves them. They will never have epiphanies. They won’t feel love, regret, and unfounded optimism. Viva the human race and wonderful spaces in between language, meaning, and actions! In those grey areas, we are alive and we love and that is what makes us the most amazing, talented, and scalable force in the universe. To live is to love and THAT’s what’s happening.

1 thought on “Human intelligence is unique”