Japan and U.S. cultures could not be more different
No Responses
Reading Time: 4 minutes
“I’m walking here!” vs. “We’re walking here!” – a study in cultural diversity

Japan and U.S. cultures could not be more different. Last night, as I and a bunch of pedestrians were walking through a busy intersection in Kyoto, a white haired woman beat ferociously on a car that had stopped too late in the crosswalk thereby forcing everyone to walk around both sides and side step onto the curb past iron gates. And a blog was born.

People of my generation will remember this scene from Midnight Cowboy (1969) in which actor Dustin Hoffman beats the hood of a taxi for almost hitting them in the crosswalk.

What seems like a very similar incident to what happened in Japan in fact couldn’t possibly be more different because of the choice of pronouns. The American pimp emphasized “I” not “we”. In American, people who harm others to gain massive power and prestige are idolized. In Japan, a person would never consider beating a car for their individual beef with a thoughtless driver parked in the intersection if it was just one person’s inconvenience versus another’s. But the Japanese ethos is such that since the thoughtlessness of the driver forced two dozen people to walk around their van, they deserved to be shamed and criticized. In Japan, the crime is always to be inconsiderate of the group.

I am staying in a hotel called “Hotel Ethnography” and it prompted me to explain the rather dubious history of my chosen college major to my son. It turns out that one of the seminal works of the field by Margaret Mead, Coming of Age in Samoa (1928), may have been the product of “trolling” by teens, misinterpretation, and a decidedly “etic” perspective. In anthrolpology, they taught us there was “emic” from inside the culture and “etic” from outside. If you want to learn more, read about the Mean-Freeman controversy sparked by interviews of the girls who claimed to lie to Mead when they were young.

I say dubious because in fact, there are few universal truths in studying culture with the exception that we all need to be connected to each other. The American psyche elevates a man who wants to spend his “winnings” on going to Mars instead of paying employees a living wage; this would be shameful in Japan where all people are honored for whatever work they are doing.

Last week, I was talking with my friend who related a story about a frantic woman who at a conference had cut herself and was threatening to finish the job. My friend sat with her and told her that she couldn’t stand the site of blood and that if she fainted, would the suicidal woman please phone her husband? This simple act of spiritual aikido shifted the woman back into human connection and she no longer wanted to kill herself.

Japanese culture and identity is rooted in a notion of amae which is the desire to be dependent on and accepted by others. The American mythological identity is the exact opposite. We celebrate the ability to cultivate one’s own power to the extent that you can do whatever you like to whomever we like. American heroes are the likes Bill Gates, Jeff Bezos, and Larry Ellison, who dream of mass vaccinations, colonizing Mars, and becoming Prosperos on their own island kingdoms.

Every morning, I get a pastry and coffee from my local Japanese bakery back in Southern California. When I mentioned I don’t like visiting Japan, my friend asked why not. I explained that as a very intuitive person, I find it exhausting to be constantly aware of everyone’s expectations. For anyone that has lived in Japan, they understand that to be inconsiderate or behave in a way that is out of alignment with others’ needs is unforgivable. In the US, where everyone is so obsessed with themselves and oblivious to others, it makes for a much more improvisational and unpredictable experience. Neither is better but it is just different. On the surface, Japanese people are the most polite, considerate, and thoughtful people you will ever meet. That constant manners and rules vigilance is a comfort and provides structure and comfort for them; their amae culture is arguably the most socially advanced in the world.

In the US, being thoughtful and polite is always optional and in most instances, doesn’t come easily nor is it even considered virtuous. Consider the strident and hostile actions of individuals embroiled in echo chambers of political theater. They are faceless and inconsiderate puppets like those in the Bunraku theater that we watched last night. 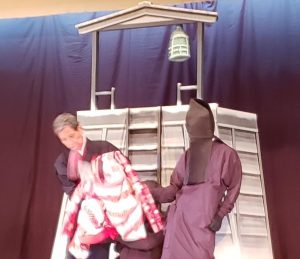 Demonstrations, tweets calling for violence, and now movies like The Hunt in which liberals hunt conservatives for sport are worrisome but predictable consequences of a culture obsessed with collectivist individualism over the once universal virtue of diversity of thought and equal protection under the law.