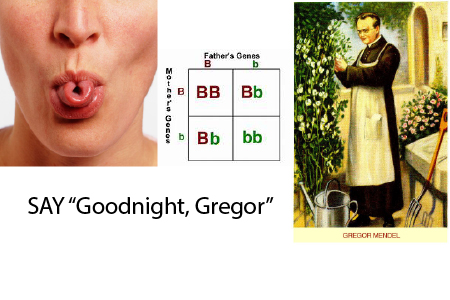 Believing that genes determine traits is like believing that the maker of your tires determines whether you will get a flat or not
No Responses
Reading Time: 4 minutes
It’s time to deprecate Mendelian genetics

Yesterday, I was talking with my son who was trying to understand Punnett squares and inheritance. So I began with what I thought was a simple question: “What is a gene?” His reply, “It’s DNA that encodes for a single trait.”

Thud. There was the problem. In the days of the Gregor Mendel breeding peas and oblivious to DNA, RNA, and proteins, he must have been very lucky, fudged a little, or peas are a very different organism from humans. I say that because when we look at single gene traits in humans, the list is very short indeed: attached earlobes, tongue curling, hitchhiker’s thumb, widow’s peak…there are less than twenty. Now that we understand that genes simply encode for proteins, I think it would be better to abandon Mendelian genetics except as a tool to understand gene segregation. It’s ability to explain traits and diseases is very limited.

To be clear, most of us get two copies of the exact same genes that we call normal, healthy, or wild-type genes for most proteins; we get one from mom and one from dad. There are minor variations but in general, natural selection and out-breeding keep those at low frequencies.

That means we get a 100% gene dosage of normal proteins. The ways in which diseases do or don’t manifest depend on just how important those genes are. Gene therapy can add an extra copy of a gene, revving you up to three copies or up to 150% gene dosage. When you have a BRCA1 mutation, like the kind that prompted Angelina Jolie to do prophylactic mastectomies, the entire story reveals just how wrong people are when it comes to understanding the relationship between genes and disease.

Firstly, BRCA1, like other all improperly named oncogenes, is not a bad thing; it actually is a tumor suppressor! Her increased risks are no caused by the mutation, which is a historical artifact of consanguinity; her problem is simply that her cells have a 50% gene dose of the normal variant.

I had a classmate write to me on Facebook about her macular disease and I advised her to take senolytic treatments to accelerate cell death. She thought I was nuts. When she was young, she didn’t manifest the disease. So when healthy copy number goes from 2 to 1 or 1 to zero, we have a decrease of gene dosage from 100% to 50% or 50% to nil. If you purge damaged stem cells in the retina, you have a shot at replacing them with younger versions with the original configuration.

So now that we understand that nearly all traits, from my very attached earlobes (which 23 and Me told me I shouldn’t have, to intelligence, personality, age-related diseases, and longevity, are NOT encoded by a single gene. To anthropomorphize, it is like saying that if you were born in a certain town, under a certain zodiac sign, you can predict what movies I like. We love the simple examples of blood type or specific diseases that manifest in Sickle Cell Disease or Cystic Fibrosis because they support a Mendelian world view that should have long before been deprecated once we understood what genes really are (recipes for proteins).

The very notion of a gene being dominant, recessive, incompletely expressed (penetrance) are merely fudge factors for explaining observed phenotypes despite the many ways a genotype can be expressed. This has to do with alternative splicing, gene silencing and expression, point mutations, and many other proteins and systems with which they interact. We are trying to save the notion that genes alone determine disease expression when in fact it is not that simple.

No, Oliver, genes do NOT encode for traits. They encode for proteins. You can count on your fingers and toes the number of traits that segregate to a single gene and even if you don’t have the gene for a sixth digit, you would still have plenty left over so Mendel’s single gene ~ single trait premise is fundamentally wrong. When we think of Dyskeratosis Congenita, or one of the premature aging syndromes, we see the folly in thinking there is a single gene to explain what we believe to be a single disease. We know that telomere shortening and premature aging are features of this disease but it can be autosomal dominant, autosomal recessive, or sex chromosome linked. The problem is often a less than 100% gene dose in any of the components of the telomerase enzyme, its RNA component, or the “key” to the lock (the dyskerin molecule), will lead to premature aging and death as a teenager. If you were looking for the gene that causes this disease, you would already have been asking the wrong question.

In conclusion, believing that genes determine traits is like believing that the maker of your tires determines whether you will get a flat or not. There are countless other factors such as driving, road debris, and how often you change them. Not only is genetics NOT destiny, in most cases is explains very little about what happens out there on the road of life. To understand more about the fundamentals of genetics and other systems in your body, read my book, The Telomere Miracle: Scientific Secrets to Fight Disease, Feel Great, and Turn Back the Clock on Aging.