As self-proclaimed guardians of the city upon the hill, we should all be perpetually leery of visionaries, prophets, charismatic leaders
3 Responses
Reading Time: 4 minutes
It’s time to stop believing in identity

Yesterday, I took a tour of the Simon Wiesenthal Center’s Museum of Tolerance and I was 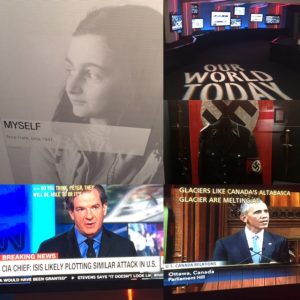 disappointed by the choice of CNN being shown in real time featuring “ISIS plans terror attacks in the US” and President Obama in Canada talking about the melting glaciers.

Throughout the exhibits, there was the tendency to steer the narrative away from common shared humanity into the story of monsters killing their victims.

When we look deeply at the history of genocide, we often fail to identify the root problem – identity. They showed a video about Darfur, Bosnia, Rwanda, Cambodia, Naziism, Armenia…but the question of why these rational and popular genocides occurred is not deeply explored. As we witness the rise of nativist fascism in the self-proclaimed free world, very few us have what it takes to speak up against intolerance and simply accept the world as it is.

Sadly, in a world with perceived scare resources and consensual fear, we all cling to identity. We don’t want to be part of one big human family; we want protectors, affinity groups, guarantees, and safety.

I was playing poker with some rich “white” guys and one of them, married to a Philipino-American woman, said “Asians are much more racist than Americans.” I didn’t contradict him but I disagree. I submit that lack of contact is an explanation albeit not an excuse for xenophobia which is endemic to Asian countries.

I love this country but in order to improve it, we need to understand it. It can be argued that the US is the most racist nation in the world and always has been because we have always legislated and normalized oppression under a banner of “white supremacy” (which managed to exclude Jews, Catholics and Irish). From slavery, genocides of indigenous peoples, The Chinese Exclusion Act, to the anti-miscegenation laws of the State of Virginia, whose motto ironically states “Virginia is for lovers”. After being jailed and forced to leave their state, this brave couple won the right to be married June 1, 1967 as told in the movie Loving 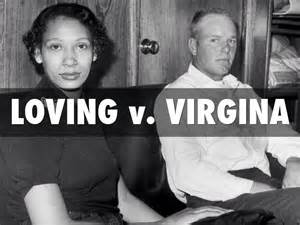 What are the two poles of human identity politics? Patriarchal fascism and Matriarchal syncretism.

Every organization, from best friends, to families, to neighborhoods, to religions, to nation states, to species eating other species- they all require active truth telling which is dubious and conditional at best, and hypocritical and self-serving at worst. They all create identity from the “us” and the “other”. In a patriarchal/conservative systems, father knows best and might makes right. Everyone must identify with the values of the one leader- that is fascism.

In the matriarchal/liberal systems, every being is equal because a mother wouldn’t favor one child over another. Everything is acceptable and all identities welcome. This leads to fluid codes of sexuality, religion, politics, and affinities and for many people, is also threatening. That is the syncretic truth of “I’m okay…you’re okay”.

In the final analysis, there is no perfect system. We can’t all worship one god and kill the infidels. Yet most people wouldn’t welcome a Mesopotamian and syncretic Sodom and Gomorrah where everyone worships everything and loves anyone.

As self-proclaimed guardians of the city upon the hill, we should all be perpetually leery of visionaries, prophets, charismatic leaders. Our best case for a “just-right Goldilocks” future is to seek a path forward that honors social justice, the rule of law, and common sense and decency.

For one Washington insider’s view on the past, present and future 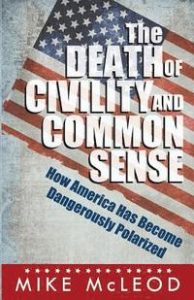 of American politics, read Michael McLeod’s “The Death of Civility and Common Sense: How America has Become Dangerously Polarized”

Judging by the deafening silence over concerns about deaths in Istanbul versus the narrative-coherent events which get 24hr news coverage by CNN, we can only conclude that empathy, which is at the heart of media-directed identity, is not a rationally distributed phenomenon. Perhaps it is our narrow definitions of affinity are the actual root cause of genocide. Love and hate are two sides of the same coin that reads “self and other”. Without love for your chosen affinity group, there can be no hatred of the perceived “other”.

For more information about the dangers of empathy, watch Yale professor Paul Bloom’s video on the subject:

As Tupac Shakur expressed it so well in “Changes”:

I got love for my brother but we can never go nowhere
Unless we share with each other
We gotta start makin’ changes
Learn to see me as a brother instead of two distant strangers
And that’s how it’s supposed to be
How can the Devil take a brother if he’s close to me?

As a student of biological anthropology, I have to say that the history of social anthropology is often complicit in perpetuating racism. You need only look up the origin of the word Caucasian to understand how stupid American racism really is. There is no such thing as race and the invention of the light skinned person of European origin is arbitrary and silly. Now that Turkey is coming back into the EU and Russia is out, what do we have for a theory of American whiteness? Have you been to Russia or Turkey? I have. People look like they could be from anywhere. 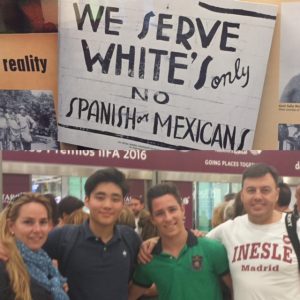 20th Century in California shown at the Museum of Tolerance saying they serve whites not Spanish people (although maybe they were protesting the language). Then consider this picture of my son arriving with his Spanish family in Madrid for a month. They look pretty “white” don’t they?

3 thoughts on “It’s time to stop believing in identity”