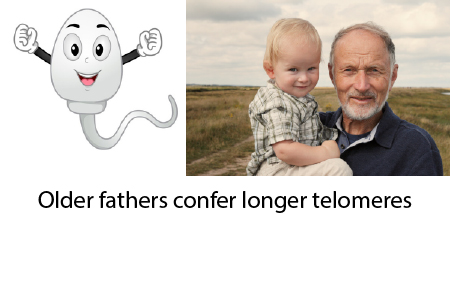 Just a brief posting about the role of fathers in determining telomere length. There is a lot of uncertainly about why this occurs, but the studies generally suggest that at least in humans, the older your father was when he donated sperm, the longer the telomeres you tend to have. See this study for more info.

Before you get all ahead of yourself in terms of what that could mean and why it exists, just accept that it is an observed phenomenon, not a story to be backfilled with hand waving.

The simplest explanation comes from the theory of evolution that suggests that germ cells, sperm and eggs, are responsible for the survival of the species and that they require a level of preservation (i.e. telomerase activity) that is higher than the regular, somatic cells of the body. To conserve the species, stem cells producing the sperm are granted with greater than 100% re-lengthening capacity, just in case.

In contrast to human woman, whose egg producing stem cells are established in utero, the literature suggests that advanced maternal age is not associated with longer telomeres and is definitely associated with more abnormal chromosomes. See this blog for my theory of human aging as an adaptation to kill women and then see the comments for a reader who explained this is not generally true across species.

Before selecting a mate based on this one datum, I would recommend caution. All fertilized eggs get a reset when they are conceived so you might as well mate with the younger man.  Also the unknown risks of epigenetic changes that may confer neurocognitive problems is probably not worth the risk. See this study for more info.