There was only one doctor who told him to do the opposite of the Polio experts and stay active and that was the only advice his soul was willing and able to hear.
No Responses
Reading Time: 3 minutes
Polio didn’t disable this superhero – it enabled him

This evening, I saw another superhero movie, Spiderman: Homecoming. It made me think of Gordon and many other of my patients with such incredible journeys. It is my privilege to hear their stories of heroism as they overcome the odds and the challenges of their “origin stories” to complete the archetypal hero’s journey’s purpose: to return to the world with the ultimate boon and teach the world.

Gordon came in to pick up some TA-65 on Wednesday and although he had mentioned his fanatical adherence to exercise and his childhood polio, he always struck me as genial and barrel-chested Johnny Weissmuller type who simply had a passion for yoga, calisthenics, and walking. Without a cape and spandex, I failed to see the super-heroic origins of his convictions.

On this occasion, this 68-yo elaborated how as 3-yo child, he was afflicted with polio and it particularly affected many of his joints and tendons, which were painful debilitated. He had a clubbed food, muscle wasting, and pain everywhere and as a result, he and his parents were urged to resign themselves to a life of disability and rest for the young Gordon. There was only one doctor who told him to do the opposite of the Polio experts and stay active and that was the only advice his soul was willing and able to hear. Gordon became a lifelong student of diet and adherent to exercise and takes no medications nor has any pain or illnesses despite this startling deformity that he never before showed me. 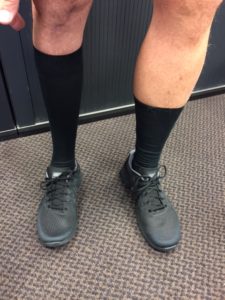 As a 40-yo, he suffered very bad post-polio syndrome and his once LARGER right calf, from walking on a clubbed right foot that was 3 sizes smaller, atrophied to this very thin remnant. With the benefit of a life of discipline, knowledge of diet and supplements, and a healthy skepticism for medical dogma, Gordon recovered from his post-polio syndrome and remains very active and healthy.

When we discussed the role of years of TA-65 (and Protandim) in his recovery, he agreed that supplements give him the ability to benefit from exercise rather than be injured by it. Furthermore, he firmly believes that stretching muscles and tendons has been the key to staving off the problems associated with aging generally and his post-polio challenges specifically.

The key line from tonight’s movie was regarding the super suit that would-be mentor Tony Stark (aka Ironman) repossessed from a forlorn, end-of-second-act, and insecure 14-yo Peter Parker (aka Spiderman):

Tony Stark: What if someone had died?

Peter Parker: I was just trying to be like you.

Tony Stark: I need you to be better. I’m taking back the suit.

Peter Parker: I’m nothing without the suit!

Tony Stark: If you’re nothing without the suit, then you shouldn’t have it.

I suppose what I’m trying to say is thank you to Gordon and all the other superheros who teach me daily. I have the privilege of sharing their inspirational stories with you because they, like me and you, are drawn to the light that only authentic struggles against ordinary dogma and faith in intuition and experience can provide.

One such hero, Reena Jadhav, recently interviewed me for a lively and extensive interview about my theories of aging for her channel, Healerpedia.com.She, like another person who cured herself of psoriasis with diet alone, used dietary modifications to forge a new pathway for holistic healing from some rare and debilitating conditions. I was happy to connect those two heroines and hopefully their stories will also inspire you soon on Reena’s channel.

Finally, I have been corresponding with 68-yo Steve, a 4-year patient with stage 4 pancreatic cancer, who taught me about cannabis derivatives and positive visualization in his ongoing battle with what should be 99% fatal by now. The doctors who promised he would be dead long ago are now sheepishly asking for Steve’s hard-earned wisdom from this man who forged his own treatment.

Perhaps we all have the ability to tap into our body’s natural healing capacity if we have the courage to focus less on what others tell us to focus on and instead listen to intuition and empiricism. Ironically, the truth is ‘out there’ but only if you can only look inside.

As mystic Swiss psychiatrist, CG Jung, who was a lifelong student of the hero’s journey in comparative religions said, “he who looks outside, dreams. He who looks inside, awakens.” 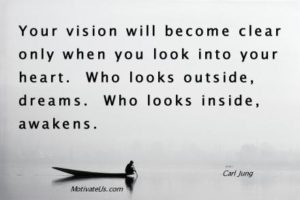