the silver lining of a Trump presidency might be better for veterans. Here is my reasoning based upon actual NEGATIVE beliefs about Donald Trump and my blogs:
1 Responses
Reading Time: 3 minutes
President Trump and Veteran’s Day

Some of my friends have absolutely become mentally unbalanced because of the Trump presidential victory. They have lost their Lokahi (Hawaiian word for ‘balanced flow’).  Their devotion to some media-generated narrative makes them completely unable to process the silver lining here. DISCLAIMER: I did NOT vote for Trump and so please don’t send me any more  “Ed Park is a racist” emails (already got one after 5 minutes of this post going live).

As we reflect upon Veteran’s Day, the silver lining of a Trump presidency might be better for veterans. Here is my reasoning based upon actual NEGATIVE beliefs about Donald Trump and my blogs:

Then WWIII is less likely. His opponent clearly had no problem with regime changes in Iraq, Afghanistan, Libya, and Syria. The Russo-Iranian vs Saudi/Israeli/US conflict was reaching Biblical proportions in cased you missed it with all the Kimye and Brangelina news.

Again, this is not a case where Hitler is annexing Poland and Czeckoslovakia and Charles Lindbergh or Neville Chamberlain wants to appease an imperial dictator. Having American soldiers stationed in 150+ countries means it might be time to bring some home. We will generate fewer Veterans of foreign wars and anyway, we don’t always take the best care of the ones who serve. 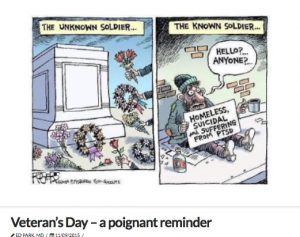 Since last Veteran’s day, people have taken to doing pushups on Facebook to raise awareness which is a great step. But we need to prevent wars and generate fewer damaged people otherwise we are advocating smoke awareness rather than fire prevention. And I find it interesting that the people who started the fires are never going to be held accountable but rather are roundly praised (such as Colin Powell and Condelezza Rice).

The upside here for veterans is that assuming he doesn’t abandon his constituency, those red counties disproportionately serve in the armed services and might have a stronger advocate that the previous presidents who, like Trump, never experienced war first hand. 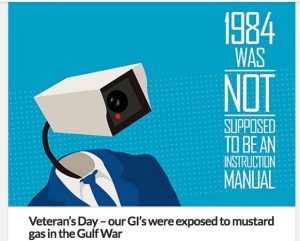 If you don’t think our previous regimes devalued soldiers, read this 2014 Veteran’s Day blog about the NY Times story showing the US ignored exposure of its own troops to American mustard gas. 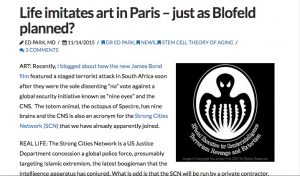 Again, this would be a net positive for generating fewer veterans. See this blog posting about the email I sent to the Assistant director of the Veteran’s Affairs Dept and a conspiracy theory about the possible required disclosure of a hidden agenda for humanity shown in the most recent James Bond film.

Remember all those times CNN was caught lying, staging, green-screening, rigging debates, and generally inflaming dissent and FUD (fear, uncertainly, doubt)? If you were pretending to be asleep, you may not.  The Brexit and Trump movements reveal that most people don’t trust 24hour global reality controlled by the few because they believe it is easy to threaten, bribe, or blackmail the ethics out of folks who have already done things to rise to power and affluence. It is not that the polling was inaccurate or that people were ashamed to tell pollsters the truth, it is more likely that the polling was a hybrid propaganda tool to manufacture consent.

If you want to honor veterans, then take care of them and make sure we don’t make more of them by being politically active. If we can get so many people to turn out for a Cubs’ celebration, why can’t we get people interested in ending poverty or rightsizing government?