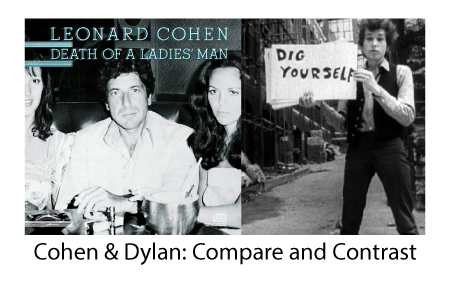 "I think that Bob Dylan knows this more than all of us: you don’t write the songs anyhow. So if you’re lucky, you can keep the vehicle healthy and responsive over the years"
No Responses
Reading Time: 3 minutes
Rest in Peace, Leonard Cohen. Go back to hell, Alfred Nobel

On Nov 7, 2016, singer-songwriter and poet laureate of Montreal, Leonard Cohen, passed away. In one of his last interviews just three weeks before dying, he stated that giving Bob Dylan a Nobel Prize was like pinning a medal on Mount Everest for being the tallest mountain. Lol. That is why we loved the man. 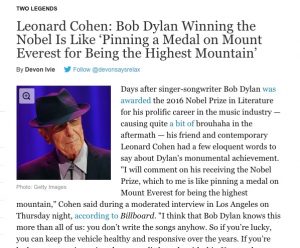 “I think that Bob Dylan knows this more than all of us: you don’t write the songs anyhow. So if you’re lucky, you can keep the vehicle healthy and responsive over the years. If you’re lucky, your own intentions have very little to do with this. You can keep the body as well-oiled and receptive as possible, but whether you’re actually going to be able to go for the long haul is really not your own choice.”

I was reminded of this tonight when I finished two chapters of my book in five hours despite having worried about it for five weeks. In something psychiatrist Mihaly Csikszentmihalyi called the “flow state”, when we do something that requires high skill but for which you have high competency, the ego is not a limiting factor and you effectively become a stenographer for some greater creative forces at work. This is the great pleasure and addiction of those who have toiled to become creative.

I remember reading or hearing Cohen say that it sometimes took him years to write a song whereas Bob Dylan said he could write one in minutes. It just goes to show you that time is elastic and the process of creation is deeply personal and mysterious.

I was fortunate enough to hear Leonard Cohen sing just four years ago and he was so full of wit and vigor despite the fact that his body had become less “well-oiled and receptive” than it once was. I think what I appreciate most about Leonard Cohen as a man and an artist is that he never shied away from the dark side of himself; his ability to express complex and painful emotions without abandoning himself resonates deep truths of our shared humanity and makes his ouvre poignant, witty, charming, and so indelible for many of us who loved his art.

In contrast, this year I had the privilege of hearing Bob Dylan in concert and his setlist was mostly cover songs and the two hits that he played had altered meters and styles. He never once spoke to the audience and it was like he was reliving the trauma of the Newport Folk Festival in 1965 when the audience turned on him for going electric. Half the audience wasn’t even born when that drama happened but Dylan has been the consummate non-panderer since. Portrait of the artist as an grumpy old man, I suppose.

What makes me love Dylan even more is his indifference to the Nobel Prize committee that wants to give him a Nobel Prize in Literature. This is truly life as art and politics.

Established by the inventor of dynamite, the Nobel Peace “Peace” Prize has been awarded to many controversial figures and is largely an accolade worthy of winning because everyone consents to believing it. Kissenger delayed the end to the Vietnam war to get Nixon elected. Yassar Arafat was no saint, and Barrack Obama was given the award for not being George Bush, I suppose.

When I think of what the people who try and continue to use TA-65 or my Recharge supplement share, it is that they tend to be entrepreneurs. People who live by the graces of money doled out by a corporation tend to have a deep trust of authority whereas people who succeed from venturing out on their own tend to trust their intuition. So kudos to Bob Dylan to snubbing the Nobel Prize committee; he lends much more credibility and status to them than vice versa and declined to be co-opted by “the man”. He clearly “digs himself” and many of us do as well. Now how many of you would be cool enough to say “I got plans” when they call to give you a Nobel Prize?