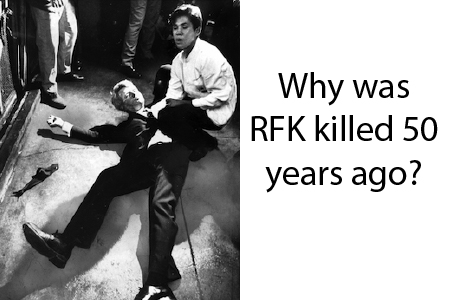 When pubic figures of gravitas are gunned down or crucified, it is likely that they were representing ideals that do not serve the powerful
No Responses
Reading Time: 4 minutes
RFK killed 50 yrs ago – Bhutto explained why 29 yrs ago Today, I voted in California primary. Unlike two years ago, when it was in some dude’s garage and I got a numberless piece of paper, we were again voting at the local temple. There are conspiracy theories around why that might have happened. We don’t know how much time remains before full censorship so if you are curious, look into it sooner rather than later.

Last evening, I had dinner across the street from the RFK Community schools, on the site of the old Ambassador Hotel where RFK was killed. There are conspiracy theories around that murder if you are interested. After dinner, I also enjoyed a brilliant set of Jazz by a musician whom I have heard twice before. I was impressed by Josh Nelson’s Bhutto Song, a piece in honor of slain Pakistani prime minister, Benazir Bhutto. As expected, there are conspiracy theories around her murder as well.

I met Nelson when he played with my classmate, Anton Schwartz, also the Harvard Class of 1989 and Jazz musician. Tonight, I listened again to the speech that 29 years ago, Anton and I heard Benazir Bhutto give at our commencement address.  It it, she eloquently extols the virtues of democracy and human rights after having recently won her place as prime minister. She also describes how and why democracy is constantly undermined by forces conspiring to manipulate the narrative. When we think about the murder of JFK, RFK (only two months after MLK), and Bhutto, we encounter a similar theme. They sought to resist corruption, enhance freedom, and increase transparency.

History is complicated. Everyone is ethically compromised on many levels.  It was the former McCarthy aide and JFK’s Attorney General, RFK, who authorized the state surveillance of MLK on the grounds of Russian/Communist collusion. Yet they became allies towards the ends of their lives. As Cornell West says, “It’s not about purity; it’s about integrity.”

So when compromised people (i.e. everyone) abandon the guiding principles of freedom and democracy, they get to live long lives in the public eye. In contrast, when pubic figures of gravitas are gunned down or crucified, it is likely that they were representing ideals that do not serve the powerful and in lieu of justice, they are granted eponymous apotheosis in the form of schools, roads, and myths.

Bhutto’s address reminds us that the advances in democracy are not likely to come from so-called democracies, where smoke-filled rooms and long knives still make mischief. Instead, we need to, as Buckminster Fuller suggested, build something that renders crony democracy obsolete. Luckily, this has already happened three months ago in Sierra Leone’s presidential election using blockchain technology.

Bhutto repeated this quote “When enslaved, life is reduced to a small rivulet, In freedom, it is like a boundless ocean.” -Allama Muhammad Iqbal

She ended by saying to us “you will go, you will see, and you will reform. And in so doing, you will live up to the Harvard motto, veritas”. Oddly, the same message was delivered to me and my son’s graduation class of Phillips Andover only two days before. The student explained that he was cognizant of the wealth, power, and influence that would be garnered in the young men and women but warned them and the institution to always serve and be about the business of continuous improvement while doing so.

I think the most telling postscript to this blog is a conversation I had with an investment professional about blockchain. He and I agreed that the architects of the financial debacle of 2008 should have been held accountable instead of enriched. I disagreed that the entire economy would have collapsed. So the insolvent banks gobbled up the solvent ones, people lost homes, bonuses were paid, and we have increased the debt from 9 to 20 trillion. The thing he said with the moral clarity of Machiavelli was that he was opposed to blockchain because it can’t be interpreted by lawyers and spun. It is too factual and therefore dangerous. Maybe it was the cocktails, maybe the very honest and intellectual tone, but I was shocked. Indeed the ability to determine facts is the enemy of all assassins, politicians, and social media influencers.  Read this blog if you are interested in blockchain as a disruptor of civilization.

We can argue about the reasons and justification but I would venture to guess that the majority of young people in America can’t name the only country that used nuclear weapons against civilians in the past, twice. Problem: history and everything else is run by the most sociopathic among us. Solution: blockchain to at least get the facts right.

History tells us that a lone deranged gunman killed RFK. That is generally agreed upon fact and not a “conspiracy theory”. Whatever the actual facts, they won’t easily replace the truth narrative as we currently accept it.