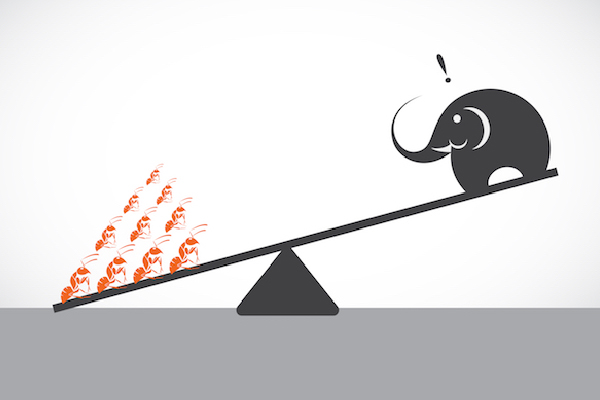 Imagine a world where all transactions, from conversations, emails, votes, purchases, and campaign contributions were a matter of permanent, transparent, and universally-accessible record to all
1 Responses
Reading Time: 4 minutes
Why Blockchain the most disruptive yet emancipating technology ever created

I would like you to consider three technologies that have shaped human knowledge acquisition. In this blog, I will argue that the one-two punch of internet computing and blockchain technology could actually represent a final step in our evolution as a species.

When we consider the advancement of collective knowledge, I can point to three significant technologies: The Library of Alexandria, The Guttenberg Bible, and Blockchain technology (that powers cryptocurrencies like Bitcoin).

Phase 1- The House of Straw: A wide and deep collection of wisdom. Alexandria was a center of culture and commerce for about eight hundred years. During this time, there was a policy that every ship that docked would be searched for scrolls of parchment which would be confiscated and a copy returned to the ship’s crew. This cost of doing business meant the Library of Alexandria had a model for massive accretion of knowledge from all corners of the world.

Of course, the high cost of maintenance and flammability of scrolls meant knowledge was vulnerable to those in power who were offended by it. This included Roman Emperors, Christian Patriarchs, and Muslim Caliphs, who each had turns in destroying volumes in the Libraries and Serapheum of Alexandria.

Of course, artists, scientists, and even reformers of the church would always need to be wary of what was printed, lest they end up in prison or worse as the result of going against the prevailing authorities seeking to weigh in on what is scientifically or morally acceptable. Luckily for tyrants, books can be burned, revised, or better still, left unread in favor of more engaging pursuits.

Phase 3- The House of Bricks: Blockchain technology. Enter the humble invention of Bitcoin in 2009, which was an open source software platform for creating a virtual digital currency. The reason blockchain technology represents a revolution in collective consciousness is the same reason that it works as a form of value storage.

Unlike a book or library that can burned or a history or definition that can be changed or redacted (see this blog about the redefinition of the word “fascism” by Google and others). the blockchain is constructed to be much more resistant to tampering.

Blockchain technology is designed to be decentralized, tamper-resistant, and unredactable. I will attempt to explain how it works using cryptocurrency as an example although the general example would apply to other applications such as accounting, voting, and even storage of information from the canonical Holy Bible to lists of AAA baseball season records.

The meaning of “crypto” or hidden in cryptocurrency comes from the fact that the blockchain is an unbreakable thread of information, or database that requires blocks to be deciphered by computers guessing at secret codes (i.e. cryptography).

“Miners” for blocks have access to new transactions submitted to the open source mining community and they all have the opportunity of using computational technology to guess at the code, decipher it, and by validating new entries, thereby gain the tokens as reward for adding it to the distributed open ledger or blockchain.

Once a block has been verified by peers, there is no remaining token incentive to discover a block that has already been mined so the miners move on to the next task in search of new reward. There is no reason to doubt what is already accepted and no ability to change is retroactively.

The system rewards decentralized miners and since the database ledger is a collective work in progress, no central authority has the power or ability alter the countless, totally agreed-opon versions of the pristine and identical blockchain database ledger as it is actively being created.

In a post-blockchain world, acts committed during times of war would be recorded for all participants and not whitewashed for the victors and over-simplified for the vanquished. There would be no backdating of stock options or misrepresenting one’s voting record when a blockchain accountancy takes over.

The reason that blockchain technology could usher in an age of anarchy, in the best sense of the word, is that is is a technology that is diffuse, decentralized, resistant to redaction and fungibility. The subversive nature of the technology to would-be tyrants is the low yield for even attempting to subvert something that is transparent and ubiquitously assembled by disinterested, selfish, and mutually-distrusting parties. Trying to alter truth in the era of blockchain would be like an crippled elephant trying to resist being consumed by ravenous ants.

Imagine a world where all transactions, from conversations, emails, votes, purchases, and campaign contributions were a matter of permanent, transparent, and universally-accessible record to all and you can imagine heterotopia in which a group like Wikileaks is not only irrelevant but actually unnecessary.  What did your candidate buy and how did he or she get the money? Just search the blockchain. The objection that bankers use against cryptocurrency is that is used for shadow transactions with anonymity. But it seems that the meta-moral objection is that if blockchain were made possible for a wider range of accountancy (both intellectual and commercial), it would weaken the capacity to burn, coerce, and redact the truth that oligarchs rely upon to govern the world effectively.

The ownership of intellectual property ranging from invention patents to clever phrases that could be indelibly recorded in a permanent ledger might ignite an absurd race to squat all possible stories, phrases, and ideas; this would require human and AI collaboration to adjudicate. Think of the nightmare of squatters rights from the early days of registering anything.com in the early internet and now apply it to creative AI’s generating Shakespeare-like stories with the competence of Shakespeare, rather than monkeys. Not so far fetched when you realize that AI is already generating pop music and screenplays.

Although certain opinions ranging from climate science to movie reviews are highly subjective, what would cease to be fungible in a post-blockchain world would be important facts such as dates of birth and death of people such as Jesus of Nazareth or Caesarion  (the son of Julius Caesar and Cleopatra). The establishment of the 4th century Nicean version of Constantine’s Bible is one stark example of historical and monumental redaction that left a lasting impact on Christianity’s legacy (see the Nag Hamadi Texts for more info). What was parsed out but still deemed somewhat valuable by some sects of Christianity are called the deuterocanonical (second canon) or apocryphal (hidden away), which now carries the unfortunate connotation of being of dubious origin. Just as the cryptocoins of Ethereum and Bitcoin underwent schisms of believers, Emperor Constantine’s Nicean Creed was the first “hard fork” of Christianity caused by a desire by early Christians to codify what was previously a living and organic creation.