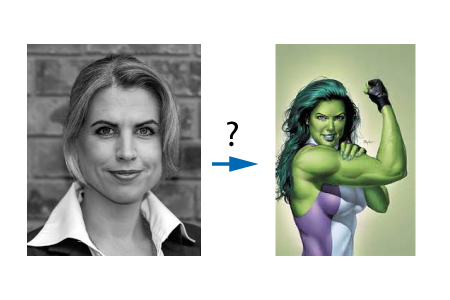 Meet Liz Parris, CEO of BioViva, who last week divulged that that she herself was actually "Patient zero" or first patient was transfected. We are left to hope for the best, say thanks to Liz Parrish for taking a bold step towards her own personal immortality, and will watch and wait.
No Responses
Reading Time: 3 minutes
Superheroine, madwoman, or trailblazer? Why choose?

I recently blogged about three things that all seem to converge on this Liz Parrish story – elephant cancer, gene therapy, and transhumanism. Meet Liz Parris, CEO of BioViva, who last week divulged that she herself was actually “Patient zero” or  first patient to be transfected.

BioViva did this in Latin America to avoid US regulators and their therapy will introduce extra copies of the telomerase gene and a myostatin inhibitor protein.  Theoretically, this could give her cells more ability to maintain telomere length and inhibit the myostatin protein, which signals to stop building muscle. morphology?  Too many unknown unknowns to say but you have to say she is courageous for doing so and hope that she remains healthy and doesn’t become a zombie or a hypertrophic person: As I blogged about here, introducing the virus into all cells, not just the critical stem cells, could contribute to novel behavior in the made-to-dispose of non-stem cell population.  This could lead to an altered ecology of her cells with poorer natural apoptosis by the Hayflick Limit (natural aging deaths of non-stem, non-telomerase active regular cells).   In my Stem Cell Theory of Aging and Disease, I liken the stem cells to queen bees.  Queen bees make the shorter-lived drones, while Stem cells which have higher rates of error correction, take the better cell organelles, and can immortalize with telomerase, make the somatic cells, which are normally destined to die out in 40-60 cell divisions, although if Liz Parrish’s transhumanist quest plays out well for her, perhaps not. To understand transhumanism, see this interview I did with Zoltan Istvan, the Transhumanist candidate for US President.

Responding to this recent blog, my proofreader, Jerome, pointed out that elephants having 20X the copy numbers of a cancer-protective gene watchman doesn’t necessarily mean 20X the cancer detection.  Not sure if that’s true or not but I guess you could argue that having 20 smoke detectors in your home may not improve detection if they are operating at the same level of efficiency.

You may ask what is the difference between taking a so-called telomerase activating herbal extract and this?

Firstly, in my experience both as a patient and physician, I have not observed an unopposed, linear, or arithmetic growth trend in leukocyte telomere lengths. So like the growable length of eyebrows changes little with time, there appear to be self-regulatory, cell ecological, cyclical, or apoptotic factors that keep the average lengths from increasing.

Secondly, we know from gene activation studies that the so-called telomerase activation is an emergent property, and NOT directly related to increased gene expression of the hTERT transcript.  The actual mode of action may be signalling-based as elucidated in this Valenzuela et al paper.

So- we are left to hope for the best, say thanks to Liz Parrish for taking a bold step towards her own personal immortality, and will watch and wait.  As for the users of TA-65, some of whom are going on 8 years, I can say that the long term effects from a transient, mild, telomerase-encouraging product are not grossly deforming nor do they appear to pose a health threat.  The benefits have yet to be proven but many folks rank it as one of the best things they have ever tried and these tend to be folks who have tried nearly everything.