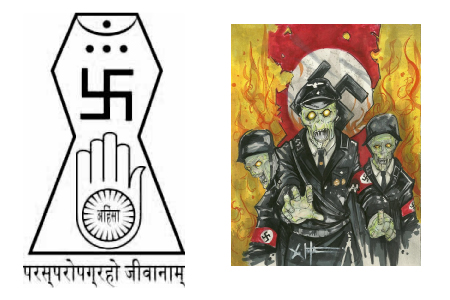 We are all murderers but the question is to what extent we are asleep, pretend to sleep, or are just incapable of grasping the immense cruelty that exceptionalism fosters in our politics. Is it our conscience that doth matkh cowards of us all or are we in fact just pretending to not know what is happening?
No Responses
Reading Time: 5 minutes
To eat or not to eat- that is the question for Jains or for Zombies 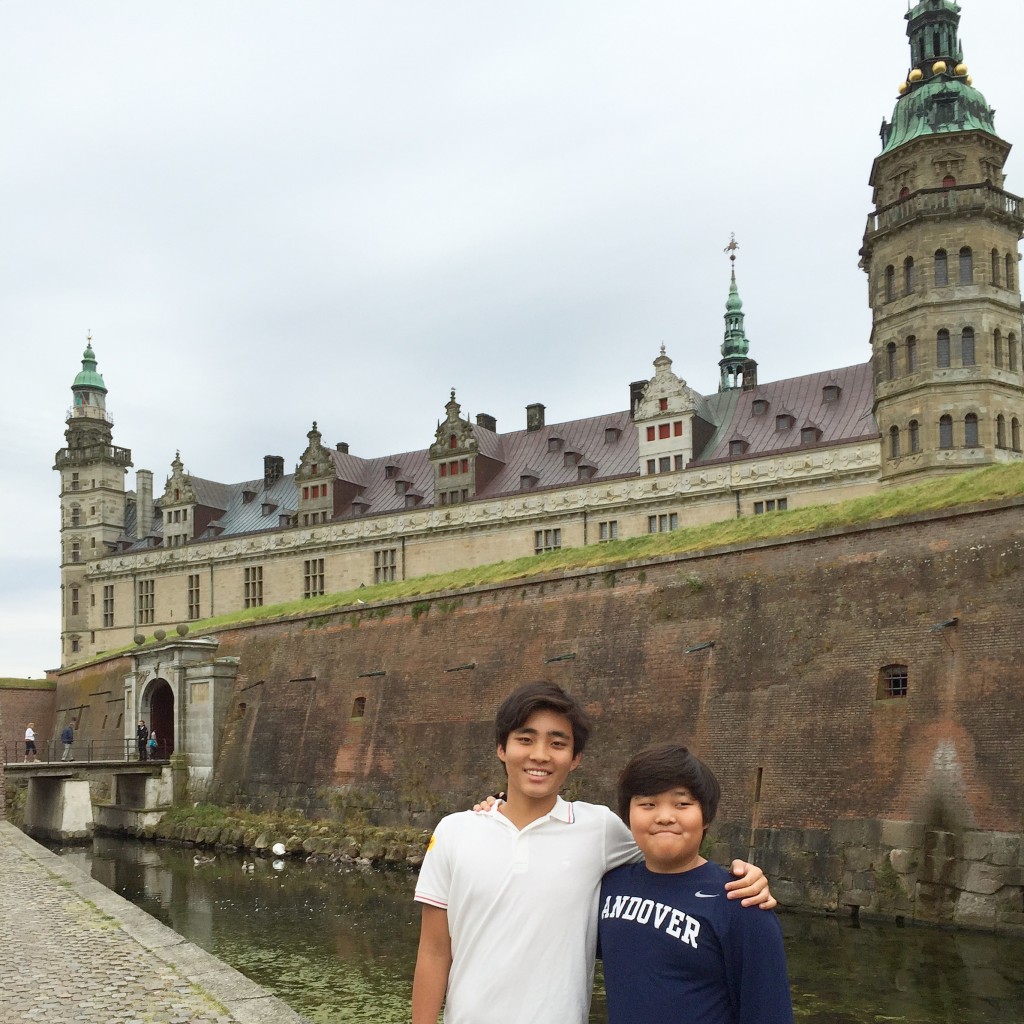 Driving home, I was listening to an NPR Fresh Air interview about Tracy Stewart (Comedian Jon Stewart’s spouse) and her Farm Animal Sanctuary.  It made me think of three things- Hamlet, Hamburger Hamlet, and Dinner with the Jains.

These are my kids standing in front of Kronborg Castle, the site upon which Hamlet is staged. Hamlet’s soliloquy about whether life is worth it is cited below but I want to highlight that his main thesis is that mere ignorance of whether there is indeed an afterlife is the main deterrent to desiring death.

I didn’t listen to the interview with Tracy but it did bring to mind the recent news story that the cruelty-free in vitro meat that once cost $325,000 now costs $12.  If one could not taste any difference and the two were the same, why would anyone choose to eat farm-raised animals? 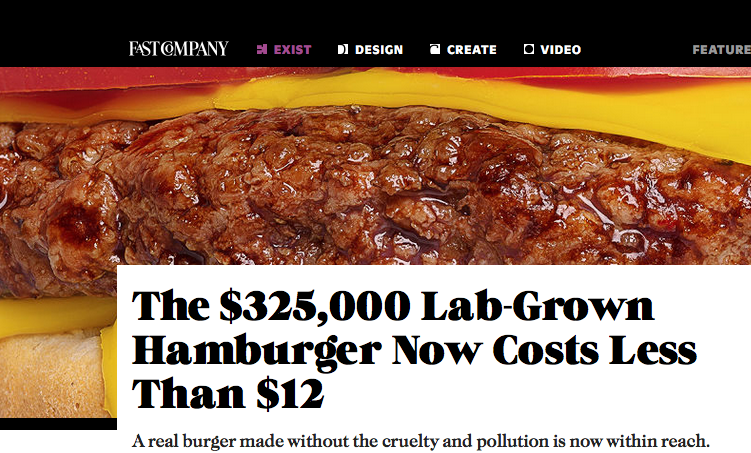 Now, if you were to ask a being in the beforelife whether they would like to be incarnated as a cow for slaughter or just remain non-existent, what would the answer be?  Logically, if animals are non longer needed for meat consumption, then they would no longer be born.  So is it crueler to farm animals to be raised and slaughtered or to be forced into extinction through non-existence?

“Hamburger Hamlet” is just the convenient name of one of my favorite restaurants that we used to go to in Pasadena but if you were to ask an actual Bovine Hamlet whether he would rather not have been born and lived knowing the eventual fate of him and any progeny, what would he say?

Lead singer of the 80s band, The Smiths, wrote a song called  “Meat is Murder”.  The subject of meat being murder came up one fine evening while I was dining with a nice Jain couple in Fiji a few years back.  They dined vegetarian and I was enjoying my lobster when they very politely challenged me asking “do you know how they prepare it?” 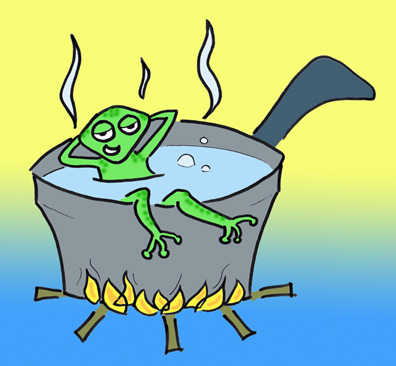 Of course, the notion of being boiled alive doesn’t sit well with any sentient being but if American Politics is any lesson, if you raise the temperature slowly enough, it can be quite pleasant.  This brings to mind a snarky comment I wanted to make in the elevator today when two attorneys were talking about hoping for more for more “seasoned lawyers”.  And wasn’t it the Bard who said “The first thing we do, let’s kill all the lawyers”?

Anyway, at my dinner with the Jains, I took up the challenge and asked the famously non-violent disciples of Jainism a series of rhetorical questions:

“Don’t plants know they’re being killed and eaten?” – “Yes, that’s why our priests can only eat fruit that has fallen from the tree.”  Doh! I thought

Undaunted, I asked, “Isn’t using soap an act of killing millions of bacteria?” – “Yes, that’s why they can only bath with water”   Doh! Checkmate you sneaky rinsers…

So bad news, Tracy Stewart and all would-be ahimsa practitioners- you are in fact a murderer unless you eat fallen fruit and bath only with water.  For the rest of us, cruelty and murder are the cost of living.

The real issue is whether we can live at peace with ourselves as murderers.  I know I pay my taxes and don’t protest that much of my money goes towards killing in the name of my country.  I eat meat and harvested vegetables and don’t worry about killing microbes when I brush my teeth.  My loyalty is reserved mainly for my species and not for the sanctity of artificial life forms or bacteria.

For this chapter in human evolution, I suggest we forsake the questions of cross-species ahimsa and maintain our biases towards animals that we find share qualities we like about ourselves, like primates and cetaceans.  Once we can consider 1,000 African children the moral equivalent of one lion or our own family pet, we can graduate to higher levels of humanitarianism, whatever that means.

I would suggest that the cow, if it has been something nobler in a past life, might say, go ahead and slaughter me, I’ll take my chances in the next life.  But for our fellow humans trying to work out their karma, chances are they desperately just want clean water, shelter, income, and freedom from murder and oppression.

We are all murderers but the question is to what extent we are asleep, pretend to sleep, or are just incapable of grasping the immense cruelty that exceptionalism fosters in our politics.  Is it our conscience that doth make cowards of us all or are we in fact just pretending to not know what is happening?

I believe that the popularity of superhero movies was a subconscious reaction to American foreign policy post 9/11 in which we felt that superhumanity was a fundamentally American trait of exceptionalism justifying an American policy of “policing” nations which would then crumble into chaos.  The popularity of zombie films may be a subconscious manifestation that the body politic has been infected with mindlessness and the inability to be fully human.  I wonder if there is a new popular genre waiting to be born?  That of the humans living for the sake of human consciousness elevation?  Maybe romantic comedies where lawyers decide to become marine bioligists?   Time will tell, as Bob Marley once sang:

Jah would never give the power to a baldhead
Run come crucify the Dread.

Time alone – oh, time will tell:
Think you’re in heaven, but ya living in hell

And, as promised, in the words of the immortal bard and his Danish Prince Hamlet:

To be, or not to be- that is the question:
Whether ’tis nobler in the mind to suffer
The slings and arrows of outrageous fortune
Or to take arms against a sea of troubles,
And by opposing end them. To die- to sleep-
No more; and by a sleep to say we end
The heartache, and the thousand natural shocks
That flesh is heir to. ‘Tis a consummation
Devoutly to be wish’d. To die- to sleep.
To sleep- perchance to dream: ay, there’s the rub!
For in that sleep of death what dreams may come
When we have shuffled off this mortal coil,
Must give us pause. There’s the respect
That makes calamity of so long life.
For who would bear the whips and scorns of time,
Th’ oppressor’s wrong, the proud man’s contumely,
The pangs of despis’d love, the law’s delay,
The insolence of office, and the spurns
That patient merit of th’ unworthy takes,
When he himself might his quietus make
With a bare bodkin? Who would these fardels bear,
To grunt and sweat under a weary life,
But that the dread of something after death-
The undiscover’d country, from whose bourn
No traveller returns- puzzles the will,
And makes us rather bear those ills we have
Than fly to others that we know not of?
Thus conscience does make cowards of us all,
And thus the native hue of resolution
Is sicklied o’er with the pale cast of thought,
And enterprises of great pith and moment
With this regard their currents turn awry
And lose the name of action.- Soft you now!
The fair Ophelia!- Nymph, in thy orisons
Be all my sins rememb’red.