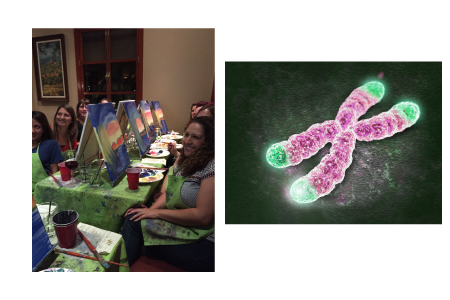 Last week, I had the pleasure of seeing a 71 and 74-yo couple who have clearly improved while taking TA-65.  The gentleman had survived a heart attack , no longer had basal cells plaguing his face, and both their blood pressures and skin elasticity had improved.  He asked why out of the dozens of close friends that he had told about the supplement, none had bothered to take it seriously despite their concerns over their own waning health. I get that remark a lot from long time users and believers in TA-65 and the best analogy would be like asking people to paint this painting that the artist/instructor held up.

I took these photos at a recent Paint Nite outing where about twent-five amateurs come together over blank canvases, armed only with wine and finger foods, and committed to having a fun time trying to do what seemed impossible before beginning.

(You can sign up for Van Gogh’s Irises or Starry Night and a host of other works but of course, most people wouldn’t know how to just walk up and paint something like this.)

In order to construct a fully credible story around telomerase activation, it is a process like painting!  Let me outline it. 5. Finally, you have to accept that you actually painted a painting that you weren’t sure was possible. This is the acceptance that something so basically true, logical, and undeniably beneficial could be real despite the fact that no one thought you could create it.

Eventually, given enough time, support, and freedom to explore, we all came up with pretty convincing versions of the work but we had to each assemble the painting according to our own brushstrokes, color mixing, self-doubt, and fascination.  But we all did it and as with understanding the benefits of telomerase activation, you can too!  It just takes a leap of faith and a creativity with your life that is latent in all of us. If you ask someone just to paint, they will say no.  But if they sit down for a while and actually do the steps, they create a work of art.  The same holds true for believing in telomerase activation. There are a lot of reasons to disbelieve but the experience of creating that belief is what makes the rate of discontinuation so low for people who have used telomerase activators for over a year in my clinical experience.