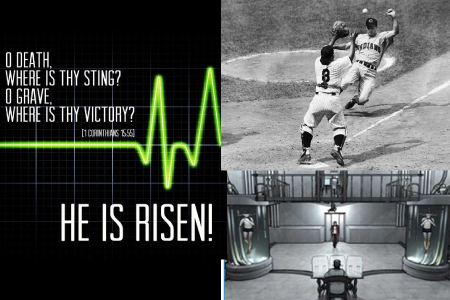 Perhaps the loss of one's own heartbeat will someday be as final as being tagged out by Yogi Berra at the plate.
No Responses
Reading Time: 5 minutes
Yogi Berra, synchronicity, and life as a metaphor for baseball

Yesterday, we lost a great soul in Yogi Berra at the age of 90. He was an All-Star catcher for 15 of his 18 playing seasons and is notable for being a clutch hitter of anything and for playing catcher in the only perfect game in the World Series (1956).

But the thing that we most associate with Yogi Berra, and that which inspired the cartoon character of Yogi Bear, was his way with language. 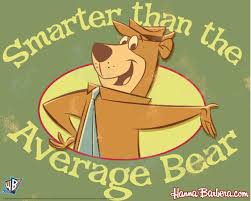 His oft quoted witticisms, many of which he may not have actually coined, are known to us all:

“When you come to a fork in the road, take it.”

“Nobody goes there anymore. It’s too crowded.”

“Ninety percent of the game is half mental.”

What, can we say, is the essence of a Yogi Berra quip?  It is a statement that seems obvious, naive, or just plain wrong in a literal sense; yet depending on how deeply you want to consider it and the level of depth you credit him, it could seem quite profound, like a zen koan.

Lawrence Peter Berra may not have been the rapier wordsmith like Oscar Wilde but neither could Oscar dig a ball out of the dirt for a golfed home run.  Interestingly, he got his nickname because he sat with his legs crossed, like a Hindu Yogi, although by most accounts, he witticisms were not created in the spirit of an inscrutable savant or fakir.

One of his most beloved sayings is “It ain’t over ’til it’s over” and that made me think of Ted Williams.

It is no secret that Ted Williams was cryogenically frozen. Synchronicity is an odd thing; today I received two reminders of my own odd association with cryonics.

First, I received an invitation to a Halloween Party by David Kekich, long-time cryonics advocate and founder of the MaxLife Foundation.  At his party last year, I met a gentlemen who told me his mother was lying in rest next to Ted Williams.  It was at that party that we literally recorded a video to say goodbye to our friend, Dr. Stephen Coles, the founder of UCLA’s Gerontology Research Group, who was kind enough to invite me to speak to his group and who also gave me a thoughtful book endorsement for Telomere Timebombs before he passed away:

“In my view, Dr. Park has chosen the correct attitude for us to think about the process of aging…For example, he first asks, not if aging will be slowed, but ‘When will aging become a thing of the past?’ He then answers, ‘Aging will soon become a choice rather than a curse.’ Dr. Park’s writing style and persuasive logic are a pleasure to read.”
— L. Stephen Coles, M.D., Ph.D.,
UCLA’s Gerontology Research Group

Steve died not very long after that video was recorded from cancer but the message was clear from the gathered faithful of about fifty people:  you are loved and we will meet again.  Dr. Coles did elect to undergo cryonic suspension and we can only hope that the premise of the restoration of the hard-coded mind of this great man is not fundamentally flawed.

The second synchronicity was a cryptic email I receive today from a slightly eccentric acquaintance who wrote “We can help Coles.  We know billionaires.”  I responded to this cryptic message lightheartedly but it made me think of the recent Ben Kingley/Ryan Reynolds movie that I blogged about here, Self/less, that uses the same plot device of my own graphic novel, Maximum Lifespan, 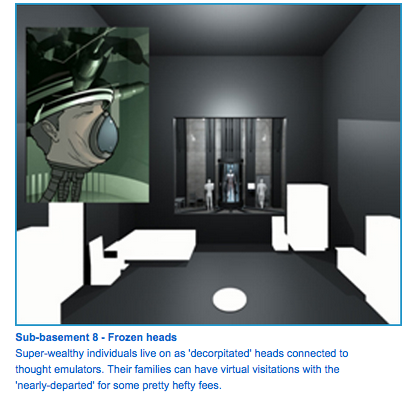 in which billionaires that used today’s tech are still in the game by interfacing their decorpitated heads to virtual reality tech into a 3D interactive hologram room, like in Star Trek: The Next Generation, and are planning to use consciousness transfer to take over cloned new bodies. 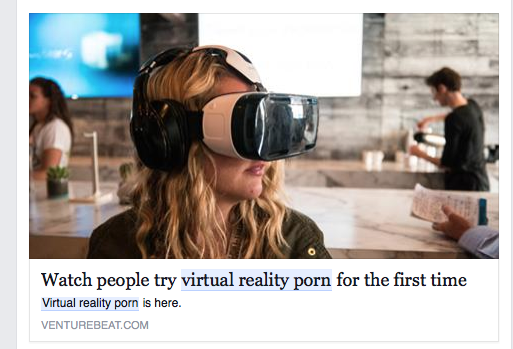 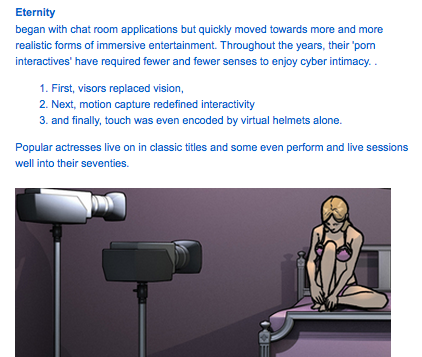 In Maximum Lifespan, the company that developed interactive adult entertainment was called ETERNITY and the picture shows a brief outline of their evolution.

So, to bring it all home, back to home base as it were, perhaps the loss of one’s own heartbeat will someday be as final as being tagged out by Yogi Berra at the plate.

If the transhuman tech contained in my graphic novel come to fruition, such as cybernetic virtualization, cryonic resuscitation, and symbiogenesis (the creation of new life from hybridization of species with man), then perhaps death is just one at bat and it really ain’t over unless you want it to be. 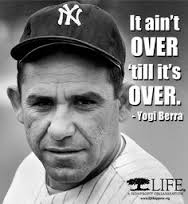 Postscript: I do not personally advocate cryonics given the available technology. They are betting on future tech.  What would I guess are the odds of successfully being restored out of cyronic suspension on some future date given the current means of preservation? Maybe 12:1, or roughly the current odds of  the 2015 Cubs winning the world series as predicted in Back to the Future 2

But then again, when I used to deliver babies, I didn’t recommend cord blood banking because the odds of a child or relative needing those cells for a post cancer allograft seemed so small. Now I realize that your best copies of pristine DNA were in the stem cells that those parents stored and they can be used to reconstitute their children’s organs, I see that my vision was limited by the company’s own marketing myopia.