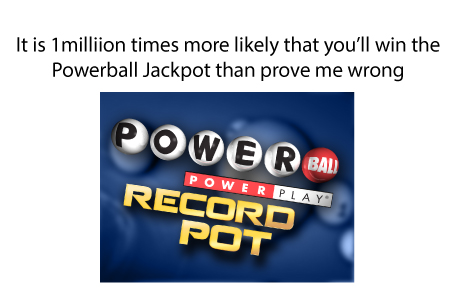 They concluded that there was a dose-dependent relationship between all causes of dying and shorter telomeres. The "p-value" is the estimate that this relationship was due to random chance. That p-value was 0.000000000000002 or 2 in 1,000,000,000,000,000 odds.
No Responses
Reading Time: 2 minutes
You are one million times more likely to win the Powerball Jackpot than prove me wrong

Thanks to our patient Karl, for bringing my attention to this Danish study by Rode et al in the Journal of the National Cancer Institute:

They study looked at a lot of Danish people and reviewed their telomere lengths, telomere-shortening gene mutations, and causes of eventually dying for up to 22 years (median of 7 years follow-up).

This chart showing the deciles and the odds of dying steadily increasing doesn’t look random to me. It looks like the shorter your telomeres, the higher the chance of dying even after accounting for the contribution of chronological age, which we know is associated with shortening of telomeres.

What was cool about this study is they looked at three genes known to be associated with telomere shortening. Since you have two copies of a gene (one from mom, one from dad) there are 0 to 6 alleles (or copies) of those knocked-out genes you could have and that was called the “Allele-SUM”.  This shows that the higher the Allele-SUM, the worse your telomere lengths were:

So for you people who don’t believe what I’m saying is true, think about the fact that there are thousands of articles linking telomere shortening to disease and death and that the chances of this relationship between shorter telomeres and higher mortality being random is one million times LESS likely than the chances of you winning the Powerball lottery.

What are the odds of your growing ill and dying if you do nothing and allow your telomeres to erode? About 999 in 1000.  I’d like to give one person in a thousand a fighting chance because someone is reading these blogs, right?

Postscript: Oh, if you still believe that all this is random, then I would like to offer you fractional ownership of a toll bridge on the dark side of the moon that monkeys who type Shakespeare own and operate next to a quaint bed and breakfast run by Jim Morrison and Bruce Lee.