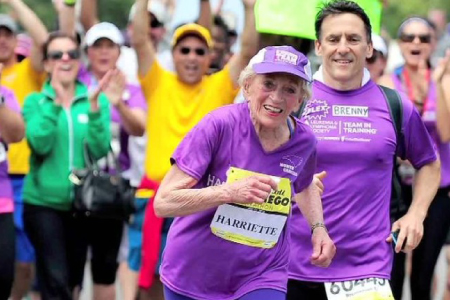 After achieve negligible aging, a 92-yo marathoner won’t even be a spectacle worthy of note as I blogged about here about a race between two 90-yo men.

All that aside, Harriet Thompson, given the fact that we haven’t yet realized negligible aging, deserved her moment in the San Diego sun: Some day, such a story will be a Babar-like relic, like a talking elephant was a colonialist tool celebrating what a marvel that a beast from Africa could be taught to be a proper European. Do you know the fable behind the run from Marathon to Athens?  Phidippides had to run from Marathon to tell Atheneans about the miraculous rout of a Persian Army four times its strength.  Because of his heroic run, morale was raised and the city refused to surrender to the Persian Fleet that was racing against the soldier messenger with their own message of hopelessness.

In the war against aging, are you like a hopeless Athenean, ready to hand over the keys to the city?  Perhaps you haven’t heard the news yet? Our battle against the relentless foe of aging is being won with the help of telomerase activation.