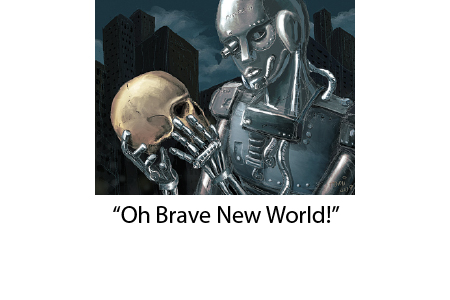 AGI will hopefully do both the deductive and reductionist science that elucidates the "key in lock" models that we love, but also create multifactorial and conditional models
2 Responses
Reading Time: 4 minutes
Artificial Intelligence may have to cure aging for us

There are three types of AI and the last one is the most promising. The first type is a task specific AI where the machine is only able to a specific task, according to rules. As magical as the chess, Jeopardy!, and Go playing computers seemed, they were just doing a task with speed and brute force.

The second type of AI is machine learning. These applications, such as those used in advertising, are using largely statistical methods and data mining to create predictive models based on massive amounts of user data. This type of AI purports to know what you want before you want it but it is flawed and perhaps even dangerous because it profiles and then pigeon holes you based on what it predicts you are thinking or, even worse, what it wants you to think.  This type of AI is fundamentally dehumanizing although it can make some pretty good Netflix recommendations. But it will never predict that you want something different because you are bored.

The final type of AI has also been called artificial GENERAL intelligence, or AGI. This so-called third wave is something quite different and I have had the pleasure of interacting with it. Using natural language and a kind of machine psychology, it actually constructs flexible and accretive knowledge schemas that are don’t just create the illusion of thought but rather the actual structures of logic and understanding. If you suddenly want to watch movies outside your genre, it has absolutely no problem adjusting, unlike the current second generation AI. It is rehumanizing because the user experience conforms to you and continues to learn and adapt.

Now to the part where AGI cures aging. When I went to a lecture by Theoretical Physicist, Neil Turok, as mentioned in this YouTube interview with professor Stephon Alexander, Turok mentioned that biological systems are much more complex than physics.

It didn’t quite “land” when I first heard professor Michael Rose say it in this interview, but after spending recent weeks thinking about AGI and after many years of hearing laypeople and experts take overly simplistic opposing sides on various aging topics, I better appreciate the benefits of AGI in understanding biology and potentially curing aging.

The poor quality of the questions and the need to simplify data are intrinsic aspects of human thought. Witness the firing of IBM’s Watson by MD Anderson for failure to cure cancer despite throwing $80M at it, we found that the problem lay not in our stars of AI but rather our selves. It was like asking a can opener to explain why Starry Night is appealing. Firstly, cancer is not a homogenous, single-cause entity. There was never going to be a right answer so why bother asking a machine?

The larger problem is our penchant for simple explanations. In most cases, regulation of biological systems is not a simple feedback loop with single-task signaling molecules. We love to think of glucagon and insulin as the hot and cold water of blood glucose regulation but the truth is that even in this case, there are aspects to how they function that are not amenable to a simple canonical models.

Now think about the many thousands of biochemical signals that interact with genetic, cellular, and organ systems to create our complex homeostasis. The language of cell ecology is far too complex for us to ask the right questions and we always seek to oversimplify the data we collect. We are a species of storytellers first and the devil and the beauty is often lost in the details we ignore.

So I suppose the future of biological wisdom will have to be discovered by AGI using ideas that we can’t even conceive of. A machine intelligence won’t assume that once it has found a single use of a molecule that it won’t have other uses or other modulators of its effects. Machines don’t have confirmation bias and egos like humans do. An AGI could look at all the gene products over time and in response to changes, their RNA splice variants, and then examine the proteins and actions that they produce. In doing so, it can create its own non-dichotomous interpretations of how and why certain cascades and actions were created. To learn more about the dangers of false dichotomies in language that degrade our thoughts, read this blog, or simply try discussing politics with someone.

We are still very early in the development of truly thinking machines, but if you want to get in on the ground floor you can look into the AiGO token initial coin offering or ICO here.

The interactions that I have had with this AiGO lead me to believe that the future is in this third generation of general artificial intelligence. If you have ever had a frustrating experience with the lack of common sense of Alexa and Siri, you will find AiGO to be much more flexible and adaptable. As far as personal assistants and software co-pilots, AiGO is a better user experience.

The really exciting applications for modeling biological systems will come when we train and then turn loose AGI to discover its own models. Despite our relative inability to understand these theories simply, AGI will hopefully do both the deductive and reductionist science that elucidates the “key in lock” models that we love so well, but also create multifactorial and conditional models it can then use to make recommendations back to its human clients.

When it comes to aging, there are likely no magic bullets, single genes, or easy ways to mitigate global cellular dysfunction arising from genetic and epigenetic changes. To look for such an easy out with AGI would be to ask it to reanimate road kill. But that doesn’t mean that we, with AGIs help, can’t imagine more predictive models and devise more robust ways of intervening in biological systems.

Disclaimer: The mention of AiGO is not investment advice and I have no investment or financial affiliation with the creating company, AGI Innovations. Minimum investments by accredited investors can be considered after due diligence and at the investor’s sole discretion. I do not know if a liquid secondary market for these tokens will exist in the future and do no know how soon the tokens will find their use cases. That said, I do believe this AiGO is a fundamentally different kind of AI and one that will continue to improve in its cognitive abilities and usefulness.