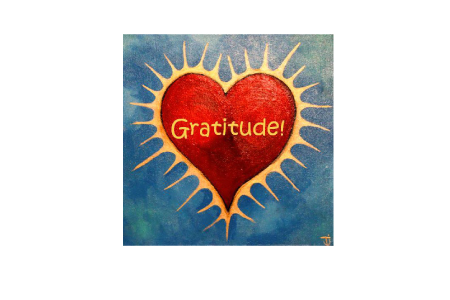 We have a choice in every moment to maintain balance, integrity, grace, and kindness simply by being grateful. Or we can drift to the dark side and live in blame, regret, and fear.
No Responses
Reading Time: 3 minutes
A tale of two “Blade Runners” – one grateful and one angry I haven’t been blogging for a while but I feel compelled to tonight. My niece was injured in a very funny accident. She was dragging a metal plate around for a performance art project and yesterday, she was going down the stairs and the plate started following her. Unable to avoid it, it sliced her Achilles’ tendon in half.

Instead of being angry or disappointed, she was laughing. She even entertained four passersby who each asked “what happened?”

She told them her tendon was severed, they said “no way”. Then she showed them. When I spoke with her, she just expressed a sense of gratitude for all the support and is not down about it. Look at her expression in the actual moment…it is utter fascination at the absurdity of life.

This image, from the area outside my office contains many poignant symbols.

On the left, we see the Chinese zodiac art installation with the red ribbon around the red rooster. What you can’t see is that one of the pillars was the dragon which oddly, was struck by a falling tree about a year ago shortly after a friend of my sons’ named Dragon was killed by a falling tree in Yosemite. It remained the only missing tree until last week when all the other 15 trees were razed because of weakness in the roots amidst high winds. There was an orchard two weeks ago with the one missing dragon tree. Now there aren’t any trees.

The duck in the pond is a Mallard drake that has come back every year for the last five years; this year, he has no female mate with him. Things change. Is the duck happy or bitter about having lost eggs to a hawk in previous years?

On the right are empty offices that used to be filled – it was the Bank of America Repo division; all the homes have been repossessed. Are the people who lost homes angry or happy rebuilding their lives? Are the former bank employers bitter for losing work?

This week was sad because two of my patients passed away. 90-yo Harold Rosen’s obituary can be found here and here. Here is a blog from two years ago when Harold was still swinging on the rings. A second patient was the infirmed 89-yo father of two loving sons who despite his father’s protestations, occasionally slipped him TA-65 saying it was an anti-oxidant. Both families felt the TA-65 helped increased the quality of life for years.

We are all going to have metaphorical plates slash us, trees fall upon us, mates leave us, and all our possessions (including our lives) taken from us. But are we living in gratitude and reaping the rewards of what life is showing us? Are we enjoying our time here? We have a decision to make in every moment-  to maintain balance, integrity, grace, and kindness simply by being grateful. Or we can drift to the dark side and live in blame, regret, and fear.

“Quite an experience to live in fear, isn’t it? That’s what it is to be a slave.”