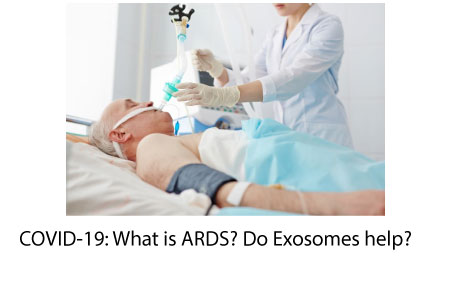 Within 24 hours of exosome treatment, the COVID patient with ARDS showed decreased requirement for oxygen and pressure and within 5 days, he was being extubated.
9 Responses
Reading Time: 6 minutes
COVID-19 update: Exosomes for ARDS?

In my first four posts about COVID-19, I attempted to explain 4 things:

In this fifth and hopefully final blog, I want to explain the final common pathway of how people perish from this disease. The problem is something called ARDS (Acute (previously adult) Respiratory Distress Syndrome).

In a nutshell, when you get an overwhelming infection of the lungs from any cause, it compromises the host and invites other pathogens like viruses, bacteria, fungi, and parasites to join in. The body creates an inflammatory response which does collateral damage to the lung’s cells. This results in fluid accumulation, increased leakiness, decreased surface “sealant” resulting in collapse of air sacs, and makes the lungs something like a very dirty, soaked sponge instead of a dry and open sponge that can accept air and provide a functional barrier to the world while it exchanges O2 and CO2.

You can get ARDS from fluid overload, massive blood infection (sepsis), pancreatitis (which releases detergent enzymes into the blood), trauma, burns, and drug reactions. However, the most common cause is pneumonia, or infections of the lungs. What do all these things share? They trigger a vigorous immune response known as inflammation.

Once you have ARDS, your chance of dying is around 40% which can be higher or lower depending on host factors and treatment. If your local health system is overwhelmed and there is no ventilator, you are MUCH more likely to die since you cannot breathe. There is no standard treatment for ARDS that works other than support with mechanical ventilation and hoping the immune/inflammatory system can down-regulate while you also correct the underlying causes. Host factors influencing death from ARDS include preexisting conditions such as COPD, hypertension, diabetes, and immune senescence. Treatment consists of anti-microbial therapy (if caused by an infection) and careful management of fluids and ventilator settings as fluid overload and overzealous ventilation can contribute to lung dysfunction and damage.

It is very difficult to treat ARDS because all physiological processes require efficient oxygen and carbon dioxide regulation and so the host is in a state of compromise. What exactly is inflammation? This is much more complicated a question that you would imagine.

Basically, think of a bee sting. When you get stung, there is pain, swelling, heat, pain, and itching. These changes result from increased vascular permeability and the rush of white blood cells to the area that release more signaling molecules. Inflammation is not a good thing or bad thing- it is needed to bring the bodies defense mechanisms to bear but it can also cause damage if it is excessive. That is what occurs in ARDS. The so-called “inflammatory cascade” or “cytokine storm” occurs when the complement system, interleukins (signaling molecules between white blood cells), histamine response, and vascular permeability all go into overdrive. The sponge gets soaked and we need that sponge to exchange gases.

Naturally, inflammation is down-regulated but in the context of ongoing infection and damage, the “fire alarms” in this diagram may never shut down.

Last week, my colleague Dr. Doug Spiel did something historical. He used 20B IV MSC exosomes to treat a 320lb man with ARDS who was being mechanically ventilated. Within 24 hours his requirement for oxygen and pressure decreased and within 5 days, he was being extubated.

Click the link below to listen to his interview describing the treatment protocol.

Would this have improved so quickly without the therapy? Unknown but unlikely.

How would such a treatment work? Well, we know MSC exosomes from a placental source are strongly anti-inflammatory and engender growth and regeneration of tissues. I would think the main mechanisms were from from acute inflammatory TH1 phenotype to TH2 anti-inflammatory phenotype and decreasing vascular permeability (see this blog on leg swelling). Immunologist and founder of Kimera Labs (makers of exosomes) also believes the exosomes may also be directly competing for cellular machinery (i.e. ribosomes) by getting their mRNA expressed over that of the RNA virus (direct communication.)

For the 30-40,000 people domestically and 600,000 people globally who die of influenza yearly, a treatment that could mitigate inflammation during ARDS would be a true game changer. If this exosome success can be repeated in a clinical trial, then Dr. Spiel may have just transformed the way we treat critically ill patients with ARDS and potentially the horribly high mortality of this common and deadly consequence of respiratory infections, especially in elderly patients.

To most people, the doomsday projections of massive dissemination and poorly sourced mortality statistics informed their panicked “reasoning”. The UK took a lot of criticism but now they shifted from “herd immunity” to self-isolation recently. That said, those experts whose dire predictions informed many of the pandemic modelers have changed their tunes; now, those experts in the UK predict they will have enough ICU beds and ventilators, they downgraded the Covid-19 outbreak from “high consequence” to NOT “high consequence”,  and the original Imperial College predictions of Neil Fergusen who predicted that 500,000 deaths could occur have been recanted with less than 20,000 predicted.

Without pointing blame, the epidemic of ARDS from Covid-19 in Italy (where there weren’t enough beds and ventilators for a sudden surge) and the densely populated NY (where they closed 20,000 hospital beds in the last 20 years)  do no necessarily represent the best models for ICU bed planning elsewhere. To have Governor Cuomo ask for 30,000 ventilators represents a staggering lack of common sense akin to hoarding toilet paper. With only 50,000 hospital beds in New York, preparing for over half of them being ventilator capable beds represents a gross overestimation of the likely utilization.

When all is said and done and the curves start to flatten as they did in China, Korea, and Japan, the sad thing is that, as I’ve been saying all along, the magnitude of the flu in terms of cases and deaths will be much larger yet people will believe Coronavirus is some kind of “airborne AIDS” instead of something similar that 100% of us have been exposed to and defeated many times in our lives. The level of trauma caused by this has already transformed our society and the relatively low final numbers will only reinforce true believers in their religious conviction that draconian measures “worked”, praise god. No amount of science, data, or relative comparisons will challenge what has essentially become a new religion. Much to the disappointment of the fear-mongers that are now self-proclaimed experts in pandemic modeling, the numbers associated with this unfortunate incident will be orders of magnitude less than influenza, cancer, heart disease, car accidents, and all other causes of death.

My final conclusions on this matter is that social distancing and shutting down the economy do “flatten the curve” but the costs to people and liberties may not be worth it. Research into mitigating aging should be a focus because as with all respiratory epidemics, they attack the elderly.

It would surprise many to learn that we ALL have had Coronavirus infections many times in the past because it is known as “the common cold” aka CoV299E -(99% presence of antibodies (aka seropositive), and CoV-OC43 (100%- seropositive) in one study of healthy people.

To be fair, this COVID-19/SARS-Cov-2 (aka CoV-WIV-1), probably from pangolins and bats, may be more virulent than CoV-229E and CoV-OC43 although perhaps we are witnessing a massive case of selection bias and confirmation bias. If you are sick enough to be admitted to the hospital with those “common cold” strains, then you chance of dying would be  22.7% and 11.6% respectively (I can no longer find this reference but I will try).

So could it also be that only our own inflammatory response of internet and cable news-mediated mass panic, group-think, and “overabundant caution” triggered the deadlier version of metaphorical ARDS in our body politic.

In 2009, Swine flu (H1N1) infected 1.4B people and killed 200,000 worldwide and in the US alone it infected 22M and killed 4,000. With the Covid-19 outbreak showing numbers that are thus far a relatively small fraction of those statistics (except for the US deaths), one wonders why the actions taken and the lasting cultural transformation never occurred at that time.

I hope that as the tide turns from social isolation and experimental treatment protocols, I won’t have to blog any further about this unfortunate business. In the meantime, I leave you with 12 esteemed medical and public health experts who are brave enough to be “whistleblowers” and veritable Ellen Ripley’s against the “alien” Coronahysteria despite facing a lot of blow back from the “game over, man!” types (played by Bill Paxton) who currently dominate public discourse on the subject. I plan to obey all the public health edicts and encourage you to do the same. That doesn’t mean we can’t maintain reason and debate the risks on all sides. Sure, I say to myself, “sit down, you’re rockin’ the boat” but so far…the Lord hasn’t woken us from this terrible dream.

It isn’t the virus that kills you, its the inflammation. Just like it isn’t the fear that destroys you, it’s your inability to think rationally that allows the really bad stuff to creep up on you. There isn’t a rational person on the planet that thinks Covid-19 will kill everyone; but there aren’t many rational people on the planet who don’t support the suspension of civil liberties to stop it. Restructuring the economy, emptying the prisons, suspending habeus corpus, mandatory vaccinations for travel, fining people for walking about, banning gun sales, banning free speech, location tracking of Covid-19 patients…where should it all end?