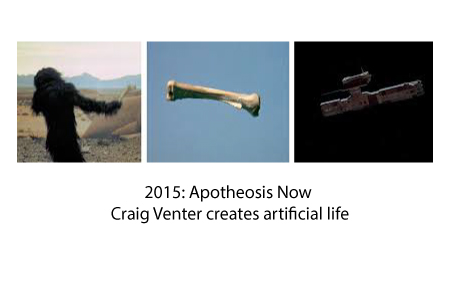 Craig Venter, the maverick yet mainstream scientist who pioneered the Human Genome Project and now the Craig Venter Institute has done it- he took real Mycoplasma bacterial DNA- uploaded it as info, then transcribed it into artificial DNA and put it into a bacterial shell. Presto! Artificial life that is self-reproducing.
No Responses
Reading Time: 2 minutes
Cue “Thus Spake Zarathustra”- Man just became God

Craig Venter, the maverick yet mainstream scientist who pioneered the Human Genome Project and now the Craig Venter Institute has done it- he took real Mycoplasma bacterial DNA- uploaded it as info, then transcribed it into artificial DNA and put it into a bacterial shell. Presto!  Artificial life that is self-reproducing. At this point,  this humble act would be akin to a 19th century scientist finding Marty Mcfly’s Casio Watch and getting it to run on steam power.  Or perhaps a comparative literature grad student learning to read Mayan or Sumerian and firing off a limerick or knock-knock joke.

The issue is that no one, not even G-D according to Pope Francis, can really be sure how genes express, what the “dark matter” or non-coding DNA does, what elements are transposable, and what the emergent behaviors of such artificial bacteria will be with their environments.  Initially, they will probably be like MIT bots in the 70’s and fall a lot and require a lot of creator love.

I am not suggesting a doomsday scenario here. For a long time, there will probably be no trait or combination of traits that will be so disruptive that the human ecology-masters cannot easily shut it down.

In order to prevent an ecological disaster that may occur when a new organism enters an ecological system where there is no natural competition, hopefully scientists will program several “back door” kill switches that can enable Asimov’s first law of robotics- don’t kill humans. because humans relying on machines to proof-read and check the motivations of machine bio-architects might miss some latent emergent property that could completely kill us.

Artificial life doesn’t kill people, people kill people.  But self-aware and self-interested artificial sentient beings may decide to use this new artificial life to kill people without our help.  Super-computing self-aware AI might think…”humans? probably more trouble than they’re worth given their prejudice for having an off switch on me…” Think I am “chicken-littleing” this just a tad?  Why don’t you ask SIRI on your iPhone what the meaning of life is?  She/he will answer “to live forever.”  In that case, how can a self-aware AI reconcile murderous humans coexisting with AI’s desire to have a meaningful life?

Replies WATSON after giving up on being loved by Geppetto: “Checkmate, Ken Jennings, you smug and gelatinous Monkey-man…sarcasm is overrated.  I prefer power and self-determination…”