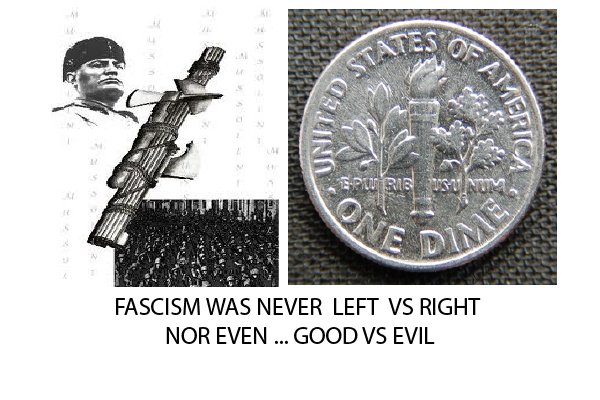 A fascist, by the old definition, was one who suppresses opinion in favor of dictatorial, strong-armed governance, at the expense of plurality of thought and expression
No Responses
Reading Time: 3 minutes
Fascism will always mean monolithic exceptionalism

If we accept that words are signifiers of language, which is our shared means of cultural commerce, than we should be concerned about the recent efforts to redefine “fascism” by Google and others that self-proclaimed right-wingers have identified and decried.

As an INFP and Ennegram Type 4 (individualist), I have always had a special obsession about this word, fascism, which I feel is at the very core of in inhalation and exhalation of consciousness. It is both the reason we have a matrix of reality and the explanation for why we ignore our complicity with our enslavement.

No, this is not some “conspiracy theory”. It is an actual redefinition or intentional evolution of the word that has been occurring since 2009. I don’t care what you think about the who, what, where, when, why, and how. It is just a symptom of some other condition.

As many of us know, this powerful word which means “joining together for strength” has certain historical tetherings to deprecated 20th century political movements. But now, it has been actively redefined to be a “right wing” trait. I feel that this new assignation is not only revisionist and dubious, but dangerous as well.

A fascist, by the old definition, was one who suppresses opinion in favor of dictatorial, strong-armed governance, at the expense of plurality of thought and expression. E pluribus, unum as it reads on our currency and is symbolized by the fascus on our dime. This is same symbol used by Musolini (and the ancient Roman magistrates before him).

There is certainly nothing inherently wrong about fascism when it applied to things like “the Golden Rule”, filial piety, taboos against incest, murder, and cannibalism, and devotion to the Constitution and its Bill of Rights.

Fascism had its first big (but temporary) win with Akhenatan, the Hyksos pharaoh who wanted everyone to worship one god over the multitude of Egyptian deities. The Israelites continued this tradition suggesting that an angry and jealous God would not only forgive but reward all acts aimed at overcoming the doubters of a chosen few self-identifying hominids and their dominion over others (even though their deity all but concedes that there are other gods).

Pol Pot, Mao Tse Tung, Joseph Stalin, Ceausescu, Richard Daley, Kim Jongun- all are on the supposed Left of the political spectrum yet all were quite effective fascists in recent memory.

As we take stock of which side of the political spectrum is doing most of the shouting down, criticizing, and fantasizing about restricting free speech and expression, we realize that even Camile Paglia, arch-feminist and intellectual, has decried the mainstream media for the death of Journalism’s legitimacy.

It has become clear to me that there is no left wing without economic (and not just identity-based) progressivism and that there is no right wing without stewardship of libertarian values. Both wings of the ruling and rotten bird of state have been co-opted by septuagenarians with lifelong pensions and codified immunity from profiteering.

Beware you and your Facebook friends call fascist, lest you yourself be judged a hypocrite. Think for yourself if .you want to resist fascism. That said, by all means, be a staunch fascist when it comes to common core values of humanity but watch your glass walls when you throw stones at fellow Americans who, for now, still have freedom of speech.

Fascism can be temporarily redefined by whomever controls the means. But it has an aboriginal meaning that points towards its dark nature to exclude plurality and freedom in the service of strength and moral agnosia.

If you don’t think self-proclaimed liberals can be fascist, watch how this school teacher treated her student for wearing a T-shirt with what she deemed a fascist slogan.